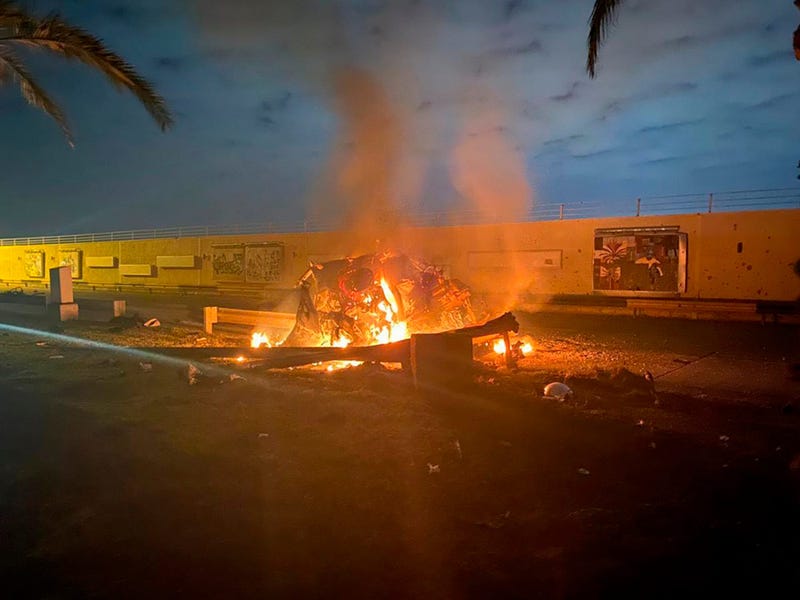 How big is this? Joe Cirincione, an expert on affairs in the Middle East, explains.

Iran's supreme leader says, "harsh retaliation is waiting." The country's foreign minister on Twitter calls the strike a "U.S. act of international terrorism" and "extremely dangerous and a foolish escalation."

Iraq's outgoing prime minister says the U.S. is violating the conditions for troops being there.

As tensions between the U.S. and Iran are taken to another level, the U.S. is ordering all Americans living in Iraq to get out.

The Pentagon put out a statement saying President Donald Trump ordered the airstrike. Soleimani was in charge of Iran's elite Quds military force. U.S. officials say he was planning future attacks on American diplomats and service members in Iraq and the Middle East.

Officials also say Soleimani has been responsible for the deaths of hundreds of Americans since the U.S. got into Iraq. The latest, was an American defense contractor killed on Dec. 27.

However, David Martin, CBS News National Security Correspondent at the Pentagon, says the U.S. has always been very cautious with Soleimani.

"One of the things that has always held the U.S. back from going after him directly is the consequences it would have in terms of the confrontation with Iran, because he is such a revered figure in Iran."

"His fingerprints are all over clandestine and foreign policy operations of Iran throughout the region, from supporting Bashar Al-Assad in his fighting against rebels and ISIS in Syria, to supporting Hezbollah in Lebanon to Hamas in the Gaza Strip to the Houthi rebels in Yemen. And perhaps in this case, most importantly, his support and direction of Shiite militia groups, Iraqi Shiite milita groups, operating in Iraq that conducted an attack killing an American contractor that elicited an American airstrike," McCausland said.

McCausland says "revenge" from Iran could look like anything from terror groups striking Israel or a cyber attack against the United States.

"They have a lot of leverage they could pull, because Iraq will respond asymmetrically as opposed to a conventional attack, if you will, of Iranian forces directly against U.S. forces, which they know would be to their detriment," McCausland said.

"We could see a response, certainly, by Hezbollah against Israel. We could see response by Hamas against Israel. We could certainly see a response by the Shiite milita groups who lost their leader as well in this rocket attack by the United States at the Baghdad airport. A massive attack against the U.S. embassy or attacks against U.S. personnel in Iraq or, of course, an attack at sea because of our naval operations in the Persian gulf at the particular moment."

McCausland says a cyber attack against the U.S. is another possibility.

Former vice president and current Democratic presidential candidate Joe Biden released a statement, saying Soleimani deserved to be brought to justice, but "President Trump just tossed a stick of dynamite into a tinderbox." Biden said Trump owes the American people an explanation of the strategy to keep troops and U.S. personnel safe.

"We could be on the brink of a major conflict across the Middle East. I hope the administration has thought through the second-and-third-order consequences of the path they have chosen," he added.

New Jersey senator and Democrat running for president Cory Booker says Soleimani has American blood on his hands, but he's concerned about what's next and what went into the Trump administration's decision making process.

"We have a president who has no strategic plan when it comes to Iran and has only made that region less stable and less safe," Booker said on Twitter. "And so we still need a lot of questions that need to be answered with this use of military force, what the consequences could be and what the appropriate consultations or involvement of Congress was."

U.S. Sen. Pat Toomey, a Republican from Pennsylvania, said of Soleimani, "The world is a better place now that he is dead. Every American should be grateful to our armed forces who carried out this strike with incredible skill and precision. The Trump administration was right to restore deterrence against Iran."

Democratic U.S. Sen. Bob Casey agreed the world is “safer with him gone,” but he said the Trump administration “must provide a full briefing to Congress” regarding intelligence used, the legal basis for the strike, the nature of the threat, and preparations made by the administration.

“I have grave concerns that President Trump and his Administration have not provided the American people with a comprehensive strategy on Iran,” he said. “This and other recent actions by the Administration have been taken without a Congressionally-approved Authorization for Use of Military Force.”

U.S. Rep. Andy Kim of New Jersey agreed as well, adding that the “potential for severe retaliation from Iran and Iranian-backed forces is very real, and decisions made during the coming hours and days will determine whether we see the threat of a greater regional war in the Middle East realized."

Kim, who served in Afghanistan and worked as director of Iraq in Obama’s National Security Council, is a member of the House Armed Services Committee.

Democratic U.S. Sen. Bob Menendez for New Jersey spoke on MSNBC Friday, saying the Trump administration has to explain what brought us to this moment — and what comes next.

Republican U.S. Rep. Brian Fitzpatrick of Pennsylvania added, “Soleimani was imminently plotting even more attacks on American servicemen and servicewomen, and therefore the air strike was needed to protect our American soldiers, diplomats, and civilians serving in critical missions in the region. Iran’s attacks on the U.S. Embassy in Baghdad, their mounting aggression against the United States in the region, and their direct and imminent threats to Americans serving in critical missions abroad cannot be ignored.”

Former N.J. Gov. Chris Christie, an ally of Trump, praised the move. Sen. Lindsay Graham said in a tweet, "To the Iranian government: if you want more, you will get more."

House Speaker Nancy Pelosi, reacted with a different tone, saying Congress needs to be briefed and "America and the world cannot afford to have tensions escalate to the point of no return."

Reaction from Trump: He tweeted, "Iran never won a war, but never lost a negotiation!"

....of PROTESTERS killed in Iran itself. While Iran will never be able to properly admit it, Soleimani was both hated and feared within the country. They are not nearly as saddened as the leaders will let the outside world believe. He should have been taken out many years ago!

The killing promises to strain relations with Iraq's government, which is closely allied with both Washington and Tehran. Prime Minister Adel Abdul-Mahdi condemned the strike as an "aggression against Iraq" and a "blatant attack on the nation's dignity."

He also called for an emergency session of parliament to take "necessary and appropriate measures to protect Iraq's dignity, security and sovereignty" on Saturday, when funerals will be held in Baghdad for al-Muhandis, the militia commander, and the other slain Iraqis.

Russia condemned the killing, and fellow Security Council member China said it was "highly concerned." Britain's Foreign Secretary Dominic Raab acknowledged the "aggressive threat" posed by the Quds force but urged restraint, saying "further conflict is in none of our interests."

Iraq has been gripped by massive anti-government protests since October, partly against Iran's influence over the country. But at least one protester, who asked not to be named for security concerns, said they "do not celebrate" the killing of Soleimani.

"America and Iran should solve their problems outside Iraq," he said. "We do not want them to solve it inside Iraq, because this will not serve our cause."

The Syrian government, which has received key support from Iran throughout the civil war, also condemned the strike, saying it could lead to a "dangerous escalation" in the region.

In the Gaza Strip, the ruling Hamas militant group offered its "sincerest condolences" to Iran, saying Soleimani had "played a major and critical role in supporting Palestinian resistance at all levels."

There was no immediate reaction from Israel, which views Iran as its greatest threat. Authorities closed the Mount Hermon ski resort near the borders with Lebanon and Syria as a precaution but didn't announce any other security measures. Prime Minister Benjamin Netanyahu's office said he was cutting short a trip to Greece to return home and follow "ongoing developments."

Yoel Guzansky, an expert on Iran at the Institute for National Strategic Studies, a prestigious Tel Aviv think tank, said the killing restored America's deterrence powers in the Middle East.

"I think the Iranians are shocked now, the Russians, the Chinese, no one would believe Trump would do that," he said, adding that Iran, in the short run, was likely to retaliate against the U.S. or its allies, and possibly against Israel. But he said in the long run, the loss of Soleimani — who had also been on Israel's radar for some time — would weaken Iran's capabilities across the region.

For Iran, the killing represents the loss of a cultural icon who represented national pride and resilience while facing U.S. sanctions. While careful to avoid involving himself in politics, Soleimani's profile rose sharply as the U.S. and Israel blamed him for Iranian proxy attacks abroad.

While Iran's conventional military has suffered under 40 years of American sanctions, the Guard has built up a ballistic missile program. It also can strike asymmetrically in the region through forces like Lebanon's Hezbollah and Yemen's Houthi rebels.

As the head of the Quds, or Jersualem, Force of Iran's paramilitary Revolutionary Guard, Soleimani led all of its expeditionary forces and frequently shuttled between Iraq, Lebanon and Syria. Quds Force members have deployed into Syria's long war to support President Bashar Assad, as well as into Iraq in the wake of the 2003 U.S. invasion that toppled dictator Saddam Hussein, a longtime foe of Tehran.

Soleimani rose to even greater prominence by advising forces fighting the Islamic State group in Iraq and in Syria.

U.S. officials say the Guard under Soleimani taught Iraqi militants how to manufacture and use especially deadly roadside bombs against U.S. troops after the invasion of Iraq. Iran has denied that.

Soleimani's killing follows the New Year's Eve protests orchestrated by Iran-backed militias at the U.S. Embassy in Baghdad, which were not related to the anti-government demonstrations.

The two-day embassy attack, which ended Wednesday, prompted Trump to order about 750 U.S. troops deployed to the Middle East. No one was killed or wounded in the protests, which breached the compound but appeared to be mainly a show of force.

The breach at the embassy followed U.S. airstrikes Sunday that killed 25 fighters of Kataeb Hezbollah, an Iran-backed militia operating in Iraq and Syria. The U.S. military said the strikes were in retaliation for last week's killing of an American contractor in a rocket attack on an Iraqi military base that the U.S. blamed on the militia.

U.S. officials have suggested they are prepared to engage in further retaliatory attacks in Iraq.

The Associated Press contruibuted to this report.