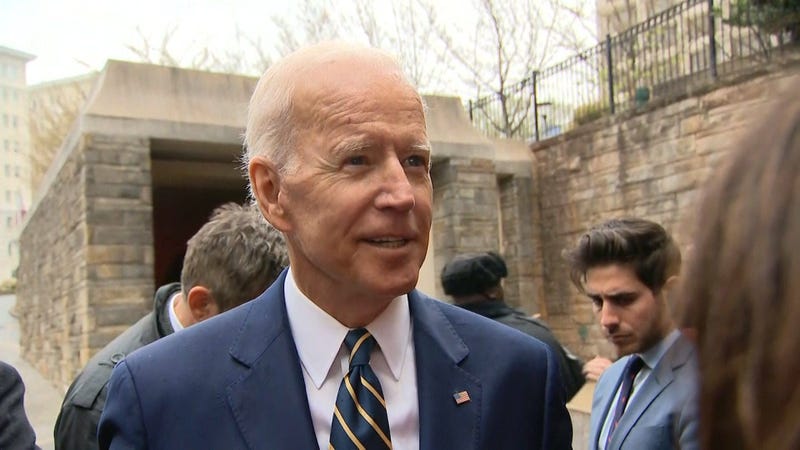 PHILADELPHIA (CNN/KYW Newsradio) — Joe Biden will announce his presidential bid on Thursday with an online video, sources familiar with the plans confirm to CNN, finally answering one of the lingering questions hanging over the 2020 Democratic race.

The former vice president's team has been laying the campaign groundwork for months, with Biden's decision growing less secretive or suspenseful by the day. But now that he has given the green light to his advisers, Biden is facing one of the biggest challenges of his half-century career in politics.

He is scheduled to hold his first campaign event in Pittsburgh on Monday, a source said, and plans to hit the road to the early-voting states of Iowa, South Carolina and New Hampshire in the coming days.

Philadelphia, however, is still in the picture. Although the rumored rally at the Philadelphia Museum of Art steps is canceled, Biden will still be in Philly Thursday.

Over the last five days, Biden's ever-changing locale of plans ranged from Philadelphia to Pittsburgh to Charlottesville, Virginia, which seems to be canceled, too.

Political consultant Neil Oxman said it's not unusual for a campaign in the early phases to struggle with logistics.

"The vice president has a ton of allies and probably got a lot of invitations to, 'Hey, why don't you come here and start your campaign?' " he noted.

Oxman said Biden is a favorite — even before announcing — because he has the biggest lead over the incumbent in most polls.

"When you ask Democrats nationally, 'What's the biggest thing you're looking for in a Democratic candidate for president?' The No. 1 answer is, 'Someone who can beat Donald Trump,' " said Oxman.

Biden's political action committee, American Possibilities, also sent an email to supporters on Tuesday to urge them to sign up for the news.

"We'll cut to the chase," the message said. "There has been a lot of chatter about what Joe Biden plans to do. As one of Joe's top supporters, we want you to be the first to know!"

He is jumping into a race already in progress, likely becoming the 20th Democrat to declare candidacy. He's closely watched the campaign from the sidelines, aides said, following the policy debates and the introduction of rising stars less than half his age.

This will mark his third run for the White House. But everything is different this time around, as he runs as a popular former vice president to Barack Obama. It's a far loftier post than running as a Democratic senator from Delaware, which he unsuccessfully did in the 1988 and 2008 campaigns.

Biden, 76, would be the second-oldest candidate in the race, with the longest record of public service. Only Bernie Sanders, 77, is older.

Biden is hoping to seize command of the highly-fluid contest through major endorsements in hopes of highlighting how the party's most urgent task should be defeating President Donald Trump, Democrats familiar with his plans tell CNN.

Yet before he can face Trump, Biden faces a Democratic Party far different than the last time his name was on a ballot. Progressive issues are front-and-center, rather than foreign policy, which was a hallmark of his nearly four decades in the Senate.

One lingering question for Biden is his ability to fundraise, particularly on the small dollar, grassroots level. Sanders and other candidates have relied on massive online support to churn out impressive fundraising figures.