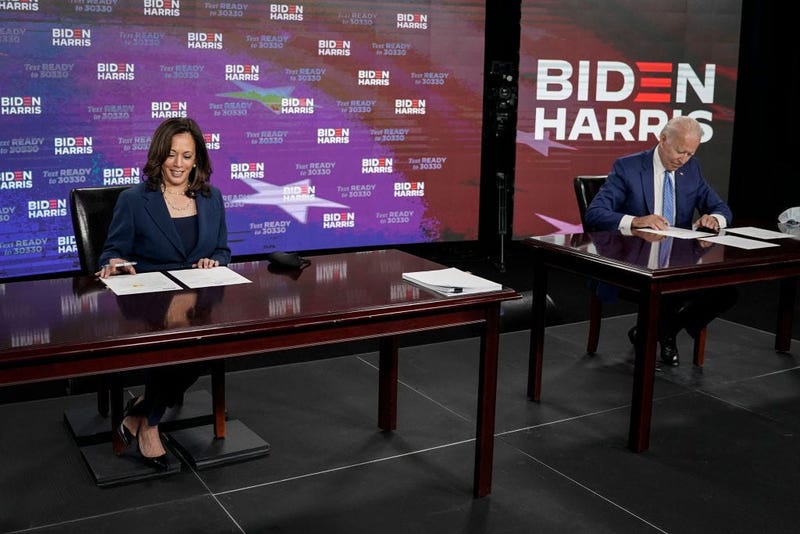 “I’m signing this because I am in this race to win, with that guy right there, and we’re going to get it done,” she said.

Harris’ presence is adding to the force that is making Delaware the center of Democratic politics and a point of focus for the presidential race.

With COVID-19 keeping Biden at home, instead of crisscrossing the country as he did while running with Barack Obama in 2008 and 2012, the campaign stops have mostly been at schools and businesses within an hour’s drive of Wilmington.

Biden is even scheduled to accept the party’s nomination in Wilmington next Thursday, even though the Democratic National Convention is, officially, in Milwaukee.

Biden’s events tend to be small and tightly controlled, so most local residents seem to barely notice. But some take pride in the attention the area is getting.

“I feel good about it. It puts Wilmington and Delaware on the map,” said Joe Sipski, a construction supervisor who was working near Rodney Square.

Skipski also illustrates another factor that pleases many locals: a personal connection to the man who may become one of the most powerful people in the world.

“My grandfather knows him,” Skipski said, explaining that his grandfather was not only a state senator but was a state police captain when Biden’s first wife and daughter were killed in a car accident. “They became very close.”

“Delaware loves him,” Collins said. “We love Joe. Joe's the best thing we got.”

The affection is, famously, mutual.

The story of Biden returning home every night from Washington during his 36 years as a senator, is a central part of his biography. Add to Biden’s down to earth persona that Wilmington is a small city of 70,000.

It has long called itself “a place to be somebody.” As the backdrop for a major party presidential run, that slogan seems truer than ever.