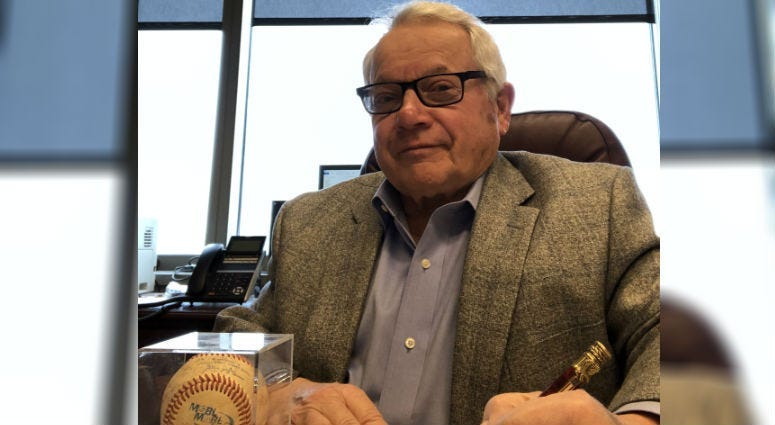 "That was a much more law and order time. When we talk about mass incarceration and the need for criminal justice reform, that was all catching fire at that time," he recalled.

His solution was to make his office better. He expanded recruitment, developed a model training and supervision program and, he said, "We got better, more professional, more persuasive."

That combination of trying to do the right thing in each individual case while having a systemic impact on criminal justice is what has driven Lerner throughout his career, which accounts for the substantial legacy he's leaving in Philadelphia's courts.

"It is an almost unimaginable privilege and honor to be selected to sit in judgment of your fellow citizens and I hope I've been worthy of it," he said in an interview in his office on New Year's Eve — the last day of his judgeship.

Like many lawyers, Lerner began his career clerking for a federal judge, then went on to pro bono work at Ballard Spahr, where he represented the Black Panthers after then-police commissioner Frank Rizzo raided their headquarters, and the Camden 28 anti-war protestors.

At the defender's office, he not only improved the performance of his attorneys, he changed the system in which they were working by bringing test cases to the state Supreme Court to reinforce defendants' rights.

He also got the office involved in collaborative reform work with the courts and the district attorney. He instructed the head of his juvenile division, Darnell Jones, to become active in advocacy organizations for juvenile rights.

"I told Darnell I want us to have a public role in that, not just a courtroom role on a case by case basis," he said.

That raised Jones' profile in the criminal justice community so that he became the first public defender to get a seat on Common Pleas court.

"I could not resist the twin pulls of public service and the criminal justice system," he said.

He received an appointment from then-Gov. Tom Ridge, but to keep the seat, he had to get elected and that meant getting involved in politics.

Ridge appointed him again and this time he was determined to keep the job.

"I developed an appreciation I didn't have for the public service side of ward politics," he said. "Sure, there are a lot of people who are in it for what they can get for themselves or for the power, but there are a lot of people in it at the ward and committee level who were spending an awful lot of their time simply trying to help their constituents, and I was forced to learn more about that and frankly, I think it made me a better judge."

Lerner believes his biggest impact as judge was in the 15 years he spent as calendar judge for homicides and direct file, where juveniles go when being tried as adults.

Among the cases he helped resolve there was the prompt guilty plea and life sentence for Troy Graves, known as the "Center City Rapist," when he was captured in Colorado two years after a series of rapes and the murder of Shannon Schieber.

He also did all of the pre-trial work and guilty pleas that set up the eventual conviction of Dr. Kermit Gosnell. Gosnell is serving a life sentence for the murder of three infants and manslaughter of a patient in his West Philadelphia abortion clinic.

Again, though, it was the combination of individual cases with systemic impact that made it satisfying.

"Because the DA's office had changed a lot, at the end of Lynn Abraham's last term, the people in charge of the homicide unit were really interested in making the system fairer and the people representing the DA's office in the direct file program were of the same mind," he said. "So we were able not only to, I think, do the right thing in the large majority of individual cases, but we were able to affect those systems in a positive way so they were working better, more efficiently and fairer than when I started, and that was everything I'd hoped to achieve as a judge."

Mayor Jim Kenney appointed him deputy managing director for criminal justice reform, but Lerner said he underestimated the difficulty of making changes in a big bureaucracy.

"There's no other way to say this but that I was tremendously disappointed in our failure to continue and expand on a program which had proved in South Philadelphia that it could reduce gun violence substantially," he said, referring to the collapse of a program known as "focused deterrence."

Lerner said he was similarly disheartened by the administration's re-entry work.

"Re-entry," he said, "is really important in reducing recidivism and restoring people to being productive members of the community. And while we had internally a fantastic person doing re-entry work, we were paying a lot more lip service to it as an administration than we were actually moving forward on it. I was kind of banging my head against a wall in that area also."

Lerner returned to the bench in 2018 to play out his final two years of eligibility as a senior judge. The state requires that judges retire for good at the end of the year in which they turn 78.

Lerner, though, is already looking for the next thing, though he doubts it will measure up to life as a judge.

"I have never appreciated anything more than to have been given that honor and privilege," he said.