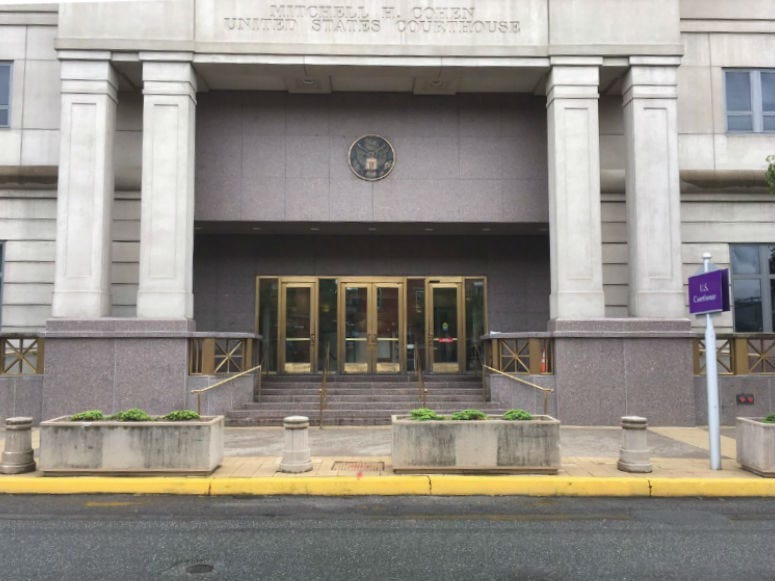 June 10, 2019 06/10/2019 8:53 pm
CAMDEN, N.J. (KYW Newsradio) — There was a snag in the first full day of deliberations in the trial of a suspended Camden County police officer accused of using excessive force during a 2018 arrest, in which surveillance and police body camera video captured the encounter.

Judge Robert Kugler read aloud the jury foreman's first note, "We are deadlocked. People are adamant on both sides. How long do we need to go before there is a mistrial?"

The defense wanted a mistrial declared.

The judge told them, "Stay at it. Don't surrender your beliefs. Listen to the others, re-examine viewpoints based on the evidence and decide for yourself."

Then the judge added, "don't feel rushed or pressured, but take more time."

The jury tells a federal court judge in its 1st full day of deliberations it is deadlocked in the trial of a @CamdenCountyPD officer accused of using excessive force by repeatedly hitting a man in a videotaped arrest in 2018. pic.twitter.com/6Z2NGYNxGP

During the trial, federal prosecutors told jurors Nicholas Romantino abused his power and betrayed his badge by not only punching Edward Minguela in the head 12 times, but also falsifying his incident report to make it look like Minguela was resisting arrest.

His defense lawyer, during his closing arguments, reminded jurors that the officers were responding to a man with a gun, which Minguela fit the description and it all happened in under 20 seconds.

music
Taylor Swift's re-recorded version of 'Love Story' soundtracks Satan and 2020's romance in new ad
sports
Aqib Talib expects more PED suspensions, recalls experience playing on Adderall: 'It was like a video game'
music
AC/DC's Brian Johnson reveals the reason he always wears his iconic cap
music
It might not be 'Sour Candy,' but Lady Gaga is giving us ‘Chromatica’ themed Oreos
news
Man's wife sells his Playstation 5 after he lied and said it was an air purifier
sports
Buster Olney: ‘Rival executive’ expects Kluber to sign with one of Yankees, Red Sox or Mets