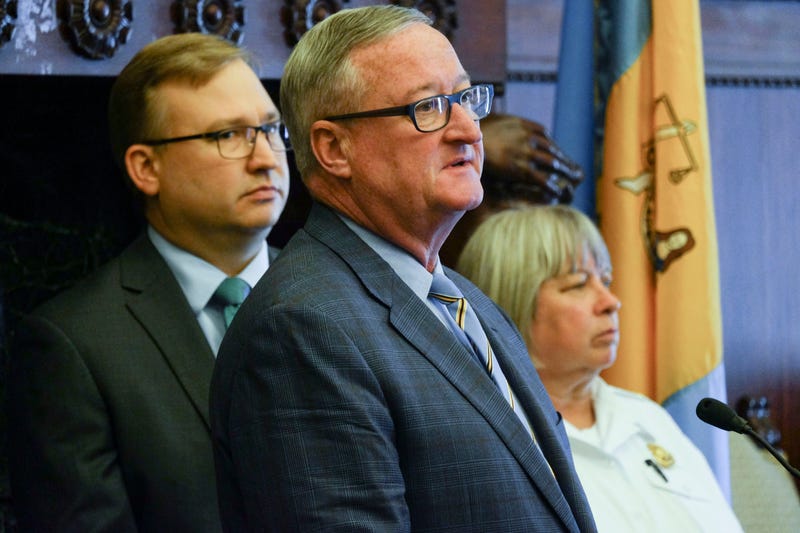 Kenney said he was sad to accept Ross' resignation but agreed that it was the best decision, both for Ross and the police department.

Kenney added that the former commissioner does not make rash decisions. "He's a very strong and focused person."

Kenney said Ross actually resigned Monday, but he asked Ross to sleep on it.

"We revisited again yesterday by phone," Kenney said Wednesday. "He still wanted to resign, and ultimately I accepted his resignation because we both agreed it was the best thing for the department at this particular time."

Kenney began his remarks by recalling what he called Ross' "perfect performance under fire" in last week's shooting of six officers in a seven-hour standoff in Nicetown-Tioga, noting he didn't want that to be forgotten.

After the incident, Kenney said he asked Ross, "Are you OK?" and he responded, "I'm tired."

He said Ross was ready to leave, and he was only partially surprised by the resignation.

Despite everything, the Philadelphia Police Department is in better shape now than it was before Ross became commissioner, the mayor said.

Kenney said he could not and would not answer questions about the federal lawsuit that precipitated Ross' resignation. The suit charges pervasive sexual harassment in the department, including specific incidents against the two officers — both African-American women — who brought the suit.

One of them claims Ross didn't respond because he was angry that she broke off an affair with him.

Kenney did say, however, addressing sexual harassment in the department would be a priority.

"We're going to continue to try to improve and take advice from various organizations and people who deal with this all the time and be the best we can be. I mean, policing's not perfect. Life's not perfect. It's hard, and we're going to try with our best foot forward to make it better."

Acting Commissioner Christine Coulter said she was honored to serve in her new role. She is the first woman ever to lead the department, and she said it's a challenge she wants to take on.

She said the top priority for the department is ending violence in the city. She also said she will take a hard look at the department and make sure it's structurally organized to be the most effective it can be.

Her ultimate goal, she said, is to continue driving down crime in the city as Ross did.

"I would like to change and improve on our relationship with the community, with our partners. They are all things we strive to do every day, and we will work harder every day to accomplish that."

Kenney said the search for a new commissioner will include national, local and internal candidates, and it will include community input. He said diversity will be a major factor in the decision.

"Diversity is a priority in all we do," he added.

Coulter would not confirm if she'll apply for the job of commissioner, but she said, "I would love to continue serving this city."

The mayor said that he didn't conduct a search for Ross when he became commissioner in 2016. Ross was his only choice.

Looking to the future of the city and the department, Kenney said, "We're struggling every day to reduce and limit guns and homicides" — as well as the opioid epidemic.

John McNesby, president of the Fraternal Order of Police, hopes the new commissioner will be someone known to the Philadelphia law enforcement community.

McNesby said Coulter is a good choice for acting commissioner.

"Good fit for the interim, if not the permanent position," he said. "She knows every aspect of the police department. She's been around a while. She moved up through the ranks, and she's a good numbers person, good budget person, so if that's the case, so be it, we'll support her."

McNesby said right now, officers are still in shock over what happened and how quickly it happened.

At the end of the day, he said the FOP had a good working relationship with Ross.

"We didn't always agree and see eye to eye, but ... it wasn't personal, and we had a lot of mutual respect for each other."

The Rally for Justice Coalition, comprising POWER, black clergy and other African-American groups across the city, said they were also shocked by Ross' resignation. Rodney Muhammad, president of the Philadelphia NAACP, spoke for the group, saying they fear they will lose ground gained under the former commissioner.

"We wanted real, honest, community policing," he said. "You can't get that without a commissioner who is willing to work with all sides. And I think we had that with Commissioner Ross."

The coalition has asked that the mayor seriously consider one of several qualified high-ranking African-American women within the department for the position of police commissioner. Weeks ago, the coalition led community pressure to fire officers identified as writing racist Facebook posts.