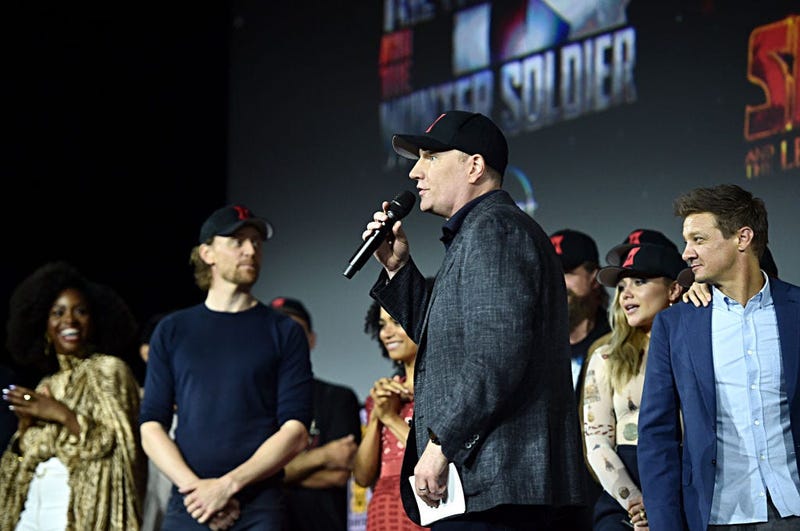 Marvel has consistently followed a well-thought-out game plan in each of its development "Phases" -- introducing its marquee heroes like Iron Man, the Hulk, Captain America and Thor in individual movies before uniting them in "The Avengers" in Phase One; broadening and cross-pollinating with sequels, interconnected storylines and lesser-known, tonally different characters like Ant-Man and the Guardians of the Galaxy in Phase Two; and building an even more cohesive universe with crossovers, a host of even more widely appealing new leads like Black Panther, Captain Marvel, Doctor Strange and a re-integrated Spider-Man while tying up an era of cinematic storytelling in Phase Three.

And once again, Feige says there's a long-game approach in play for Phase Four, which includes the first "Black Widow" solo film, the deep-dive property "Eternals" (with a prestigious creative pedigree thanks to Marvel mainstay Jack Kirby), "Shang-Chi and the Legend of the Ten Rings," upgrading a cult-hit character from the '70s kung fu craze, a revival of the vampiric "Blade" franchise that launched Marvel's movie brand; and the sequels "Doctor Strange in the Multiverse of Madness" (promising to bring a more horrific edge to the MCU) and "Thor: Love and Thunder" (in which Natalie Portman will lift the hammer).

"There always is [a bigger vision], and it sort of only comes into view for others as it all solidifies," the executive told CNN, noting the studio reserves the right to tweak its game plan as creators brainstorm and specific efforts resonate strongly with audiences. "So ask me again at the end of 2021. But I will say, post 'Endgame,' we were always about the new. We were always about doing what we always tried to do in Phase One, Two and Three, which is do a film of character you already know, [like] Black Widow, in a way that you don't expect."

The new efforts are fresh approaches to Marvel's established models. "We wanted to do our big ensemble like we did in Phase Two with 'Guardians,' and that's what 'Eternals is," said Feige. "We want to bring in new characters like Shang-Chi, who's awesome...New versions for Dr. Strange. Thor continuing to surprise and change and evolve."

The film slate -- and Marvel's increasingly epic interconnected continuity -- is also being bolstered by a collection of mini-series that will help launch Disney's forthcoming streaming service Disney +, focusing on established Avengers and their enemies, including "Falcon and The Winter Soldier," WandaVision," "Hawkeye," "Loki" and the alternate reality-exploring "What If..." There are also additional theatrical releases expected to be announced for the fourth phase, including "Guardians of the Galaxy, Vol. 3" and sequels to "Black Panther" and "Captain Marvel."

Of the "mega-event limited series," Feige said "'WandaVision' will be unlike anything we've done before, and I'm excited to talk to people more about it, eventually. And you see Daniel Bruhl coming back to Zemo and having more time to spend with these beloved characters in 'Falcon and Winter Soldier.' Loki returning -- it's an embarrassment of riches, all of it extremely thought out by the team Marvel Studios, to do it in ways that I hope will satisfy fans who are anticipating it, but in a way they are absolutely not expecting it."

Diversity has clearly reverberated deeply with audiences embracing superheroes that look and feel like they do, with Captain Marvel and Black Panther as cases in point. Black Widow, Shang-Chi, Blade and the multiethnic makeup of Eternals is another step toward a more representative MCU, while the recruitment of filmmakers like "Black Widow's" Cate Shortland, "Eternals'" Chloe Zhao and "Shang Chi's" Destin Daniel Cretton constitude strides behind the camera as well.

And then there's that gender-swapping twist expected in "Thor: Love and Thunder": if it follows the much-admired comic book storyline from writer Jason Aaron, Thor's paramour Jane Foster (played by Portman), through a poignant twist of fate, will assume the mantle of thunder goddess when she proves worthy of wielding Thor's hammer.

"We love the story -- it's one of the best comic runs recently," said Feige. "[Director Taika Waitit] would flip through and read that run while he was doing 'Ragnarok.' And I think when he agreed to come back and do another Thor, he was like, 'How do we--?' This is a very big movie that'll be folding in a lot of elements. That is a huge important part of it. He pitched it to us, and we were totally in. We loved it. We'd been in touch with Natalie. She's part of the MCU family and we put she and Taika together. It took one meeting and she agreed to do it."