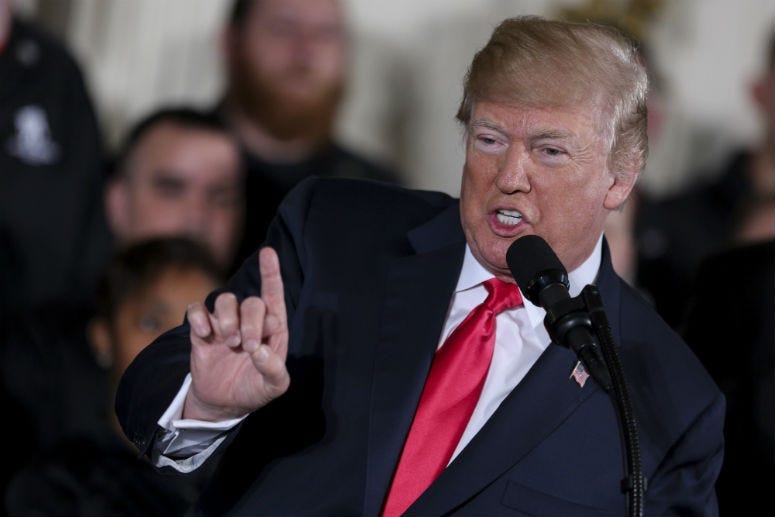 By Lauren Fox, CNN
(CNN) -- House Ways and Means Committee Chairman Richard Neal has issued subpoenas for President Donald Trump's tax returns, the committee told CNN on Friday, an escalation in the fight for the President's personal financial records and the latest step this week in Democrats' fight for information from the Trump administration.

Neal, who has unilateral subpoena power, took the step days after the Treasury Department formally denied Neal's request for six years of the President's personal and business tax returns earlier this week.

While Neal did not need a subpoena to eventually move to court, he issued them on the advice of House counsel whom he consulted with throughout the process.

Unlike other requests for information coming from House Democrats, Neal is relying on a decades-old tax statute -- 6103 -- that says that the House Ways and Means chairman, Senate Finance Committee chairman or chief of staff of the Joint Committee on Taxation can request any individual's tax information in the course of their legislative business. Democrats have argued under that statute they have the ability to request Trump's tax returns even without a subpoena, but internal deliberations got Neal to the point where the advice was that a subpoena could bolster the case in court. The Democrats on Neal's committee have argued that they need access to the President's tax returns in order to understand how the IRS administers the presidential audit program even as Republicans and the Treasury Department have argued it is not a legitimate legislative purpose.

"After consulting with the Justice Department, the Treasury Department has come to the firm conclusion that we have known since day one: this request from House Democrats to weaponize the tax code for purely political reasons is illegitimate and should be treated as such," Rep. Kevin Brady, the top Republican on the House Ways and Means Committee, said in a statement this week.

Neal's move is expected to eventually be followed by action to go to court, a process that could take months or even years.

Neal -- a Massachusetts Democrat who has waited years to hold the gavel of House Ways and Means and is invested in making policy reforms that would cement a legacy beyond the tax fight -- was an unlikely figure to lead the charge for the President's closely-held financial information. While Neal has said from the outset that he planned to request Trump's tax returns, the fight has forced a business-minded and pragmatic Democrat to be a face of opposition to Trump even as Neal has worked hard behind the scenes to foster relationships with the Treasury secretary and the President himself to lay the groundwork for infrastructure negotiations moving forward.

Neal's measured approach has -- at times -- frustrated those on his committee who wished he'd taken a more aggressive stance in his fight for the tax returns. Some on the committee like Rep. Lloyd Doggett, a liberal Democrat from Texas, have argued that if they were in Neal's position, they would hold Mnuchin in contempt of Congress if he refuses to hand over the tax returns, a step that is unlikely to happen with Neal at the helm of the committee. Doggett argued he also would have moved the process forward more quickly.

"I think knowing what we know now and looking back on it, it would have been better to move earlier," Doggett said. "The President has made it clear that he doesn't intend to provide any documents."

Others have argued that Neal's approach has been the right one, saying he has been carefully building a case that could survive the scrutiny of the courts at a time when Democrats may have to bring multiple cases at once to get information from the Trump administration. Democrats are expected to move ahead with litigation to get the full, unredacted Mueller report and may have to legally advance other issues in order to enforce subpoenas from the committees.

Now, the fight for Trump's taxes will largely move out of Neal's hands.

In upcoming days -- if the Treasury Department or IRS defy the subpoenas -- the House counsel would ask the speaker of the House to authorize court action. Then, the speaker has the options of either having a full House vote or what is more likely, ask the Bipartisan Legal Advisory Group to approve legal action. The group is made up of three Democrats and two Republicans meaning that Democrats can authorize any legal action they want through a vote of the group.

Unlike subpoena fights between the executive branch and legislative branch that have gone to court over the last decade or so, fights over IRS statute 6103 are untested in the courts. The law, which says the House Ways and Means chairman, Senate Finance chairman and the chief of staff of the Joint Committee on Taxation all can ask for information on individual taxpayers and the Treasury secretary "shall furnish" it, have never been challenged before.

This story has been updated with additional developments Friday.