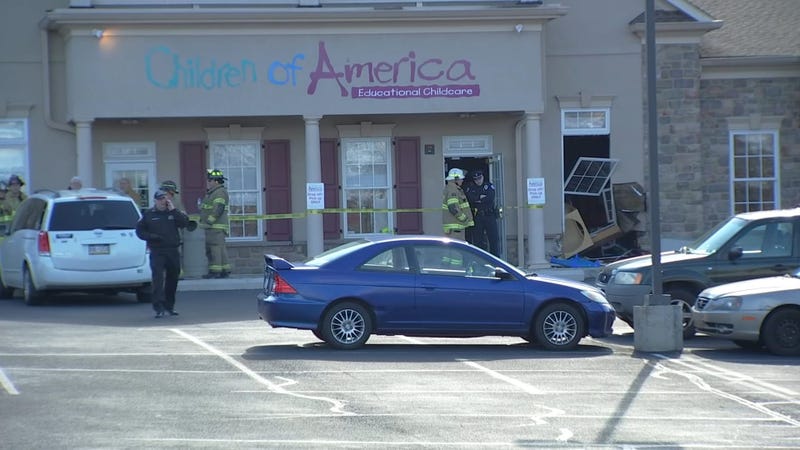 SOUTHAMPTON, Pa. (KYW Newsradio) — Upper Southampton police say four young children have been taken to area hospitals after a car crashed into a day care center, and one is in serious condition.

Bucks County First Assistant District Attorney Gregg Shore said 17 toddlers — around 3 and 4 years old — were napping in the front room of the Children of America day care, located in a shopping center on Knowles Avenue, when a vehicle plowed through the building around 1:30 p.m.

He said a woman was making a delivery when she suddenly lost control of her car. It ended up about 50 feet inside the day care.

One of the four children was taken to the Children’s Hospital of Philadelphia with serious injuries.

The driver was treated and released from the hospital, and she is cooperating with police.

In all, about 75 children were in the building, and they have all been accounted for.

Parents rushed to the scene after they were notified by email and phone.

“They're OK. I'm the one who's scared,” said parent Amanda Santiago, who rushed to pick up her kids Thursday afternoon. She told NBC10 that the room the car crashed into is always occupied with older children.

“That room is always filled. I've never seen that room empty,” she said. “Some of the rooms get empty sometimes. They're not telling us that, of course, but I won't be surprised if there are kids who were hurt or just traumatized.”

An investigation is underway.