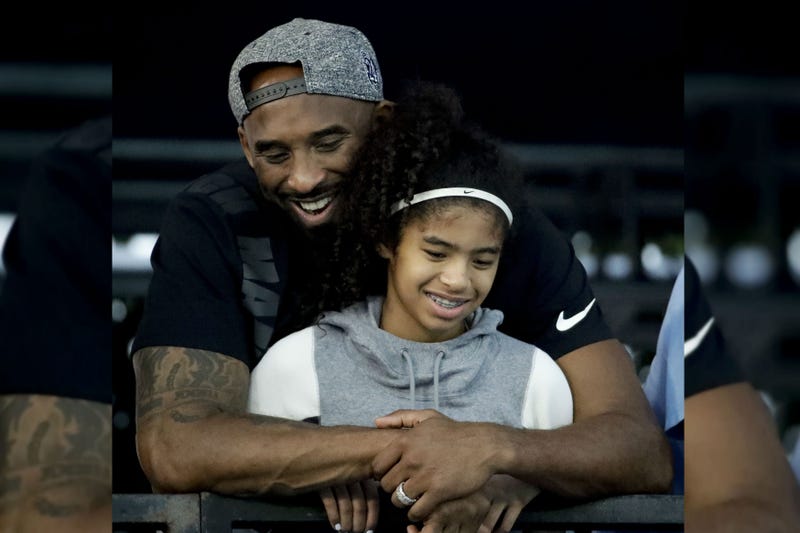 Continuing coverage: For the very latest, follow all the updates live from RADIO.COM.

PHILADELPHIA (KYW Newsradio) — NBA legend and Philadelphia native Kobe Bryant, his 13-year-old daughter and seven others were killed in a helicopter crash on a remote, steep hillside in Southern California on Sunday.

Authorities said that nine people died, with no survivors, after earlier putting the death toll at five.

The chopper went down in Calabasas, about 30 miles northwest of downtown Los Angeles. Authorities said that nine people died, with no survivors, after earlier putting the death toll at five. Bryant, an all-time basketball great who spent his entire 20-year career with the Los Angeles Lakers, was among the victims, a person familiar with the situation told The Associated Press.

A different person familiar with the case confirmed that Bryant’s 13-year-old daughter Gianna also was killed.

Los Angeles County Sheriff Alex Villanueva would not confirm the identities of the victims Sunday afternoon pending official word from the coroner.

Man I don’t even know where to start---- I started playing ball because of KOBE after watching the 2010 finals. I had never watched ball before that and that finals was the turning point of my life. I WANTED TO BE LIKE KOBE. I’m so FREAKING SAD right now!!!!RIP LEGEND

Kobe Bryant was a giant who inspired, amazed, and thrilled people everywhere with his incomparable skill on the court — and awed us with his intellect and humility as a father, husband, creative genius, and ambassador for the game he loved. pic.twitter.com/hkb0lbRwie

Reports are that basketball great Kobe Bryant and three others have been killed in a helicopter crash in California. That is terrible news!

Bryant retired in 2016 as the third-leading scorer in NBA history, finishing two decades with the Lakers as a prolific scorer with a sublime all-around game and a relentless competitive ethic. He held that spot in the league scoring ranks until Saturday night, when the Lakers’ LeBron James passed him for third place during a game in Philadelphia, his home town.

Continuing to move the game forward @KingJames. Much respect my brother ???? #33644

Bryant had one of the greatest careers in recent NBA history. It all began at Lower Merion High School.

He played on the varsity basketball team as a freshman as the team went 4-20. Over the rest of his time at Lower Merion, Bryant's squad went 77-13.

Bryant brought national attention to the quiet suburban high school he attended, and that community is feeling the loss deeply.

He entered the NBA draft straight out of high school in 1996 — one of the first players to do so — after a childhood spent partly in Italy, where his father, former NBA player Joe “Jellybean” Bryant, played professionally. So, while other players were introduced by their college, Bryant made the Lower Merion High School Aces famous.

"Our school community will always be grateful for his ongoing generosity to his alma mater," said school district spokeswoman Amy Buckman in a statement she read outside the school’s Bryant Gymnasium on Sunday, explaining that coach Gregg Downer was too overwhelmed to speak.

"Mr. Downer said that he is completely shocked and devastated, adding that Aces nation has lost its heartbeat," she continued.

Students, alumni and fans gathered outside the gym, too, creating a spontaneous memorial of flowers, stuffed animals and basketballs. Josh Cheadle, a Penn student from Newport Beach was making a long planned pilgrimage.

"I just grew up. Kobe was my guy," Cheadle said. "A big Lakers fan from Southern California. I mean, I always wanted to come to Lower Merion High School. I just wish it had been for a better reason."

He became one of the game’s most popular players as the face of the 16-time NBA champion Lakers franchise. He was the league MVP in 2008 and a two-time NBA scoring champion, and he earned 12 selections to the NBA’s All-Defensive teams.

Bryant kept his roots in Philadelphia and even sent a message to the Eagles the week before they won the Super Bowl.

Here are some of the many highlights of Kobe Bryant’s career.

'We heard some sputtering, and then a boom'

Colin Storm was in his living room in Calabasas when he heard “what sounded like a low-flying airplane or helicopter.”

“It was very foggy so we couldn’t see anything,” he said. “But then we heard some sputtering, and then a boom.”

The fog then cleared a bit and Storm could see smoke rising from the hillside in front of his home.

Juan Bonilla of Calabasas said he was working on his roof Sunday morning when he heard a helicopter flying low nearby. He said he thought it was a sheriff’s helicopter on a training mission. He heard nothing amiss with the engine or rotors and said he did not see any mechanical issue with the chopper. It was foggy Sunday morning, but he said visibility didn’t seem to be low at the time of the crash.

Los Angeles County Fire Chief Daryl Osby said firefighters hiked in with medical equipment and hoses, and medical personnel rappelled to the site from a helicopter, but found no survivors.

Firefighters worked to douse flames that spread through about a quarter acre of dry brush, Osby said.

The National Transportation Safety Board sent a “go team” of investigators to the site. The NTSB typically issues a preliminary report within about 10 days that will give a rough summary of what investigators have learned. A ruling on the cause can take a year or more.

“They will look at man, machine and environment,” said Gary C. Robb, an aviation attorney in Kansas City who wrote a textbook on helicopter-crash litigation.

Investigators will also consider what role might have been played by weather, terrain, radio towers or bird strikes, he said.

Robb said he has handled many cases involving Sikorsky S-76 crashes and regards the machine as having a good reputation.

“It is generally regarded as a good helicopter with a good safety record,” he said, “but parts fail, parts break. Anything can happen.”

KYW Newsradio's Ed Benkin, Pat Loeb and Molly Daly, and the Associated Press contributed to this report. Stay with KYW Newsradio for more on this developing story.
CORRECTION: In a previous version of this story, Gregg Downer's name was misspelled.