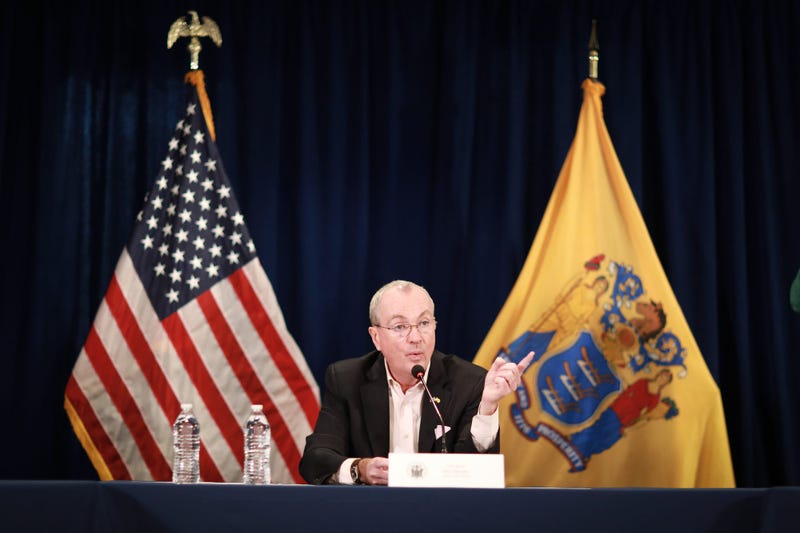 PHILADELPHIA (KYW Newsradio) — New Jersey Gov. Phil Murphy joined KYW Newsradio for a live conversation to tell listeners where the state is in the fight against coronavirus.

Q: Where does New Jersey stand right now in the fight against coronavirus?

A: As of yesterday — and we'll update this number midday — but we have 427 positive cases, five fatalities. This is hitting harder in the northeast part of our state — hitting hardest there, I should say.

So for your listeners in Jersey, we've got fewer cases in the south. We've got 10 in Burlington County, eight in Camden County, three in Atlantic County, a couple in Gloucester, none so far yet — although this is subject to today's numbers — in Cape May, Cumberland or Salem counties.

I also want to say that you can't do this on your own. We're taking incredibly aggressive action ... with our neighboring states, including New York, Connecticut, up north and, importantly, with Pennsylvania, Gov. Wolf. But we're in the fight, and this is going to get worse before it gets better, without question.

Q: Speaking of it getting worse, the health commissioner yesterday talked about maybe re-opening Underwood Memorial Hospital in Woodbury, to provide another 300 beds there. Can that be done fast enough?

Secondly, opening full hospitals that have been shut. Underwood is the most attractive of that. The answer is yes, it can be done. My guess is, it's a matter of weeks.

Thirdly, looking at pop-up options, where you listerally set up in a parking lot — maybe not for COVID patients, but for other patients — and then sort of reconfigure dormitories that are empty that could maybe house low-level symptomatic folks.

We're doing everything we can. ... This is an and/both strategy. So, on the one hand, we're trying to crush the curve of infection, and that's all of the social distancing steps we're taking, closing schools, casinos, restricting travel between 8 p.m. and 5 a.m. everyday, etc. That's on the one hand, but on the other hand, trying to build more capacity into the health care system and get more equipment.

Q: Any word on opening a testing facility for South Jersey?

A: I spoke to one of the senior legislators about it yesterday. I don't have a specific place or date, but that is something we are very focused on. We're opening up in Bergen County in the north tomorrow. That's the county that's been hit the hardest. I think we have 114 cases in Bergen alone, as of yesterday.

We'll probably do one in a few days in Central, and I want one set up in South Jersey as soon as we can. We'll get you the information as soon as we've got it.

Q: The mayor of Wildwood Crest is calling for the bridges into the Wildwoods to be closed to keep tourists and second homeowners out. What do you think of that idea?

A: Hadn't heard about it. Restricting nonessential travel is something we support, so without knowing exactly — I know those bridges, but I'm not sure exactly the implications of that. Obviously, you've got to keep essential traffic available, you know: police, fire, people who are going to work in a health care facility; food supply, drug supply, etc. Restricting travel as a general matter is something we endorse, and if we have to get more strict about that, we will.

I think that's the big plea to those who are listening. There are still too people who think this is abstract, that it doesn't impact them, particularly among our young folks, and I would just say to them, (a) it might impact you, and (b) even if it doesn't, you could pass the virus on. So we're deadly serious about social distancing. Keep six feet apart, wash your hands with soap and water, basically adhere to what we've laid out, and if we need to, we'll get even more strict.

Q: One of our guys coming in today found out that there's a new rule in Camden County that there's no more self-service coffee in convenience stores. Is this something that might be considered statewide?

A: Again, I have not heard that. You know, a lot of the counties and local municipalities are taking steps and we know everyone's heart's in the right place. So we can't argue with that. We also just have to assess these at the state level.

At the end of the day, the buck stops with me, so I've got to make sure that what folks are doing makes sense. But I think restricting interaction is generally going to be the name of the game, so if it helps to do that, restricting our interaction is the key piece here.

Social distancing is the reason why we're going to be able to get through this without tanking our health care system, and saving lives in the process.

Q: What kind of help are you getting from the federal government?

So the federal government asks are fairly straightforward. No. 1, we need personal protective equipment. I've spoken to the president. I speak regularly to the vice president. We've got a big ask in. We were one of the first states to put that ask in. This is the N95s, the masks, etc. We've gotten a fraction of our asks. We need a lot more.

Secondly, boots on the ground. That's gone faster, and that's a good thing. So FEMA Region 2 is helping us set up our drive-thru testing, I mentioned, tomorrow in Bergen County — the first of many, we hope. The Army Corps is coming in today to sit with me and my team to look at hospital bed capacity, so that's a good thing.

The third gorilla ask — and this is not just from New Jersey, this'll be from the region, and probably every American state — the impact on the economy from what we're doing, as it relates to social distancing, is nothing short of devastating. So we're gonna need — if we're gonna be in there helping the individuals and the small businesses, as we are day in and day out, we're gonna need an enormous amount of federal support.

I started doing the math last night. I think the region of Pennsylvania, New Jersey, New York, Connecticut alone, is going to need $100 billion of federal block grants to allow us to continue to serve the folks who have been impacted the most by this.​