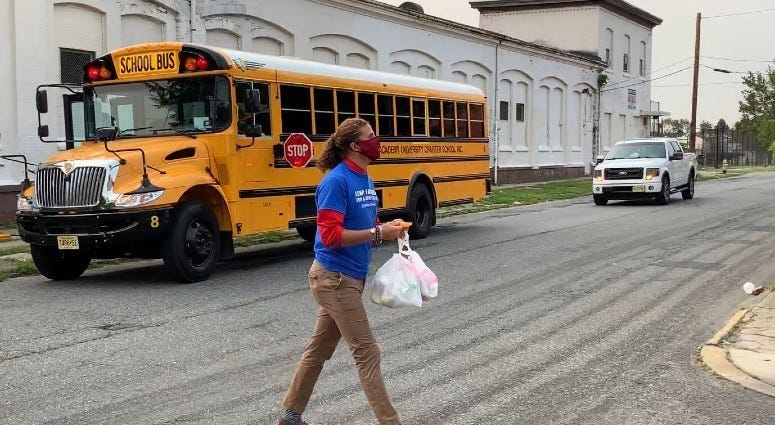 PHILADELPHIA (KYW Newsradio) — A South Jersey school has found a new way to make sure its students are well-fed during remote learning by busing meals to kids.

Every weekday morning, Waleska Cruz waits for the school bus to arrive at her Camden home. A man gets off the bus and hands her two bags containing milk, apples, hamburgers and other goodies for her daughters, who are learning from home during the pandemic.

Stephanie Weaver-Rogers, LEAP Academy University Charter School chief operations officer, said school meals were available for pickup after classes began in late August, but many parents weren’t taking advantage. So, she said, the school has been delivering meals to students since Sept. 2.

“We had the buses sitting and since we weren’t using them to transport kids to school, we decided that we would use it to transport the food to the kids,” she told KYW Newsradio.

Weaver-Rogers said LEAP Academy is delivering more than 1,400 meals a day to students throughout Camden and Pennsauken.

“Other schools are providing food distribution in different ways,” she said. “We just found that because of our location and our families being so spread out, it was difficult for them to get in to pick up the meals and also have the kids online on time for instruction.”

Cruz said she used to go to the school to pick up the meals for her daughters, fourth grader Diamond, and Crystal, who’s in kindergarten.

But it was a challenge to return home with breakfast in time for classes at 8 am.

“It’s a little bit complicated,” she said. “Right now he brings it to the home. It’s more easy, because I have the kids and the meal is in the door.”

In addition to keeping kids nourished, the program keeps nearly 30 bus drivers and food service workers on the job.

LEAP Academy is scheduled to resume in-person classes on Oct. 5, but Weaver-Rogers said the meal buses will keep rolling for students who opt to continue remote learning.​

news
Supermarket selling leaves off the ground as an 'autumn bouquet'
sports
Nick Foles: It was Frank Reich 'who figured me out as a player'
sports
Jimmy Rollins called an MLB playoff game wearing Gucci flip flops
sports
Jimmy Rollins 'cried like a baby' when Bobby Abreu was traded to Yankees