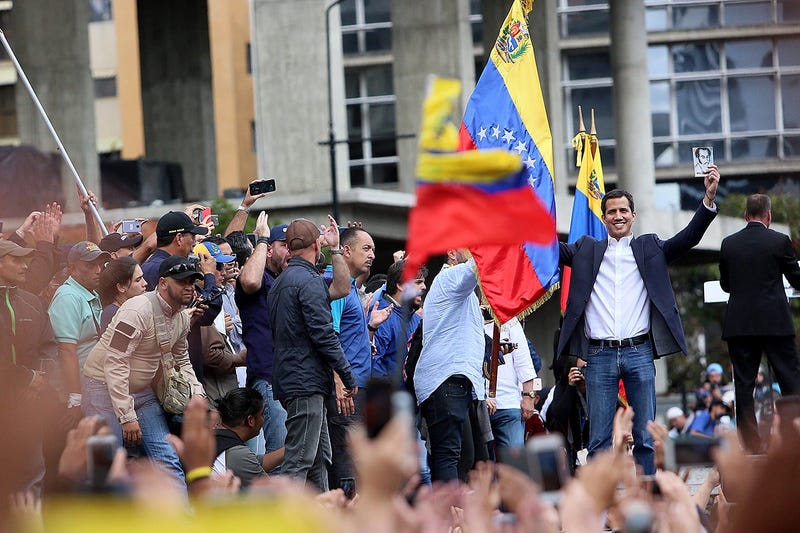 January 23, 2019 01/23/2019 9:05 pm
By Ray Sanchez and Nicole Chavez
(CNN) — Venezuelan President Nicolas Maduro on Wednesday gave U.S. diplomats 72 hours to leave the country in response to the head of the National Assembly declaring himself acting president amid massive anti-government protests.

Hours after President Donald Trump officially recognized opposition leader Juan Guaido as the country's legitimate president, a defiant Maduro appeared before throngs of supporters to accuse the United States of backing an attempted coup. He announced that he was cutting political and diplomatic ties with Washington.

"We cannot accept the invasive policies of the empire, the United States, the policies of Donald Trump," he said to cheers from the crowd. "Venezuela is a land of liberators."

"We will not surrender," Maduro added.

The announcement came as thousands of Guaido supporters took to the streets in a revitalized effort against Maduro.

Trump vowed in a statement to use "the full weight of United States economic and diplomatic power to press for the restoration of Venezuelan democracy."

The citizens of Venezuela have suffered for too long at the hands of the illegitimate Maduro regime. Today, I have officially recognized the President of the Venezuelan National Assembly, Juan Guaido, as the Interim President of Venezuela. https://t.co/WItWPiG9jK

Maduro addressed supporters from the balcony of the Miraflores presidential palace later in the day, recounting a long history of American intervention in his country's political affairs and saying that only Venezuelans can elect and remove their government leaders.

"We will not surrender," he said, accusing the United States of carrying out a coup in Venezuela.

The head of the country's highest court, Juan Jose Mendoza, urged the attorney general to "act immediately" in the face of any constitutional violations.

Sporadic clashes erupted after Guaido's announcement, with news footage showing National Guard members launching tear gas canisters at anti-government demonstrators near one of the main highways in the capital.

Prior to his dramatic swearing-in before throngs of supporters in the capital Caracas, Guaido, 35, said the day marked the beginning of an unstoppable movement to restore independence and democracy to the troubled nation. "We know this will have consequences," Guaido said.

Calling Maduro a dictator and a tyrant, Guaido called for new elections.

"Raise your right hand, today, Jan. 23, 2019, in my condition as president of the National Assembly, invoking the articles of the Constitution — before almighty God," said Guaido, surrounded by supporters raising their hands in solidarity.

"I swear to formally assume the power of the national executive office as the president of Venezuela."

After the swearing in, Guaido and supporters sang the national anthem.

The anti-Maduro marches began at various points throughout the capital, with news footage showing Venezuelan National Guard members tear-gassing protesters near the El Paraiso neighborhood. Others marches were held throughout the country. The opposition has called for new elections, accusing Maduro's government of abusing power.

"The young people of my country need freedom," Grace Chacon said at a march in Caracas.

Maduro and his supporters held a parallel rally outside Miraflores

"We are here to reject any type of attempt to interfere with our nation," said Betulio Reyes, a pro-Maduro rally participant. "We are independent and sovereign and can decide on the fate of our own lives."

Jose Luis Gutierrez of Caracas vowed to "defend my country and my president against any foreign insurgency."

The protests took place on a highly symbolic date for Venezuelans. Wednesday marks the 61st anniversary of a civilian and military uprising that overthrew former dictator Gen. Marcos Perez Jimenez.

Some signs of unrest emerged earlier this week in Caracas. A small team of soldiers, claiming to be members of the armed forces, attempted an uprising against Maduro and triggered violent street protests.

The protests come weeks after Maduro began his second term in power with the nation facing a deep economic crisis and dozens of other countries disputing his legitimacy.

Trump has mulled recognizing Guaido as president as top officials in the U.S. administration have ratcheted up their public statements against Maduro.

Depending on Maduro's response to the protests, Trump is prepared to take a range of actions in retaliation, including possible oil sanctions, two sources familiar with White House deliberations said.

"We are with you. We stand with you and we will stay with you until democracy is restored and you reclaim your birthright of libertad (freedom)," Pence said in a video posted on Twitter.

As the good people of Venezuela make your voices heard tomorrow, on behalf of the American people, we say: estamos con ustedes. We are with you. We stand with you, and we will stay with you until Democracy is restored and you reclaim your birthright of Libertad. pic.twitter.com/ThzIAqBoRn

Pence said the United States maintains that Maduro "is a dictator with no legitimate claim to power" and reiterated the administration's policy in support of Guaido.

In response to Pence, Maduro called for a "total, absolute revision" of Venezuela's diplomatic relations with the United States and said his government will take "political, diplomatic and defense decisions" to defend the country's democracy.

"Never before has an official of the highest level come out in the name of his government, he spoke on behalf of the president of the United States, to say that in Venezuela, the opposition must overthrow the government," Maduro said in a televised message.

Other Venezuelan officials accused Pence of being behind the purported military uprising this week in Caracas.

Wednesday's protests were expected to be the largest demonstration since 2017. Thousands clashed with security forces for months at that time, accusing Maduro of imposing a dictatorship. More than 120 people were killed in protest-linked incidents during that unrest.

On Tuesday, the National Assembly advanced efforts for an amnesty policy for civilians and military officials who would rise up against Maduro's government.

A day earlier, the Venezuelan Supreme Court ruled the National Assembly is illegitimate, and that no law discussed in the legislative body holds any legal value.

Maduro has continued the social welfare programs and price control policies of Hugo Chavez, who steered the country toward socialism before dying in 2013. Through nearly a decade of mismanagement, Venezuela has squandered its oil wealth, leaving its economy in tatters and Latin America reeling from a mass exodus of migrants in search of food and medicine.

The United Nations estimates as many as 3 million Venezuelans have fled since 2014.