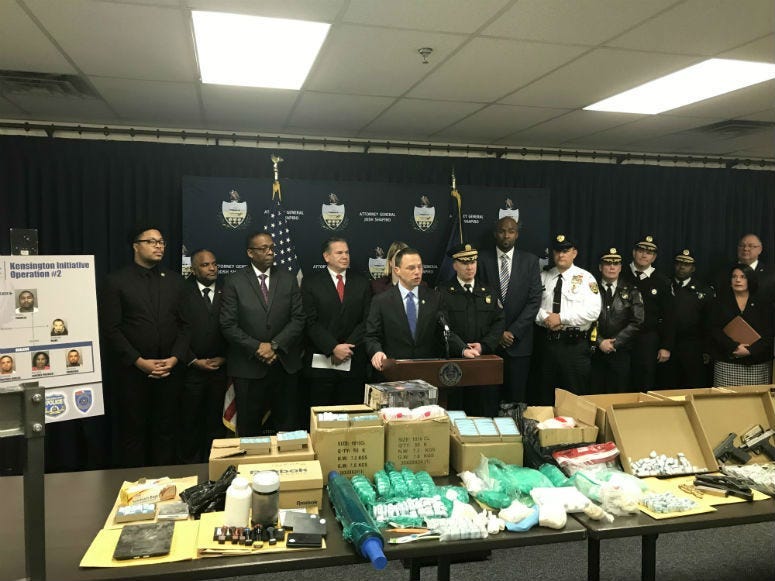 February 14, 2019 02/14/2019 11:18 pm
PHILADELPHIA (KYW Newsradio) — A major drug bust in the Kensington section of Philadelphia shuts down an operation that authorities say had a stronghold on the neighborhood for years and consistently put heroin and fentanyl back into the streets.

On Thursday morning, authorities arrested 11 alleged drug dealers who, they say, ran an organization that moved more than $7.5 million worth of drugs a year.

"We didn't trip over these drug dealers. We targeted these drug dealers, and now this network that peddled these poisons is shutdown in the City of Philadelphia," said Pennsylvania Attorney General Josh Shapiro.

Shapiro says during the bust, they raided more than two dozen homes and vehicles, where they found guns, money, a kilo press and a machine used to package drugs.

"At least 17 children were found living in the homes when our agents and others arrived, where these drugs were being sold. One home on Argile Street had no heat, and was described to me as being in truly hellacious condition," Shapiro said.

He says the takedown, which was a joint partnership between federal, state and local law enforcement, got 170,000 doses of heroin and fentanyl off the streets.

"As a result of this work that happened here, moms can let their kids go out and play again. You see this organization controlled city blocks, they put these poisons on other blocks," Shapiro said.

This bust is part two of the Kensington Initiative Operation, and Shapiro says make no mistake, they're going to keep it going.

"I will also tell you, we're far from done," Shapiro said.