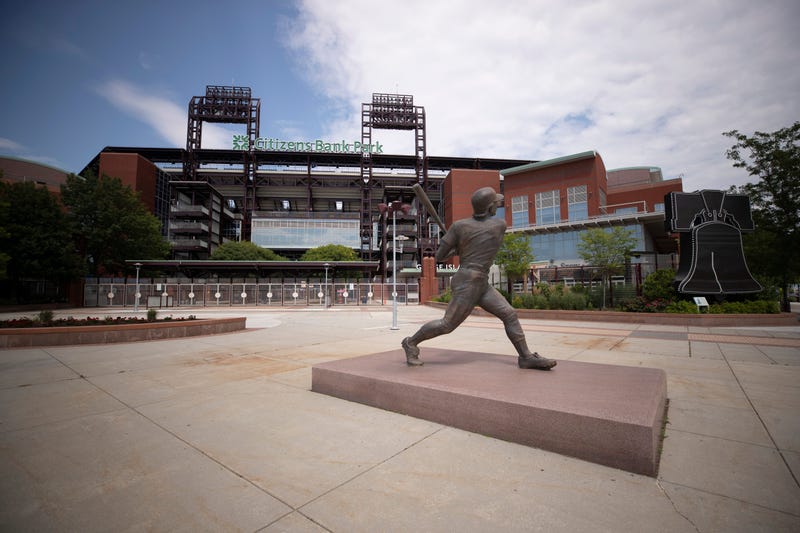 PHILADELPHIA (KYW Newsradio) — If you blinked, you missed the brief amount of Phillies baseball that’s happened so far. And you’ll have to wait once again — hopefully, only briefly — before the Phillies play again.

After the Phillies' first three games of the season, news of a coronavirus outbreak on the Miami Marlins sent both teams into a period of testing and waiting.

On Wednesday afternoon, it was confirmed that one Phillies employee, who works in the visiting clubhouse, tested positive for the coronavirus, the Associated Press reported. However, general manager Matt Klentak said all Phillies players and on-field staff tested negative for a second straight day.

Major League Baseball on Tuesday afternoon postponed the entirety of the Phillies home-and-home four-game series with the New York Yankees “out of an abundance of caution.” The Phillies won't play again until after Saturday — if all goes well.

Marlins games have been postponed through Sunday.

“Given the current circumstances, MLB believes that it is most prudent to allow the Marlins time to focus on providing care for their players and planning their Baseball Operations for a resumption early next week,” the league’s statement said, in part.

If all goes well with the Phillies' coronavirus testing, their next game is scheduled for Saturday as visitors for a double-header with the Blue Jays — in South Philadelphia. The Jays were supposed to be home, but they’re not allowed to play in Toronto. And their alternative location — Triple-A Buffalo — isn’t ready yet to host a big league game.

For the second consecutive day, all of the Philadelphia Phillies coronavirus tests for players and staff members have come back negative, a source familiar with the situation tells ESPN.

The Marlins' next scheduled game after Sunday is Tuesday, Aug. 4, against the — guess who — the Phillies … in Miami. While that’s what’s on the schedule, the 2020 season has proven that nothing is guaranteed.

“Additional rescheduling during the week of August 3rd will be announced later this week,” MLB’s statement said.

Before Marlins-Nationals in Miami was postponed this weekend, rumors were going around that Washington didn’t want to play. Nats manager Davey Martinez shared that most of their guys were against playing those games as scheduled, but not because of the Marlins. They were concerned about traveling to the city of Miami.

New York Gov. Andrew Cuomo said Tuesday that any game that needs to be played in a different location than originally scheduled can come to his state.

“If you’re having problems playing in other states, come play here,” Cuomo said. “New York state could host any Major League Baseball game that any teams want to play, and they could play those games in our stadiums.”

Whether MLB takes up Cuomo’s offer remains to be seen.

Girardi: ‘We have to be really smart about this’

Putting aside the absolute roller coaster ride this 2020 baseball season has become, safety is without question of the utmost importance. The Marlins outbreak is well into double digits — reportedly as many as 17 members of their organization.

“My fear always is if there’s one person that has it, there’s probably more. And I don’t know if any of us thought there would be — I think they’re up to 17 cases now, 15 players, and it’s devastating for the Marlins. But there were some anxious moments.”

"If this situation [Sunday against the #Marlins> were to happen again, would you feel comfortable taking the field, as a team?""I don't think so."@Phillies | #Phillies | Joe Girardi pic.twitter.com/I2RJj47FqQ

Girardi said that, as of Tuesday morning’s interview with MLB Network Radio, “the fact that we haven’t had anyone test positive yet is great.” The Phillies were tested Monday and Tuesday at Citizens Bank Park, then sent home.

MLB.com reported the Phils are expected to hold staggered workouts Wednesday and Thursday in South Philadelphia. NBC Sports Philadelphia reported it’s unclear if that will be the case. Both of these reports indicate the Phils will continue daily testing during this time. Before the outbreak, testing was occurring every other day.

Meanwhile, when Girardi was on the radio, Wednesday night’s game at New York had not yet been postponed, so he gave his answers were under the impression the Phils would be on a bus to the Bronx.

The Phillies did not make anyone available to the media on Tuesday despite the postponement of more games. That said, Girardi was in favor of MLB calling off Monday and Tuesday’s contests.

“The incubation period is two to 14 days, and I know we can’t wait 14 days, but I think we have to be really smart about this," he said.

But, what if the games against the Yankees can’t be made up? Girardi wasn’t specifically asked, but he made it clear that if a team plays fewer than 60 games, it's OK.

“I think this could happen more than this one time with an organization,” Girardi said. “And if everyone doesn’t play 60 games, I think that’s all right. We wanna get to the playoffs. That’s the important thing. So, if a team plays 57 games, you go by winning percentage to take the playoff teams, and you go from there.”

As of now, MLB has not made any public statement about how the standings would be calculated if all 30 teams didn’t play 60 regular-season games.

And, if for some reason the Phils found themselves in a compromised situation like they were over the weekend against the Marlins, Girardi said he probably wouldn’t feel comfortable having his team play as they did on Sunday.

“There’s too much at stake when you talk about players, and their health, and their family’s health.”

How will another pause affect the Phillies?

Baseball players are creatures of habit.

Being away from organized baseball activity for several months, and then having to ramp up quickly in three weeks was hard enough. Now, the Phils will go four days without playing a game after taking part in only three official ones, on top of three exhibitions and a handful or so of scrimmages.

From a baseball standpoint, the time off is something to keep an eye on.

What kind of social distancing was this?

Understandably, baseball players have to make a lot of adjustments, and some rather difficult. They can’t high-five. They can’t spit. They can’t lick their fingers. And they need to practice social distancing as much as possible, even while playing.

However, what happened in Houston Tuesday night was the exact opposite of social distancing.

In the Dodgers 5-2 win over the Astros, Houston infielder Carlos Correa and Los Angeles pitcher Joe Kelly got in an argument after Kelly struck out Correa in the sixth inning.

There wasn’t any fighting, but the benches cleared and many players got very close to one another.

Obviously, there’s history between the Astros and Dodgers with Houston’s 2017 sign-stealing scandal. Kelly was on the Red Sox that season, who lost to the eventual World Series Champion Astros in the ALDS. Los Angeles fell to them in seven games in the Fall Classic.

Tuesday, Kelly threw some pitches high and inside against Correa and Houston’s Alex Bregman. It was also alleged by Astros manager Dusty Baker that Kelly had some choice words for Correa.

Kelly claims he didn’t remember what was said, and also denied intentionally throwing at Correa and Bregman.

As far as the benches clearing, the ruling is simple: not social distancing.