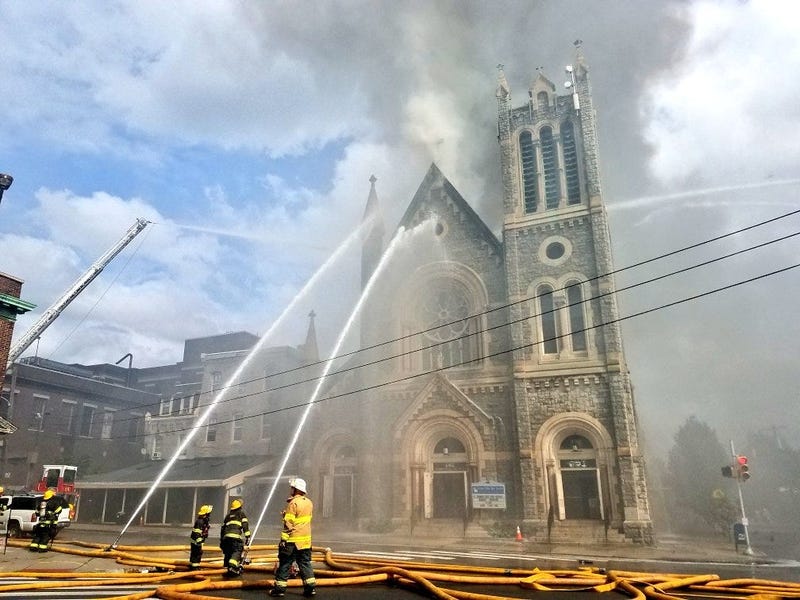 WEST PHILADELPHIA (KYW Newsradio) — The roof of a West Philly church is charred as firefighters continue to blast hot spots in the building with water Wednesday morning, following a three-alarm fire that broke out Tuesday afternoon.

The area surrounding the Greater Bible Way Temple near 52nd Street and Lancaster Avenue was cornered off by fire officials Tuesday afternoon and evening. The fire, which broke out before 3 p.m. Tuesday, has since been placed under control.

Fire Commissioner Adam Thiel said they were on the scene within minutes, including more than 75 fire officials and dozens of trucks.

At 4:20 media briefing, @ThielAdam says there is still heavy fire in the church, and portions have collapsed. Additional call for resources means 75-100 members on the fireground and 30-40 apparatus. PFD members will be on scene all night. pic.twitter.com/CaKP0jmrc4

The fire ravaged the entire church, and not much of the roof is left.

Officials say no one was injured, and all of the people inside the church were safely evacuated. One civilian was transported to the hospital for unknown causes.

One man who was nearby said he ran into the church to let the staff know that the church was on fire — they didn't even know the building was on fire when they were rushed out.

A look at the damage from the side. pic.twitter.com/p1FP01m4aI

Thiel said crews were on the scene all night.

Bishop Benjamin Peterson was emotional as he stood nearby with the church congregation and watched crews battle the fire, saying it's sad to see all this happen. His congregation stood with him and sang hymns to keep the spirit.

"We have wonderful memories of the 36 years we've been on this corner, and I declare in the name of Jesus the Christ that things just got better," Peterson said.

Church members said they were more concerned for the people who utilize the building, as the church also plays a role as a homeless outreach center, servicing 25 to 30 families on a daily basis, all of whom were able to get out of the church safely. They are trying to locate the individuals to make sure they have a place to stay for the foreseeable future.

The fire may be under control, but Regina Williams, who's been with the church for decades, said things aren't over yet.

"I guess the best way to tell our story is to say that we rise like a phoenix from this fire. If God allowed then he will provide. And we gonna continue to trust God even in this devastation. We're gonna trust God and know that he will work it out. Things just got better," Williams said.

Councilmember Janine Blackwell, who represents the district where the church is located, said work was being done on the roof before the fire started. Fire marshals have not yet confirmed what sparked the fire.

The Greater Bible Way Temple congregation began in 1957 at a mission near Ninth and Bainbridge streets. In 1971, the original building was also destroyed by a fire, so the church acquired a former movie theater near 60th and Spruce streets.

In 1984, Greater Bible Way moved to its present location, near 52nd and Warren streets, formerly St. Gregory's complex, which was built 115 years ago. In the early '90s, then Mayor Wilson Goode renamed Media Street to Bible Way Street.

Thiel said people should avoid the area, as the neighborhood was blanketed with dark smoke. Anyone who is having difficulty breathing as a result of the smoke should call 911.

Smoke inhalation is the leading cause of fire-related deaths, according to KYW Newsradio's Dr. Brian McDonough.

When people breathe in harmful particles and gases, it affects their airways and lungs, which can swell and block the flow of oxygen.

When this happens, oxygen isn't getting to the rest of the body, which can cause the heart to work harder to get blood with its oxygen around, possibly leading to heart attack.