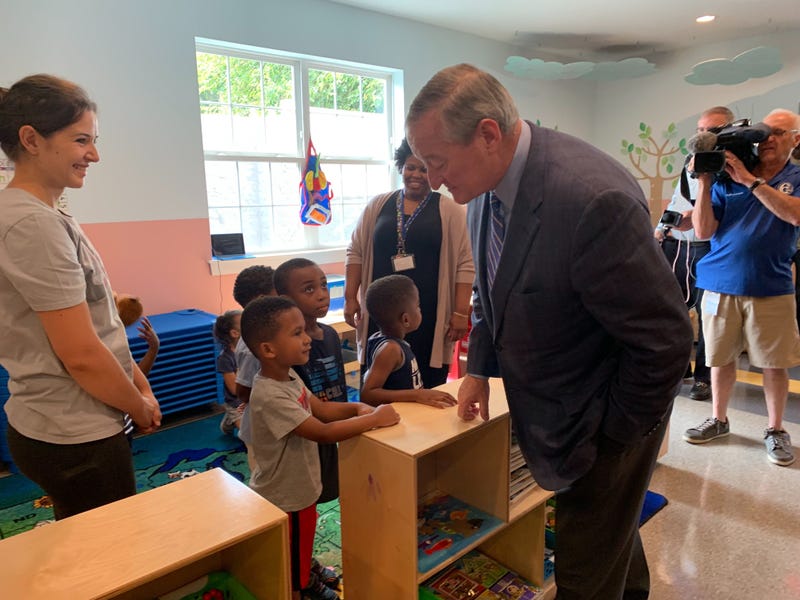 August 7, 2019 08/07/2019 4:33 pm
PHILADELPHIA (KYW Newsradio) — The city's free pre-school program is open for enrollment for the upcoming school year, and Mayor Jim Kenney is reminding parents to sign up.

All children who will be 3 or 4 by Sept. 1 are eligible for the PHLpreK program, which is available across more than 140 locations in Philadelphia.

Kenney promoted PHLpreK during a tour of The Children's Place Preschool in Tacony Wednesday morning — a new PHLpreK location — where he emphasized the quality of the free education.

"It is absolutely not babysitting," he said. "There is a real learning process that goes on in pre-K."

The program is available at no cost to families, but technically, it is funded through the city's beverage tax.

"We're paying for it with the beverage tax, so we're kind of paying for it ourselves because we're not getting much help from other governments, and I think it's money well spent," he noted.

There are no income or employment requirements for the program.

"We suspect that people who have excess income will not take advantage of the program and send their kids to a paid pre-K," Kenney said. "It's the poor folks and it's also the working poor folks that just work in making a living and making a wage but can't pay the thousands of dollars a year it takes to send a kid to a quality pre-K."

"They'll be filled by September," he said. "People wait until the last minute to do things. They're busy, obviously, and as we get closer to the opening school day, we'll get back up into the high 90s in registration."

And while promoting enrollment for The Children's Place, Kenney received a special surprise from preschoolers for his birthday.

"I kind of thought something was happening, but I wasn't sure," said the now 61-year-old mayor. The kids sang him "Happy Birthday" and presented him with a birthday banner, balloon arch and a cake.