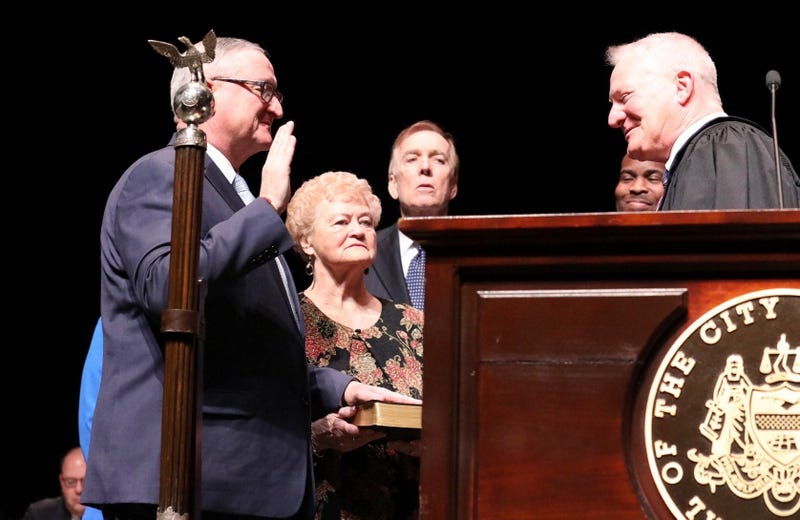 "We must continue to confront our greatest challenges, and capitalize on new opportunities, with the courage, conviction and resilience that we as Philadelphians possess," he said. "I want all Philadelphia children to sleep soundly at night, and wake in the morning with the desire and the quality education to go out and conquer the world. More than anything else, that is the goal that will drive our administration over the next four years."

Just hours after the ceremony, the mayor signed two executive orders. One created an Office of Children and Families, encompassing the Department of Human Services, which oversees child welfare and juvenile justice, as well as pre-K, community schools and prevention services such as youth workforce development.

⁦@PhillyMayor⁩’s mom holds bible for his swearing in (4 years ago it was his kids) pic.twitter.com/omOLoncZsq

The second executive order created the Racial Equity Initiative, requiring diversity and equity training for all city supervisors, the creation of equity plans by every department, and annual assessments of progress on the issue.

The mayor's inauguration address was augmented by the release of a report reviewing his first four years and setting the agenda for his next four, filling in details alluded to in his speech.

On the issue of improving safety, for instance, the mayor said in his speech, "nothing is more important to our administration than creating a safer and more just city for all of us."

The report says the goal is to reduce homicides by 30% and reduce the jail population by 50%.

He also called for police accountability.

"While most police officers perform their duties with compassion and integrity, those who fail to meet the standards of professional conduct, or demonstrate racist or sexist behaviors, must and will be held accountable," he said.

On education, the mayor promised continued investment in public schools, which he returned to local control during his first term.

"This isn't just the right thing to do," he said. "Our city's future depends on it."

The mayor also announced that the pilot street-sweeping program would be expanded to every neighborhood, though with some adjustments that would require residents to move their cars occasionally, a line that prompted laughter from the audience.

I’m extremely humbled and honored to be chosen by my colleagues to serve as majority leader of @PHLCouncil. I am excited to continue working alongside Council President @Darrell_Clarke and my colleagues to move this city forward to new heights. pic.twitter.com/dv6W1MqaaS

Clarke retained the presidency with no contest. He promised council would work collaboratively to advance the city's interests, pointedly addressing the business community.

"Let's put to rest once and for all any notions that City Council is somehow 'anti-business,'" he said. "We are for workers and for job-creating companies and for equity and opportunity for every individual and industry in Philadelphia."

Clarke also said Philadelphians would have to work together to prevent violent crime and to reduce poverty.

"There is nothing we cannot achieve if we work together," he said. "Let's look forward together and craft solutions that make Philadelphia a more thriving, inclusive and safer city for everyone."

Thank you to my @PHLCouncil colleagues for entrusting me with the honor of the Council Presidency once again.We have much work to do if we’re going to be the city we are capable of being. Let’s get there together. #phl2020 https://t.co/VOkR5Utoim

Also sworn in were city commissioners, a new sheriff and new register of wills, along with new and retained judges on common pleas and municipal courts.

Traditionally, the inauguration is held at the Academy of Music, followed by a walk back to City Hall for celebrations outside of council offices on the third, fourth and fifth floors, but the distance from the Met to City Hall prompted the mayor and most council members to drive back.

The party at City Hall was elaborate, especially on the fourth floor, where the desks moved from council chambers to the Met stage for the ceremony were replaced by gold cloth-covered cocktail tables, and guests ate lobster mac and cheese and shrimp cocktail served next to an ice sculpture of City Hall.