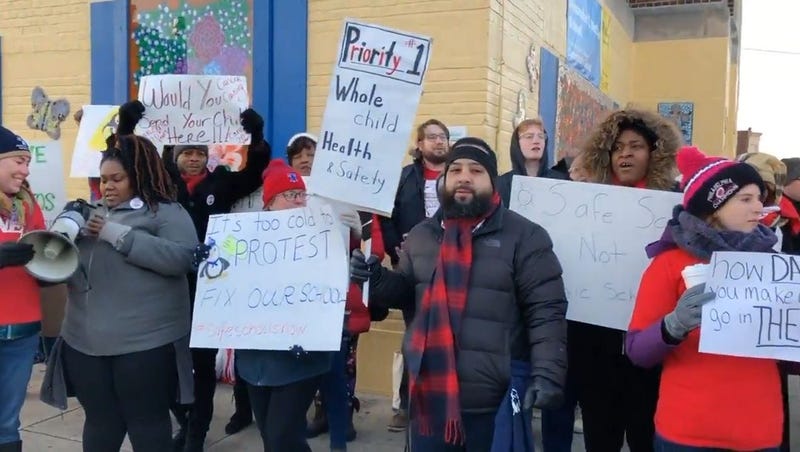 Parents and teachers demand the asbestos be fully removed from McClure before students return to class pic.twitter.com/5RL1oZlnxk

The struggle to remove cancer-causing asbestos from aging school buildings has turned into quite a mess for the School District of Philadelphia, and officials will have to do damage control in more ways than one.

McClure was closed on Dec. 19 for asbestos abatement. It re-opened on Wednesday.

But the Philadelphia Federation of Teachers said — on the day before students went back — that tests detected what they called "alarming" levels of airborne asbestos. District officials said that was cleaned up and the source was sealed off, questioning why teachers were concerned about re-opening the school.

The school was closed once again Friday morning when elevated levels of asbestos were found.

Teacher Rachel Boschen said she and her colleagues have been saying the building is unsafe for over a month, yet they were at school Thursday anyway.

"We entered a room, and I asked about the air quality in that room, and they said they did not test that room. We demanded that they test the room, and air quality tests came back elevated and unsafe," Boschen said.

Parents are angry, too.

Chenoa Manley is the mother of two students at McClure, and she said the district threatened parents with truancy court if they kept their kids home.

“It makes it look like I’m not doing my part as a parent not sending them to school, but you’re not doing your part as a school district making sure the environment is safe,” she argued.

Further air quality tests are being done. Results will be made available on McClure’s website. The public are urged to monitor the School District of Philadelphia website for updated information.

In a statement issued Friday afternoon, the district said it's not interested in the "politics."

“Last evening’s testing (Jan. 16) conducted at McClure, in conjunction with both the District and the PFT, exceeds what is required by law. The testing was also aggressive; technicians used leaf blowers to stir up the air which exceeds recommendations typical for diagnostic school testing.

"The decision to close McClure today was made so that the District and PFT could work together to thoroughly clean the third floor and the City Year office — work that was already scheduled to be completed this weekend.”

School board to hold administration accountable

The school board said it is planning to ensure that the district carries out its plan to seal off and remove asbestos from the school buildings.

To date this school year, at least six schools in the district have had to temporarily close for asbestos abatement.

Lee Huang, chair of the board's Finance and Facilities Committee, said he empathizes with the parents and teachers.

“We are also upset, and we stand with everyone who wants to help us in making our schools safer,” he said.

Huang said the board will hold the Hite administration accountable for executing its plan to manage and abate asbestos in district buildings. In November, Superintendent Wiliam Hite promised to hire more environmental workers to tackle the backlog of asbestos projects.

Hite's chief of staff, Naomi Wyatt, told the committee Thursday that the district was putting its asbestos inspection process on hold while they evaluate the process for quality control.

“We did put a brief pause to this inspection process while we do a quality review,” she said, “so that we're sure that even though we're using different firms, we're going to get the same kind of consistent results across the entire district.”

That's welcome news to Kelsey Dietrick, a teacher at the Franklin Learning Center, which recently reopened after an asbestos closure.

“Maybe you are trying to make some fixes. But is anyone there checking those fixes?” she questioned.

“What we hear is that there are whole floors that get missed on those reports. It's shoddy,” she said.

She believes principals need to be trained how to spot potential asbestos issues going forward.

“(I spent) eight years as principal in a school where a teacher is now dying of mesothelioma,” she added. “I walked through that school every single day and I did not know how to see asbestos in that school.”

It is not clear when McClure will reopen.