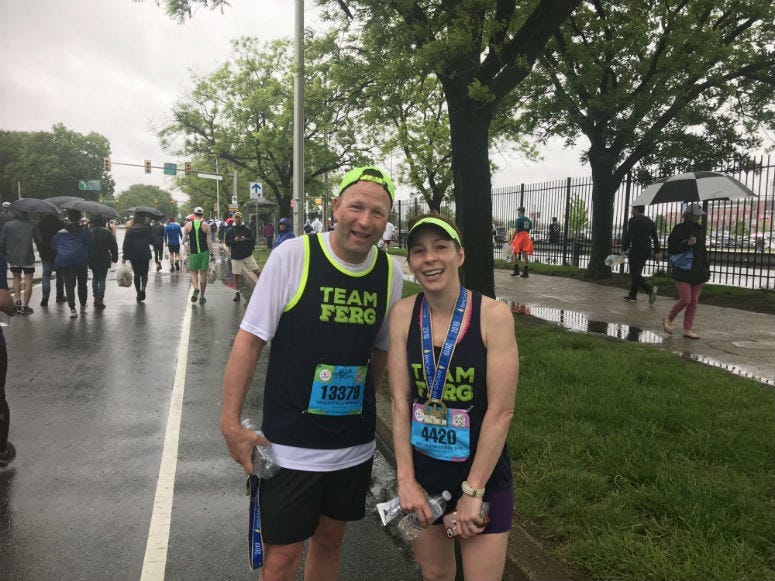 PHILADELPHIA (KYW Newsradio) — With a time of 47 minutes, 24 seconds, Daniel Kemoi was the first man to cross the finish line, while Susan Jerotich had the top women's time at 54 minutes and 43 seconds at the 40th annual Broad Street Run.
But there were a lot of other winners in their own right, too as the rain was no match for the 40,000 people who took over Broad Street for the 10 mile run that stretched from North Philadelphia to the Navy Yard in South Philadelphia.

For John Shafer, the rain was an added benefit.

"You know what, the rain doesn't bother you. You're going to get wet, big deal, that's just part of it. It keeps you a little bit cooler," he said.

John and Karen Gibble lost their friend Dave Ferguson last year and said the Broad Street Run was the next run he planned on participating in.

So they put a team together in his honor.

"We were happy to be out there, thinking of Dave, and smiling the whole way," Karen said.

She says for her, the run was cathartic.

"You know other people are out there with you. You're in it together, thinking about all the races he ran and the relationship we had," she said.

For Karen, John and the rest of team Ferg, the next leg of their race includes less running and a little more relaxation.

A lot of the runners like the ones on team Ferg say the run was a wet yet wonderful Philadelphia experience.

Chris Golub came from Brooklyn, New York, and stood in the rain for hours with his 9 month old and 2-year-old to cheer on his wife, brother-in-law, sister-in-law and a couple of friends.

"The conditions are not great, but the smiles are on everybody's faces. The energy is up. Honestly, it kind of makes it more fun. It makes it more memorable. This is one we'll never forget," Golub said.

Mike says having folks like Chris out cheering them on makes the run worth it.

"It definitely is motivating. I think it takes your mind off being tired a little bit. You feel the energy of the crowd, it gets your adrenaline going," Mike said.

Bob Germanovich braved the weather to cheer on his friend Meg and says he's just returning the favor, so a little rain is nothing.

"I couldn't exactly tell her no after she stood in the rain for three hours waiting for me to come to the finish line of a triathlon," Germanovich said.

Mike says the picturesque views of Philadelphia seen on the run make it worth it, rain or shine.

"You should do it. You should try it one time, it's really fun. Everyone who does it, I think loves it and wants to do it again. It's not an overwhelmingly intimidating distance. I think it's good for a first big race," he said.