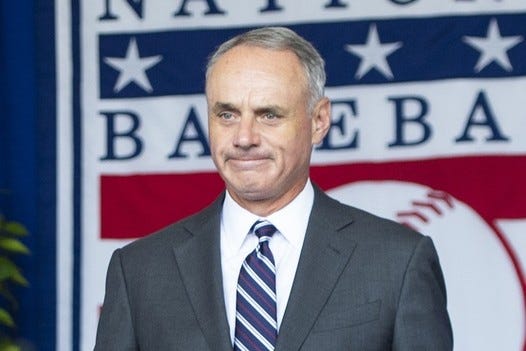 Five days after announcing on two different networks that there would "100%" be Major League Baseball games in 2020, Commissioner Rob Manfred flip-flopped.

Manfred’s sudden dip in confidence comes despite the March 26 agreement between MLB and the MLB Players Association giving him the power to order a shorter season — believed to be much shorter than either side has proposed in recent weeks.

That was the fail safe if the two sides couldn’t whip up a new agreement.

“I had been hopeful that, once we got to common ground on the idea that we were gonna pay the players full prorated salary, that we would get some cooperation in terms of proceeding under the agreement that we negotiated with the MLBPA on March 26,” Manfred said.

"Unfortunately, over the weekend, while Tony Clark was declaring his desire to get back to work, the union’s top lawyer was out telling reporters, players and eventually getting back to owners that, as soon as we issued a schedule, as they requested, they intended to file a grievance claiming they were entitled to an additional billion dollars."

In other words, the league and owners could possibly lose even more money than they say they’re going to with no gate revenue.

“Obviously, that sort of bad-faith tactic makes it extremely difficult to move forward in these circumstances,” Manfred said.

Clark issued another statement after hearing Manfred’s explanation on Monday.

“Players are disgusted that after Rob Manfred unequivocally told Players and fans that there would ‘100%’ be a 2020 season, he has decided to go back on his word and is now threatening to cancel the entire season,” the statement read, in part.

In addition to that, Manfred said money and the potential grievance aren’t the only issues. He alluded to health and safety. On the surface, this is very important, because the COVID-19 pandemic is the reason behind the baseball season delay.

But it gave the union pause on Monday because Manfred implied last week on MLB Network that the league and players were basically in agreement on health and safety.

“Any implication that the Players Association has somehow delayed progress on health and safety protocols is completely false, as Rob has recently acknowledged the parties are ‘very, very close,’” Clark continued in Monday’s statement.

Manfred says, “Given the course of the virus and what’s going on right now around the country, those health protocols are absolutely crucial. And we’re only gonna get there with dialogue that the union’s apparently not prepared to have right now.”

Are you dizzy yet?

And that leaves the next area of this mess: the fans. This back-and-forth undesirable drama is not something the consumers of Major League Baseball want. Fans still remember 1994, when they were denied a World Series because of a labor dispute.

“It’s just a disaster for our game, absolutely no question about it," he said. "It shouldn’t be happening, and it’s important we find a way to get past it and get the game back on the field for the benefit of our fans.”

Manfred said the league’s next move was to communicate in writing with the union on Monday to address things that needed to happen. "In order to cooperatively get back on the field," he said. "And we’re hopeful that we’ll get a more positive response to that overture."

It appears many players, while they want their full prorated salaries over a longer schedule, want to get back to playing first and foremost.

Phillies first baseman Rhys Hoskins tweeted, “Tell us when and where. We’re ready! We’ve been ready!”

Couldn’t agree more with a lot you, it’s not funny! But it’s getting to the point where it’s laughable. We want to play. We are ready. We have been ready! Unfortunately this has come at the expense of the fans and the game... which flat out sucks. We just want to play.

Speaking of jokes, Phils right fielder Bryce Harper is trying to find levity in the situation.

Rob Manfred and the owners are walking back on their word...AGAIN. The fans do not deserve this. So I’ll say it one more time, tell us when and where.

But, when asked to give a percentage this week on the chances of a 2020 season, Manfred told ESPN, “I do learn as I go along. Given how long my 100 percent prediction lasted, I’m not gonna handicap it again, but it’s something less than 100. That’s for sure.”

"We are running out of time. The clock is ticking on this, but the key, the important first step is a the willingness on the part of the MLBPA to get back at the table and engage in the process."