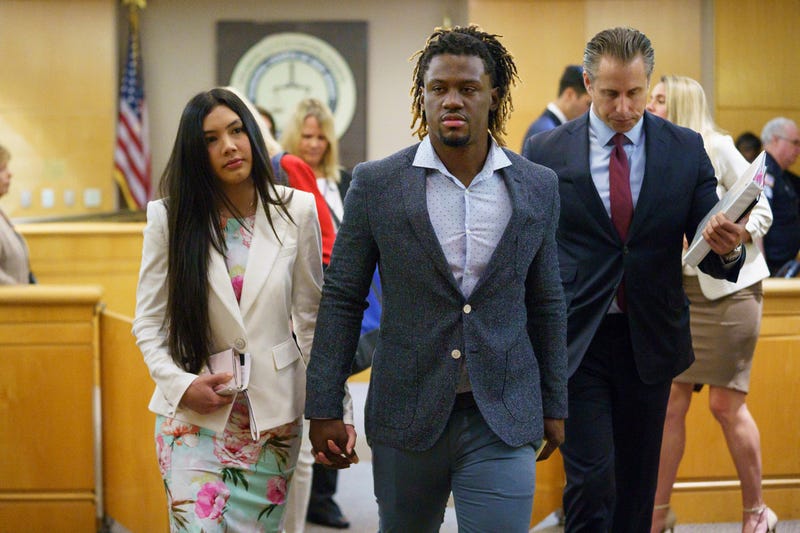 PHILADELPHIA (KYW Newsradio/AP) — Philadelphia Phillies outfielder Odúbel Herrera has been suspended for the remainder of the 2019 season, according to Major League Baseball.

Commissioner Robert D. Manfred Jr. announced Friday that Herrera has accepted his suspension, which would include the Postseason, for violating the league's Joint Domestic Violence, Sexual Assault and Child Abuse Policy.

The league says, Herrera has agreed not to appeal his unpaid suspension, which will be retroactive to June 24 and will cover 85 games.

Herrera will participate in a confidential and comprehensive evaluation and treatment program supervised by the Joint Policy Board, according to the MLB.

“My office has completed its investigation into the allegations that Odúbel Herrera violated Major League Baseball’s Joint Domestic Violence, Sexual Assault and Child Abuse Policy. Having reviewed all of the available evidence, I have concluded that Mr. Herrera violated the Policy and should be subject to discipline in the form of an unpaid suspension that will cover the remainder of the 2019 season,” Commissioner Manfred said in a statement.

“The Phillies fully support the decision by the Commissioner’s Office to suspend Odúbel Herrera for violating MLB’s Joint Domestic Violence Policy. All instances of domestic violence and abuse are abhorrent and unacceptable, and we unequivocally support Baseball's collective efforts to prevent domestic abuse.  We are encouraged by Odúbel’s acceptance of his discipline as an indication of his willingness to learn from this and change his behavior appropriately.”

#Phillies have issued the following statement on the suspension of Odúbel Herrera: pic.twitter.com/tNA3cD8jEn

Herrera was in Atlantic City Municipal Court on Wednesday morning, where his girlfriend, Melany Martinez-Angulo, reportedly dropped her complaint. Herrera had been charged with assaulting her on May 27 at the Golden Nugget Casino.

Court documents indicate that, although criminal charges were dropped, the judge in the case has ordered Herrera to complete anger management counseling within 60 days.

Martinez-Angulo assured the judge no one had pressured her to drop the case. The two emerged from the courtroom holding hands and declined to speak with reporters.

"Ms. Martinez and Mr. Herrera are looking forward to getting on with their lives and on with their loving relationship together," his attorney, Thomas Calcagni, told reporters outside the courtroom in Atlantic City.

Police were called to the Golden Nugget in May on a report of a domestic assault. They found a woman with signs of injury to her arms and neck, which they said were caused by Herrera. Police said "handprint markings" and scratches were found on her. He was placed on leave by Major League Baseball afterward.

Herrera remains on administrative leave from the Phillies through Friday, while Major League Baseball investigates the incident. The league can still discipline Herrera under its domestic abuse policy.

Tonight, the Phillies will look to open up a series against the Met in New York.