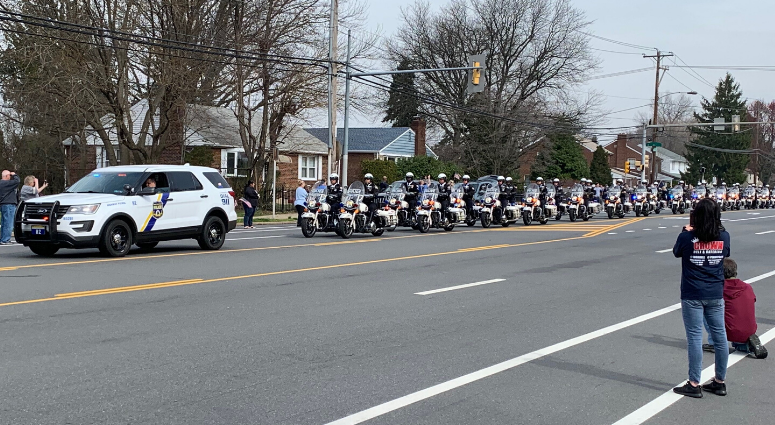 March 20, 2020 03/20/2020 3:39 pm
NORTHEAST PHILADELPHIA (KYW Newsradio) — Hundreds of police cars and motorcycles made their way across Northeast Philadelphia Friday morning to honor the life of Philadelphia Police Sgt. James O'Connor, who was killed March 13 while serving a warrant for murder.

O'Connor’s funeral was supposed to take place Friday, but it has been postponed indefinitely due to concerns over the coronavirus outbreak and restrictions against large crowds. Instead, fellow officers staged a massive memorial ride as a show of support for O'Connor's family.

The caravan gathered at the Philadelphia Mills shopping mall and drove past O'Connor's house about a mile away, while still maintaining social-distancing.

It seems every @PhillyPolice vehicle in the city is here. pic.twitter.com/z4y0BYCTkY

A woman holds her hand over her heart as Sgt. O’Connor’s procession passes. pic.twitter.com/pSzckNbnWi

“It's a vehicular procession, so everyone's going to be either in their vehicles or mounted on their wheels,” he said. “There won't be any stopping to get out of the car — which, again, we have to be mindful of that.”

Police motorcycles led off the procession, followed by O'Connor's SWAT team, commanders, city officials, police agencies from outside Philadelphia, and even a police helicopter. Some held American flags, others had homemade signs.

Traffic Division Sgt. Michael Davis was among those in the 45-minute procession along Knights Road.

“We want to show them they have support. He was a member of our family, and we’ll do whatever we need to do to help them in their time of need and to help us all to get through what’s going on,” he said.

And in a time when people are encouraged to practice social distancing, one officer, who didn’t want to give her name, said it’s a time to stay emotionally close.

“We all want to show solidarity and stick with them,” she said. “We’re all family. We all stick together. There is no social distancing. We’re out here working the streets. There’s no reason why we can’t be here today and be here for his family.”

In a statement, the O’Connor family said: "We will always cherish our memories of our husband, father, friend and hero James O’Connor IV.  We also wish to say thank you to all the men and women of law enforcement who participated in today’s ride. It touched our hearts."

Whenever O’Connor is formally laid to rest, officers say they’ll come together again.