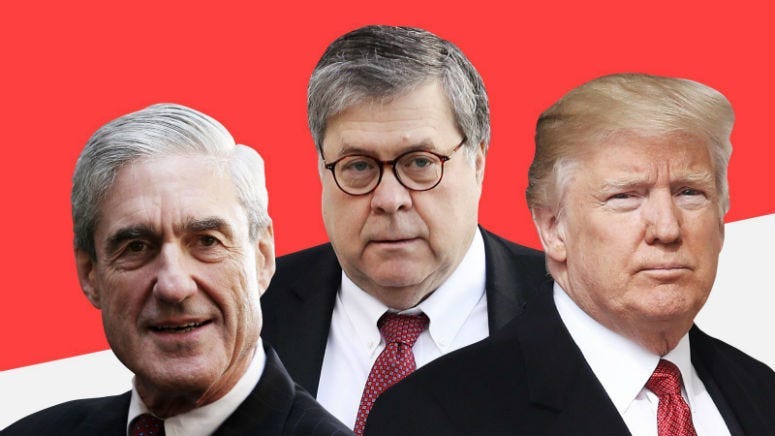 May 1, 2019 05/01/2019 12:02 am
By Laura Jarrett and Kate Sullivan, CNN
(CNN) -- Special counsel Robert Mueller expressed concerns in a letter to Attorney General William Barr that Barr's four-page letter to Congress summarizing the "principal conclusions" of Mueller's findings didn't fully capture his 448-page report, according to a source with knowledge of Mueller's letter.

Later, Barr and Mueller spoke by phone and while Mueller didn't think Barr's letter was inaccurate, the special counsel believed his report was more nuanced on the obstruction of justice issue, according to Justice Department officials. Mueller was frustrated by media coverage, and wanted more of the report to come out, those officials told CNN.

Barr's position was he wasn't going to do so in a piecemeal way, so he was pushing the special counsel's office to finish the redactions of the full report as soon as possible.

At the same time, senior Justice officials have been puzzled by Mueller's decision not to reach a conclusion on the obstruction issue and Barr felt he needed to provide finality on the matter as the attorney general.

According to a source familiar with Mueller's letter to Barr and subsequent call with the attorney general, the letter from the special counsel's office came in on March 27. It was first reviewed by Deputy Attorney General Rod Rosenstein's office and is roughly a page in length.

After reviewing it, Barr called Mueller the following day. Barr said something to the effect of "we've been friends for a long time, let's talk about this," according to a source with knowledge of the call. The call was described to CNN as polite, but there was clear disagreement.

Justice Department spokesperson Kerri Kupec said in a statement Tuesday that Mueller did not tell Barr that anything in the letter was factually wrong.

"In a cordial and professional conversation, the Special Counsel emphasized that nothing in the Attorney General's March 24 letter was inaccurate or misleading. But, he expressed frustration over the lack of context and the resulting media coverage regarding the Special Counsel's obstruction analysis," Kupec said.

"They then discussed whether additional context from the report would be helpful and could be quickly released. However, the Attorney General ultimately determined that it would not be productive to release the report in piecemeal fashion. The Attorney General and the Special Counsel agreed to get the full report out with necessary redactions as expeditiously as possible. The next day, the Attorney General sent a letter to Congress reiterating that his March 24 letter was not intended to be a summary of the report, but instead only stated the Special Counsel's principal conclusions, and volunteered to testify before both Senate and House Judiciary Committees on May 1st and 2nd."

As a part of the letter from Mueller's office, the special counsel's team enclosed a redacted version of the introduction and executive summaries that appear in the report. But, at that point, the materials had not been deconflicted with the intelligence community and so Justice officials did not believe they could make them public without further review, according to the source.

Barr told lawmakers in congressional testimony on April 10 -- weeks after Mueller's letter -- that he didn't know if Mueller supported his conclusions.

Barr is scheduled to testify in front of the Senate Judiciary Committee on Wednesday in a highly anticipated hearing on the Mueller report.

Democratic presidential candidate Sen. Amy Klobuchar of Minnesota, a member of that committee, posted on Twitter, "Major breaking news. And tomorrow Barr will have to answer for this at our hearing. Updating my questions!"

House Judiciary Chairman Jerry Nadler, who is in a standoff with Barr over his scheduled Thursday testimony before the committee, tweeted he has "demanded" Mueller's letter. In a statement Tuesday night, the New York Democrat said the letter from Mueller must be delivered to the committee by 10 a.m. Wednesday.

"Attorney General Barr also should not have withheld this letter from Congress for as long as he has," Nadler said.

"The Attorney General has expressed some reluctance to appear before the House Judiciary Committee this Thursday," he added. "These reports make it that much more important for him to appear and answer our questions. The Department of Justice has also been reluctant to confirm a date for Special Counsel Mueller to testify. Given this evening's reports, I will press the Department to schedule that hearing without delay."

Criticism from the Democratic contingent in Congress was swift, including from New Mexico Democratic Rep. Ben Ray Luján. He told CNN's Erin Burnett on "Erin Burnett OutFront" that Mueller's letter expressing concern to Barr "is both concerning and not surprising."

"This is the problem when Bill Barr acts as the personal attorney to the President as opposed to the attorney general of the United States of America, and tomorrow there is going to be a lot of very important, tough questions that have to be asked and that must be answered," Luján said.

Virginia Sen. Mark Warner, the top Democrat on the Senate Intelligence Committee, said Barr should have never been confirmed.

"At this point he has lost all credibility, and the only way to clear this up is for Mr. Mueller to testify publicly," Warner said.

On March 24, Barr submitted the letter to Congress summarizing the main conclusions from Mueller's report. Barr determined there is not enough evidence to establish that President Donald Trump obstructed justice, even though the special counsel did not exonerate the President on that question.

Earlier this month, Barr held a news conference before the redacted report was released by the Justice Department where he framed Mueller's report in Trump's language. He said the report found no wrongdoing by Trump and framed the report on the premise that its findings were favorable to the President.

The redacted version of Mueller's report didn't find conspiracy or coordination between the Trump campaign and the Russian government. Mueller did not decide whether Trump obstructed justice in violation of the law, though he investigated it thoroughly and found in several instances both potentially obstructive behavior and motive.

After the release of Mueller's redacted report and Barr's news conference, some Democrats on Capitol Hill called for Barr's removal as attorney general. Senators running for president -- including Kamala Harris of California, Elizabeth Warren of Massachusetts and Cory Booker of New Jersey -- all said Barr acted like the President's defense lawyer, not the attorney general of the United States.

The Mueller report documents at least 77 specific instances where Trump administration officials, family members, campaign staff, Republican backers and the President's associates lied or made false assertions (sometimes unintentionally) to Congress, the public or authorities, according to a new CNN analysis.