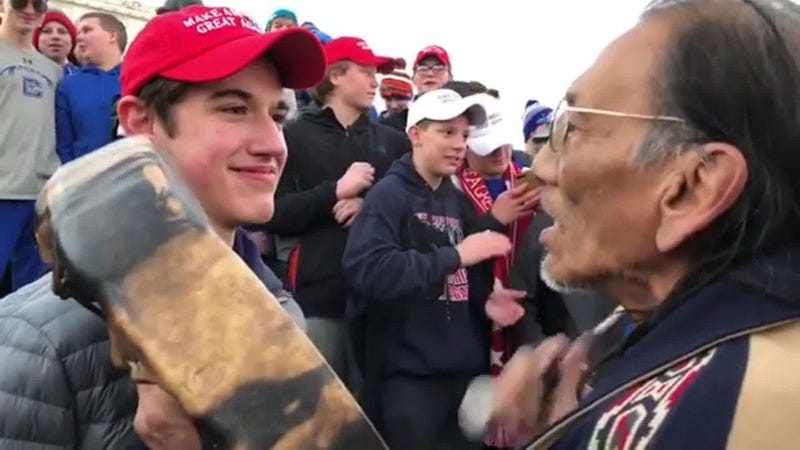 January 23, 2019 01/23/2019 12:44 pm
By Amanda Watts and Eric Levenson, CNN
(CNN) -- Omaha Nation elder Nathan Phillips is offering to travel to Covington Catholic High School in Kentucky to talk about the importance of respecting diverse cultures, according to a statement from the Lakota People's Law Project.

Video of an encounter between Phillips and Covington Catholic students at Washington's Lincoln Memorial on Friday has stirred debate for days. Phillips was at the memorial for the Indigenous Peoples March and the students were there for the March for Life rally.

Phillips, the Indigenous Peoples March and the Lakota group are trying to set up meetings with the students, members of the community and church officials, the statement said.

RELATED: Boys school shuts down amid fallout over Washington videos

In an interview to air Wednesday on NBC's "Today" show, a student in the video, Nick Sandmann, indicated he's open to speaking to Phillips.

"My position is that I was not disrespectful to Mr. Phillips," Sandmann said. "I respect him, I'd like to talk to him."

Videos of the encounter from different angles led to polarized opinions on whether the teens were mocking Phillips or whether Phillips was interfering with them.

Phillips said he decided to approach the teens when he saw an escalating situation between them and another group, leading to the faceoff with Sandmann. He described the situation as tense and said he feared for his safety.

President Donald Trump publicly sided with the group of students, calling them "symbols of Fake News and how evil it can be." On Tuesday, press secretary Sarah Sanders said the students were invited to the White House, but any meeting would take place after the partial government shutdown ends.

Sandmann previously denied negative characterizations of his behavior and that of his classmates.

When NBC's Savannah Guthrie asked Sandmann whether he felt he owed anyone an apology for his role in the encounter, he said that "as far as standing there, I had every right to do so."

"In hindsight, I wish we could have walked away and avoided the whole thing," Sandmann said.

The school was closed Tuesday, but will reopen Wednesday morning, according to a letter from the high school to parents obtained by CNN affiliate WCPO. The letter notes there will be a police presence around the school and mentions various procedures that are being implemented following the reopening.

On Tuesday, the Diocese of Covington and Covington Catholic High School took precautionary measures after "threats of violence and the possibility of large crowds" at a planned protest at the school, a joint statement said.

The diocese and school also reiterated that an "independent, third-party investigation" will begin looking into the incident this week.

"This is a very serious matter that has already permanently altered the lives of many people. It is important for us to gather the facts that will allow us to determine what corrective actions, if any, are appropriate," the statement said.

A second video surfaced Sunday showing another group, which identifies itself as members of the Hebrew Israelites, taunting the mostly white students with disparaging and vulgar language before the encounter with Phillips.

Sanders said the move came after threats against the school and some students in the wake of the incident.

"After meeting with local authorities, we have made the decision to cancel school and be closed on Tuesday, January 22, in order to ensure the safety of our students, faculty and staff," says a letter from school Principal Robert Rowe that was posted on CNN affiliate WKRC's website.

"All activities on campus will be canceled for the entire day and evening. Students, parents, faculty and staff are not to be on campus for any reason. Please continue to keep the Covington Catholic Community in your prayers," Rowe wrote.

Other schools in the area were also closed, but due to inclement weather. Covington Catholic also appeared on WKRC's school closure list, but the weather was not mentioned in the principal's statement.

Peace vigil a 'call for an end to racism'

The American Indian Movement Chapter of Indiana and Kentucky held a "peace vigil to call for an end to racism" on Tuesday morning at the Diocese of Covington.

"We are here to have a dialogue with the diocese, asking them to hold those chaperones accountable," Thomas Pearce, the group's co-chair, told CNN at the vigil.

"That should have never happened in D.C. If the chaperones were doing their jobs, that wouldn't have (ever) happened."

Pearce said the diocese has not responded to the group's request to meet. CNN has reached out to the diocese and has not heard back.

Guy Jones of the Hunkpapa Lakota from the Standing Rock Reservation in South Dakota said the main goal is education.

"We fix stuff by sitting down and talking to one another and working for a common goal," said Jones, who lives in Dayton, Ohio, and is part of the Greater Cincinnati Native American Coalition.

"That's what we're looking for. Let's find that common ground that we can all work together and make something better."