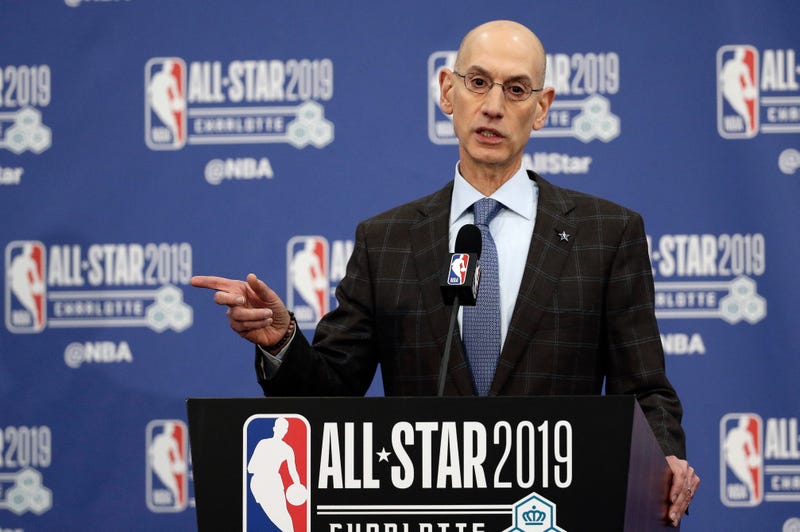 If all goes according to plan, some of the country's four major professional leagues could be returning later this month. The NBA planning to hold its first game in Disney World on July 30. The 76ers' first game is Aug. 1 against Indiana.

But with cases spiking in some parts of the United States, what if the virus becomes too overwhelming? Will the NBA push on, despite enormous public safety risk?

On Tuesday, NBA Commissioner Adam Silver was asked during a Time 100 Talks series if the league will resume no matter what.

While Silver is realistic about the threat of COVID-19, he’s still confident in the NBA’s plan to hold the rest of its season and playoffs in Orlando at ESPN’s Wide World of Sports Complex.

“When we designed this plan, we were not seeing the kind of increase in cases — frankly not just in Florida and Texas, at least as of the last few days — the majority of states in the United States are seeing increases in COVID cases," he said. "So, it’s not as if ... there’s any safe way to predict or pick a market where we’ll be confident that the cases will be sufficiently down."

He said the model they used to construct the plan was designed to protect the league and the players from the cases in the outside community.

"Maybe at the time we designed it, we didn’t think it would be as necessary as it is now, but at least we’re preparing for it.”

To Silver, it’s the NBA’s duty to try to make this work for their fans, even if it's not an economic win.

“We feel an obligation to our sport and to the industry to find our new normal. ... Frankly, it’s not all that economical for us to play on this campus. It’s enormously expensive.”

Kneeling during the anthem

An NBA restart would come with what many say is a tremendous platform to bring awareness to social issues.

“It provides a megaphone, in many ways, to talk about the issues that are important to all of us,” Silver said.

Silver was asked if that will include allowing players to take a knee during the national anthem.

“I’m not comfortable with the word ‘allow,'" he said. "I think we’ve had a rule on our books that goes back to the early '80s — it precedes even David Stern’s tenure as commissioner — that calls for players to stand in a line at attention during the national anthem. I also understand the role of protest, and I think that we’ll deal with that situation when it presents itself.”

Silver said he supports athletes voicing their opinions on important issues, “but I also recognize these are not always such easy issues to work through."

He said, with the responsibility of running a league, there must be a balance between social justice actions and action on the court.

"I’ll just say those are difficult issues," he said.

Returning to the question of the national anthem, Silver said he understands the appeal of people finding unity when standing for "The Star-Spangled Banner," and he also recognizes there is a time and place for appropriate protest.

"And I also understand that, when that line-drawing comes into play, invariably you’re gonna upset some faction out there. And I think, at the end of the day, we just sort of have to be true to ourselves and the values that underly this league and try to make value-based decisions rather than political ones.”

“They probably are some of the most prominent Black people in the entire world. They don’t just park their skin color, or who they are, when they play basketball. They have their life experiences, and they want to bring those to bear, and we, as the league, try to work through those issues with our Players Association."

It’s no secret that, as a matter of public safety, fans won’t be allowed at these games if the NBA can resume play later this month.

Silver said it will be worth watching how all sports, not just basketball, enhance the television experience for fans at home.

The commissioner said he’s been looking at how international soccer has handled telecasts from empty venues.

“We’re trying to find a way to re-invent the experience, to a certain extent, where we want crowd noises, but we don’t wanna just be a function of somebody with a hand on a knob turning up the volume," he said.

He said they're looking at a way for fans to race remotely, through an app for example, to represent cheers — or jeers.

"We want to find new ways to engage for fans, and because we don’t have fans in seats, we can put cameras in places we haven’t been able to historically," he said.

“We’re talking to the players about mic’ing, and creating new audio experiences that we haven’t had historically.”

Silver says if something doesn’t work, the NBA will make adjustments. And he indicated that a delay might be necessary for their broadcast feeds, to catch potential trash talk that would normally be drowned out by crowd noise.​