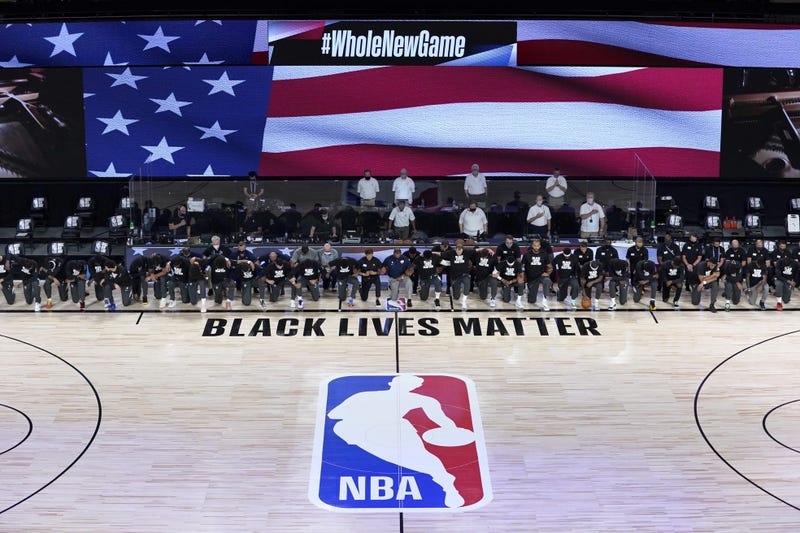 PHILADELPHIA (KYW Newsradio) — NBA action is back, and a huge focus of players' first night back on the court was on social justice.
“There’s been progress,” Lakers superstar LeBron James told TNT, "but in the past, when we’ve seen progress, we’ve let our foot off the gas a little bit. We can’t do that."

“We want to continue to put our foot on the gas… continue to spread love throughout America.”@KingJames discusses the NBA's restart & social change w/ @JaredSGreenberg. pic.twitter.com/HubuVKV03X

Prior to Jazz-Pelicans and Lakers-Clippers, players wearing Black Lives Matter shirts locked arms and kneeled in unison during the national anthem.

The @Lakers and @LAClippers kneel during the National Anthem. pic.twitter.com/A0OdsXNKm3

The NBA has a rule that predates the late David Stern’s tenure as commissioner that requires everyone to stand during the anthem. Commissioner Adam Silver said in a statement to ESPN: “I respect our teams' unified act of peaceful protest for social justice and, under these unique circumstances, will not enforce our long-standing rule requiring standing during the playing of our national anthem.”

After the Lakers' 103-101 victory, James spoke to reporters. "Hope we continue to make (Colin Kaepernick) proud every single day. Hope I make him proud on how I live my life not only out on the basketball floor, but off the floor."

Clippers Head Coach Doc Rivers explained the importance of kneeling during the anthem by referring to George Floyd, who died in Minneapolis police custody in May when an officer pressed his knee on Floyd's neck until after he stopped breathing.

"The hardest thing that happened to me in the game today was kneeling for two minutes,” Rivers said. “Like, my knee was hurt. And in the middle of it, I’m thinking, ‘In two minutes my knee is hurting, yet there was a guy that had his knee on someone’s neck for eight minutes.’

Some players Thursday night had social justice messages on their jerseys. Prior to the official restart, the NBA released the list of players on every team who are using that platform.

Messages worn by the Sixers:

Thybulle said he chose “Vote” because his father grew up in Haiti under a dictator.

“I think back to being a kid. Only education I had on voting was 'Schoolhouse Rock.' And how many of us still remember those songs? It’s not something that’s spoken about enough," Thybulle said.

Richardson explained why he chose “Say Their Names.”

“I’m just trying to be a vessel for this movement that’s finally happening," he said.

“And you can go down the list. Breonna Taylor is at the forefront. George Floyd, Michael Brown. On a smaller scale, where I’m from (in Edmond, Oklahoma), a kid named Isaiah Lewis was killed by police unarmed, and it’s just it’s too many instances of it happening.”

“This is bigger than basketball, and I know there are probably plenty of guys who were thinking about of not even coming to this bubble (in Orlando) because of everything that’s happening right now, me included. So, we’re here, we love basketball, we’re trying to win a championship, but at the same time, there’s a bigger thing going on that we’re all honestly here for.”

Both games on Thursday went down the wire.

Part two of the double header — Lakers vs. Clippers — was a 103-101 Lakers victory, thanks to James’ game-winning bucket with 12.8 seconds to go.

Another look at LeBron’s game-winner -- pic.twitter.com/7OhEAaxXTL

And in the first game, Jazz All-Star Rudy Gobert — whose positive coronavirus test in March sparked the league’s shutdown — scored the first and last points in Utah’s 106-104 victory over the Pelicans.