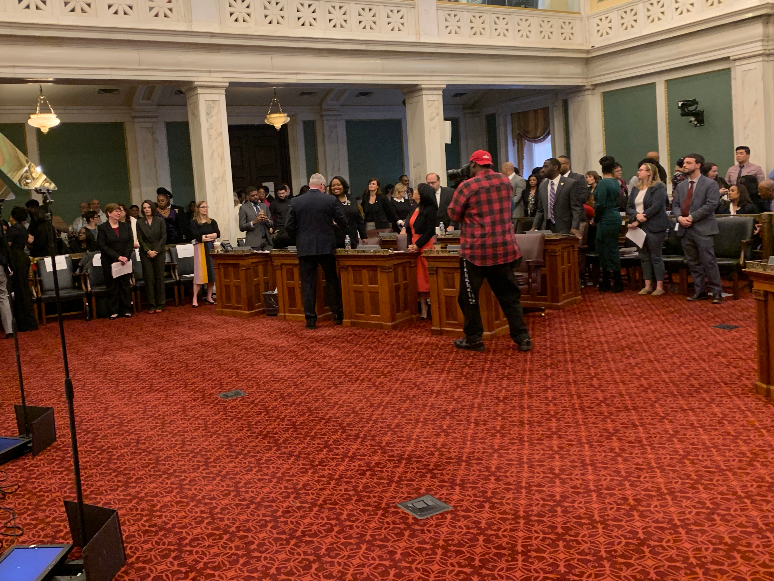 Gilmore is a new Philadelphia City Councilmember but she was a legislative aide in Council for five years, and she heard the constant refrain that kids of color from low-income areas need a better shot at good jobs.

Philadelphia's Career and Technical (CTE) schools are full of those kids and they have skills that qualify them for good jobs but they still have trouble landing them.

The city, she figured, could help.

On her first day in Council, she introduced a package of bills proposing a charter change referendum to give CTE graduates a preference on the civil service exam to help them get those jobs. It passed through committee and she had hoped to get it on the primary ballot.

But last Thursday, she put the bills on suspension, after a protracted campaign against them by military veterans, set in motion by her colleague, Republican at-large member David Oh.

Week after week, dozens of veterans came to Council's Thursday session to testify against the bills during the public comment period. Richardson often met with them separately and offered amendments to make the bills more palatable but was unable to end their weekly tirades.

"I was upset that someone could utilize a misinformation campaign to negate good work for young people," she said in an interview, not mentioning Oh specifically. "We should not weaponize groups against each other for our own personal benefit."

Oh denies he was responsible, though he admits he alerted veterans groups to the bills.

"Veterans are already a very organized group of people," he said. "When a bill is introduced that affects veterans, they will come out."

But whether the bills would have affected veterans is in dispute.

Oh, a veteran himself, argued that giving CTE graduates a preference somehow negated the preference that veterans receive on the civil service test.

Richardson, whose father was a veteran, says that is untrue. The preferences are one factor in the city's hiring practice, and CTE students are not in direct competition with veterans.

"This legislation had nothing to do with taking points away from anyone," she said.

Every veteran that came to testify, though, made the same argument Oh did: that preferences should be reserved for people who have made a sacrifice for the good of the country.

This was not the first time that Council was flooded during its public comment period with members of the public who agree with Oh's viewpoint on legislation and return weekly to share it.

While it's quite common for Councilmembers to recruit advocates to comment when their bills are up for a vote, Oh has shown a unique ability to use the public comment period to change the expected outcome of a vote.

Council, for example, defeated his resolution creating a committee on family separations in the child welfare system last year only to reverse course after parents came by the dozens, weekly, to testify in favor of it.

Richardson's bill had been expected to pass easily before the veterans began testifying at each session.

Mustering constituents in this way has given Oh leverage that he would otherwise lack as one of only two Republicans among Council's 17 members.

Oh said he considers this part of his job.

"Notifying constituents is certainly something that elected officials can do and should do," he said.

Pat Christmas, policy director for government watchdog Committee of 70, says it can have a downside.

Richardson says she hasn't given up on the measure. She says she will be meeting with veterans groups and trying to make sure they have the correct information.

"We will slow down the process to give everyone an opportunity to meet with our office," she said. "We also introduced legislation to provide a preference for children and grandchildren of soldiers who die in the line of duty and we hope we can eventually pass them both together."