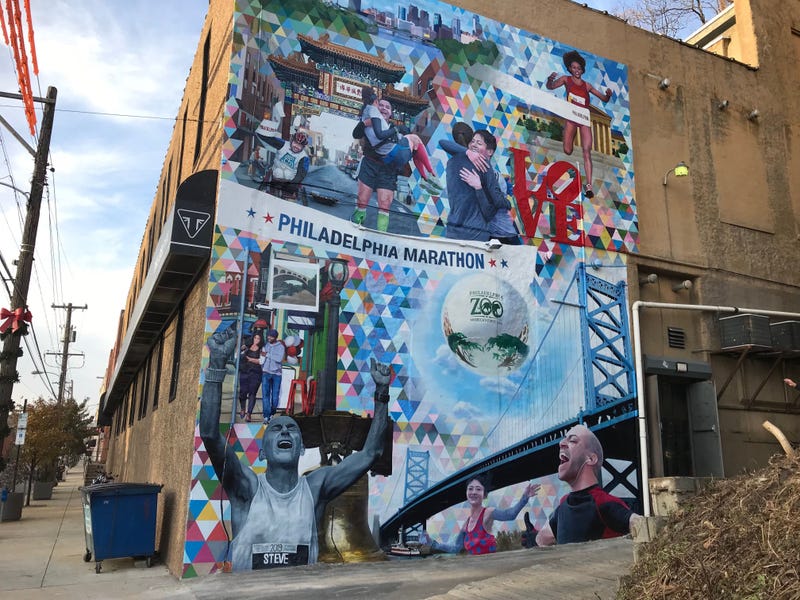 The mural, created by artist Kala Hagopian, is at mile marker 19 of the marathon, on the side of the Quaker City Motor Sport motorcycle dealership at 3901 Main St. It depicts runners traveling across a number of Philadelphia landmarks, including Chinatown's Friendship Arch, the Ben Franklin Bridge, and the Art Museum.

According to marathon spokesperson Jennifer Sherlock, the mural took six months to complete. "It just shows what the runners go through, and why they love coming back year after year to the city," she said.

In addition to commemorating the city, Sherlock also presented the mural as a testament to the grit of marathon runners. "It shows that triumph that one feels after they accomplish running over 26 miles after training for so long to be able to accomplish that feat," she said. "Not everyone can do it."

Sherlock said the placement of the mural was intentional, as a pick-me-up to those who might struggle by the time they reach that part of the route.

"This is the point of the run where they'll start seeing a lot of cheerleaders. Manayunk is infamous for having a lot of people having brunch and cheering folks on," she explained. "So this is the part of the race where they need that extra push."

Sherlock likened the mural to the iconic theme song from "Rocky," "Gonna Fly Now," as something to inspire the runners to press forward.