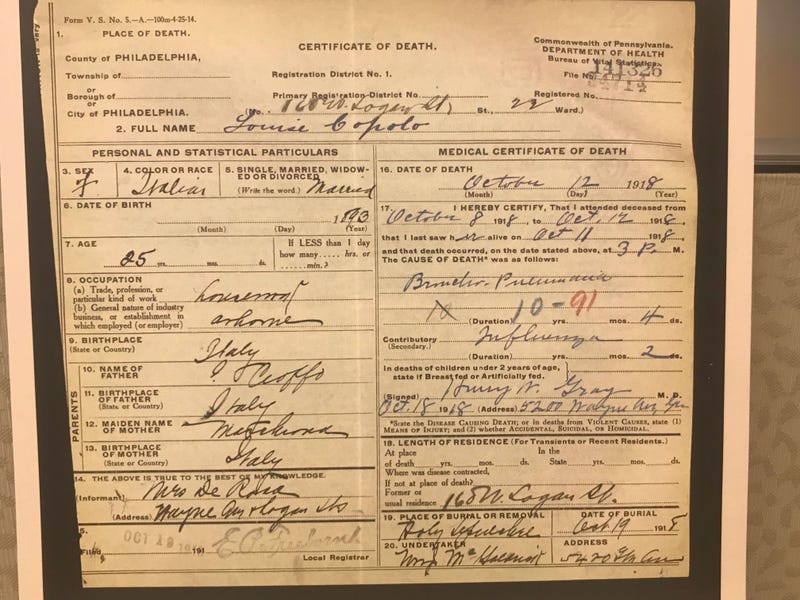 October 14, 2019 10/14/2019 8:30 am
PHILADELPHIA (KYW Newsradio) — "Spit Spreads Death: The Influenza Pandemic in Philadelphia in 1918" opens on Thursday at the Mütter Museum and Historical Medical Library of the College of Physicians of Philadelphia. The exhibit will serve as a public remembrance honoring the lives lost, while asking the question, "Could it happen again?"

Museum director Robert Hicks said the death rate was very high. No one knows exactly, but the epidemic killed an estimated 50 million to 100 million people around the world that year.

"It might have been the biggest killer in human history," said Hicks. "Philadelphia was one of two cities, Pittsburgh the other that had the highest mortality rate of any American city."

He says it happened in the shadow of World War I. The war was front page news, while the deadly flu was a mere footnote.

"And there is a good reason for that," explained Hicks. "There was a big fundraising push in the United States to buy war bonds to support all of this, so the flu doesn't get prime mention. The president of the United States never makes a public comment on it before, during or after. So we decided to examine this."

Digital interactives are situated throughout the exhibit. In one of them, you can enter a last name and neighborhood and explore the toll the epidemic had on Philadelphia in particular.

On Saturday, free flu shots will be given to visitors.