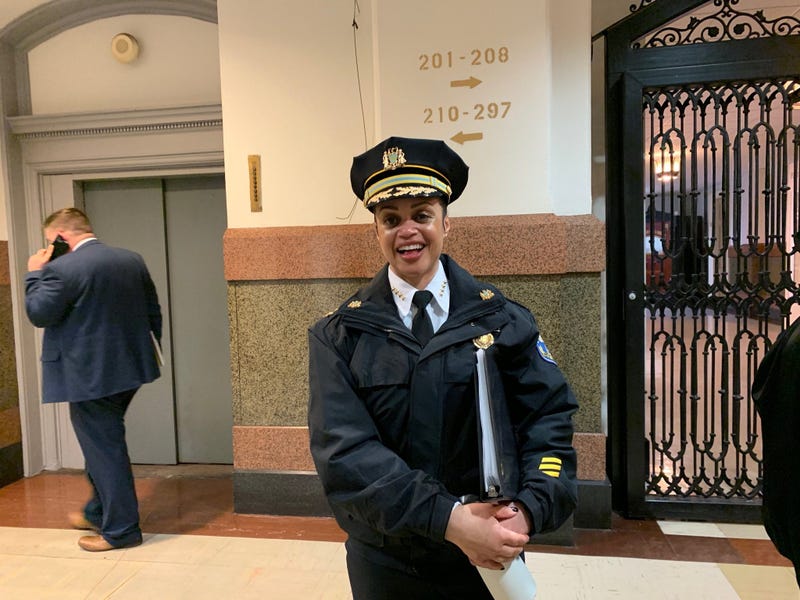 PHILADELPHIA (KYW Newsradio) — Monday was the first day on the job for Danielle Outlaw, the new commissioner of the Philadelphia Police Department. The top cop got her busy day started at police headquarters, but she didn't stay long.
Outlaw was in plain clothes when she arrived at 5:45 a.m. Inside, she met with now-former acting Police Commissioner Christine Coulter.

Commish Outlaw says she’s heading to the different districts in the city for some “face time” to start her first official day. @KYWNewsradio pic.twitter.com/RtwvkK4ouw

After about an hour, Outlaw, in full uniform, was out the door to visit police districts throughout the city to meet some of the 6,500 officers she’s now in charge of.

Coming out of her first anti-violence meeting with city officials and the mayor, Outlaw said it was a long, productive day.

"It’s been a great day thus far. I have had an opportunity to meet a lot of people, a lot of names, a lot of faces obviously to remember and keep it together, but so far so good," she said.

The weekly meeting held with city leaders is focused on combating gun violence and the homicide rate.

At a separate event in Kensington, Mayor Jim Kenney said he talked to Outlaw over the weekend.

"I told her (Sunday night) on the phone, this is your department, you run it as you see fit. You are not going to get any interference from the second floor of city hall," he said.

He chose Outlaw in late December to lead the state’s largest police department.

"She was selected because she was the most qualified person that presented herself for the job. She happened to be an African-American woman, and that’s added benefit to kind of changing the culture of the police department," Kenney added.

Fraternal Order of Police President John McNesby said he will likely meet Outlaw later this week or next, and that he is looking forward to her leadership and hopes officers embrace her.

Outlaw is the first African-American woman to lead the department. She made the same history at the Portland Police Bureau, in Oregon, where she where she was in charge of about 1,000 officers for two-and-a half years. Before that, she spent 20 years rising up the ranks on the force in her hometown of Oakland, California.

She has a lot on her plate right away in Philadelphia, with gun violence and the homicide rate topping the agenda.

This year, through the weekend, officials say there were 41 homicides in Philadelphia. Compare that to 36 in Portland all of last year.