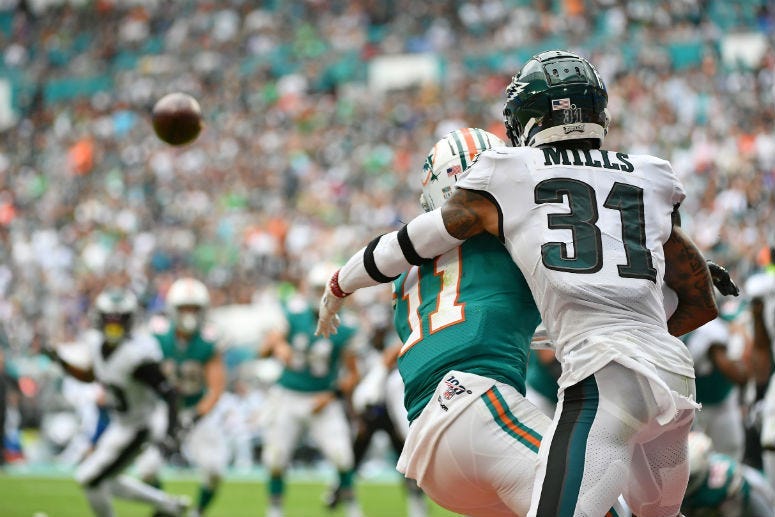 December 20, 2019 12/20/2019 12:47 am
PHILADELPHIA (KYW Newsradio) — Jalen Mills was asked what he told some of his younger teammates who have never experienced a late-season battle for first place with the Cowboys. The Eagles cornerback had a clear explanation.

"I talked to anybody on this team who hasn't played in that game," said Mills. "Your biggest rivalry in college, compare that to this but times it by ten. That's exactly what it's going to be."

On Sunday, the Eagles and Cowboys will meet in South Philadelphia with first place on the line. A Dallas win gives the Cowboys the NFC East title. A win by the Eagles puts Doug Pederson's squad in the driver's seat heading into the final week of the season.

The Eagles and Cowboys haven't met this late in the season with first place on the line since a team led by Chip Kelly captured the NFC East in Texas in 2014. Now, players such as second-year cornerback Avonte Maddox get to experience the Eagles-Cowboys rivalry at a whole new level.

"I think it will be exciting," Maddox said. "I haven't had one of these types (of games). It will be the first time and everyone is saying it's going to be a wild-packed game, so I'm looking forward to it. From the fans, there will be a ton of energy in the stadium."

The fans will indeed bring plenty of energy and could play a part in the outcome. The crowd is expected to make plenty of noise to distract the Dallas offense.

Mills is counting on the 12th man to make a difference.

"It will be electric," said Mills. "It will be exactly what we need as a defense. They're going to be super loud on third down. I think that kind of plays into our favor."

An Eagles-Cowboys game for first place in Week 16 can be intimidating for those who have never experienced such a battle. For Eagles fans, there is no greater disappointment than losing to Dallas, especially at home when the division title is on the line.

One of the players getting his first taste of an all or nothing contest with Dallas is Boston Scott, and the running back says they have been battle tested and will have the right mentality going into Sunday's game.

"We've been in that playoff mindset the last four weeks of win or go home," Scott said. "That's definitely going to be the atmosphere going into this game. We're excited for it. We're going to lock in, stay focused and we're going to do our job."

If the Eagles do their job, they will be one win away (or one more Dallas loss away) from the NFC East crown.

First, they Eagles have to survive the pressure cooker of a Dallas game at home with their season on the line.

Mills needs no reminders about how much this game means. He said he leaned about what is means to the Delaware Valley as soon as he became an Eagle and when he faced the Cowboys for the first time as a rookie.

"I remember the first game we played against the Cowboys," said Mills. "I was like, okay, this is real."