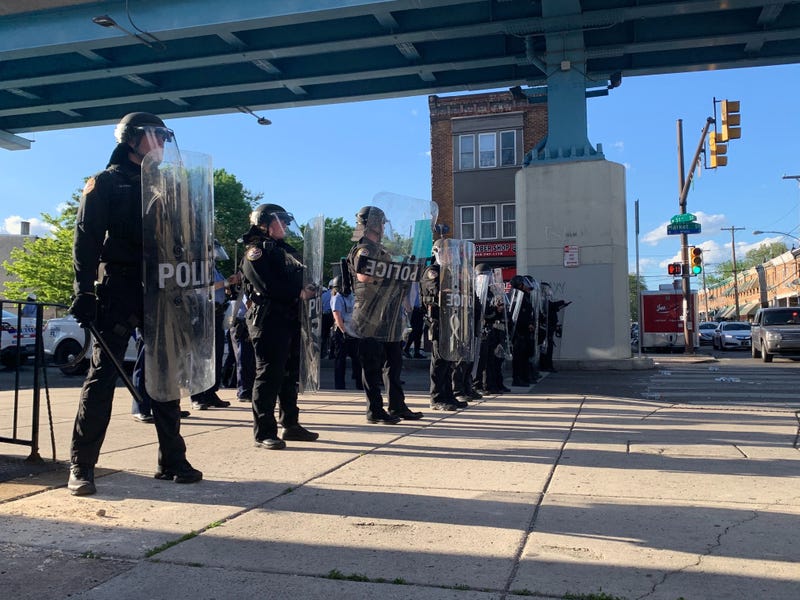 June 1, 2020 06/01/2020 1:58 am
PHILADELPHIA (KYW Newsradio) — Sunday morning was anything but a day of rest for fire crews and police officers, who remained on the scene of chaotic riots from dawn to dusk.

Peaceful protests over the death of Minneapolis black man George Floyd quickly evolved into riots and looting in Center City — namely, the businesses in the shopping district.

Residents volunteered to clean up broken glass and charred remains of debris along Chestnut and Walnut streets Sunday morning.

At 17th and Chestnut, Philadelphians are out cleaning as well. Lisa Glover tells @KYWNewsradio, “I think it shows how strong Philadelphia is, the hate and violence that happened last night will not out power the love and strength we have for our city.” pic.twitter.com/Z0xlQEAAZj

They showed up by the dozens with brooms.

Protests moved to West Philadelphia, were squadrons deployed smoke bombs and tear gas. KYW Newsradio’s Justin Udo was there, coughing through the smoke:

An officer was injured after someone threw a brick through a police car windshield at 52nd and Arch streets.

In west philly where a McDonalds has been vandalized, fire is burning and nearby folks are looting. Police are here- just watching and waiting. @KYWNewsradio #riots #GeorgeFloyd #phillyriots pic.twitter.com/EYbhwiIUhq

Scene at 51st and Market. Police are waiting. Threaten to enforce curfew and hour ago, but standoff with neighbors continues. No one is moving after looting a couple blocks away. @KYWNewsradio #georgefloyd #protests pic.twitter.com/oCaKPLR0jH

SEPTA shut down all modes of transportation Sunday evening, in line with a citywide curfew. The shutdown was a much larger restriction than the transit agency’s previous coronavirus lifeline service.

As KYW Newsradio brand manager Alex Silverman says, essential workers are left scrambling to get to their jobs in the evening.

“How do they exercise their right as an essential worker to get through that barricade?”

As night fell, looters reappeared in clusters across West and North Philadelphia. The majority were believed to be young people, even teenagers — some who don’t even live in Philadelphia.

Looters swarmed places like Family Dollar and a Walmart in Port Richmond.

— Mike DeNardo (@_MikeDeNardo) May 31, 2020
KYW Newsradio’s Kristen Johanson witnessed young children break into a liquor store and neighboring businesses at Broad Street and Allegheny Avenue. One little girl knocked Johanson's phone out of her hand while live on the air.

Broad & Allegheny... total looting and rioting in #North Philly. They are NOT protesters. Phone knocked outta my hand as cars pulled up and people ran out to grab bottles. Seemed almost organized ⁦@KYWNewsradio⁩ pic.twitter.com/9lzjqU6B3J

Several calls to 911 were not received.

Business owners did their best to board up their storefronts, but a resounding yet mum message remained: There’s nothing left to loot.

Pleas to looters by business owners - as fire fighters work to quell a blaze near 60th and chestnut. Hoping that by identifying as #Blackowned they’ll be saved. This night has been hard on #WestPhilly. @KYWNewsradio #riots #GeorgeFloyd #chaos pic.twitter.com/hm4QGPU1ad

The citywide curfew is lifted at 6 a.m. Monday.