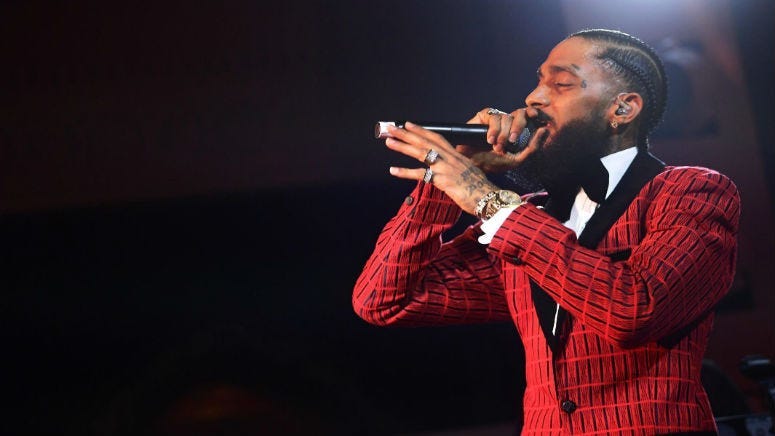 Holder, 29, was also charged at his arraignment with possession of a firearm by a felon.

CNN reached out to an attorney for Holder but has not received an immediate response.

Prosecutors recommended bail be set at $5,000,000, according to a criminal complaint. If convicted of murder, Holder faces between 25 years and life in prison.

He is scheduled to be in court again May 10.

Holder was taken into custody Tuesday after a two-day manhunt following the shooting, in which two other men were wounded.

According to a tweet from Los Angeles police Commander Ruby Flores, Holder was found "with the help of an alert and brave community member."

Los Angeles police Chief Michel Moore told reporters Tuesday morning that Holder and Nipsey knew each other, and the suspect had approached the rapper several times on Sunday.

Holder, 29, used a handgun and "purposely and repeatedly fired" at the men, injuring two of them and killing the rapper, the chief said.

Though the rapper was a member of an arm of the Crips street gang and police believe Holder belongs to a gang as well, Moore declined to specify any gang affiliation and said the dispute between the two does not appear gang-related.

Though Nipsey released several mixtapes independently or through his All Money In record label, his studio debut, "Victory Lap," dropped last year and was nominated for a Grammy.

Police placed restrictions Tuesday on the memorial outside his clothing store, near the site of the shooting. The memorial will close each night at 10 p.m. and people will be told to keep moving and not congregate in front of the many items left in tribute.

This comes after at least 19 people -- most with injuries from being trampled -- were taken to hospitals on Monday night.