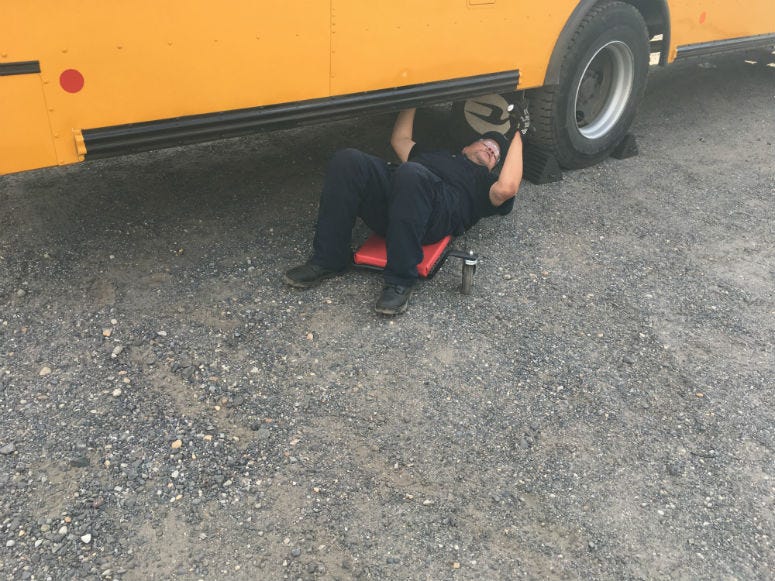 Up to 180 things from the engine block to the back door are checked out, including seat belts. In fact, new buses are now required to have the three point seat restraints in place.

Tom Bednarz, who's in charge of inspections for the state Motor Vehicle Commission, says you’d be surprised how many fail on the first check.

“About 75% of the buses fail inspection,” he told KYW Newsradio as crews were inspecting buses at Hillman’s Bus Service in West Berlin, Camden County. “It gets failed for something as small as a lug nut or the brakes not working or a bald tire.”

Most large fleet companies can do the repairs on site, so there’s no down time.

“Everything really gets done in a timely fashion. So there are no buses on the road that would be considered unsafe," said JoAnn Hillman, who helps run the family owned business.

The whole process is considered one of the most stringent in the country.

If one of them gets a license suspension for any reason, the school district and the bus company get an immediate heads up, and the driver is taken off the road within 24 hours.

Hillman has no problem with the rules in place, although she does have one complaint: Impatient drivers.

“They actually did a survey on a national level and there are approximately 17 million people who pass a school bus with their red lights on while children are exiting a vehicle," she said.

And no amount of maintenance can account for that.