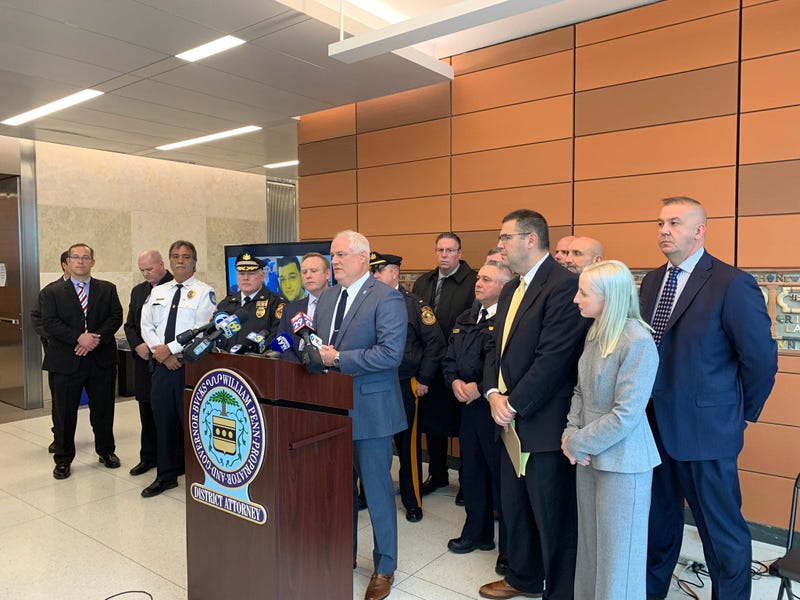 DOYLESTOWN, Pa. (KYW Newsradio) — Monday was supposed to the be the start of the penalty phase for Sean Kratz, with arguments over whether he'd get life in prison or the death penalty. But prosecutors decided to move forward with life in prison.

"This criminal saga is now over," said Bucks County District Attorney Matt Weintraub after Sean Kratz was given life in prison plus 18-36 years.

Weintraub said the decision was based in part on the verdict. Kratz was found guilty of murder for killing Dean Finocchiaro, but two manslaughter convictions in the deaths of Mark Sturgis and Tom Meo meant those deaths would not weigh in as heavily in arguments for the death penalty.

Weintraub also said they heard Kratz on prison phone calls "saying 'I hope I get the death penalty, because then I’ll get the federal defenders, and then I’ll be notorious. And people will know who I am and I’ll go in a blaze of glory and I’ll never be put to death anyway.'"

Weintraub says in conversations with the family there was consensus to skip the death penalty. He quoted Anthony Finocchiaro, Dean's dad: "If we grant the defendant his life, by our grace, he doesn’t get to win."

"And now he doesn't get to be notorious," Weintraub said. "He will forever remain anonymous. He will not be a political martyr for the death penalty argument. He will not become a cause celebre. He will go down in history as an after-thought."

Before Kratz was sentenced, family members talked about the men who were killed. Tom Meo's uncle said Tom will never teach his younger sisters to drive, never comfort them when they have their first break ups.

Mark Sturgis' mom said Mark should be celebrating his 25th birthday this month and blowing out candles with the help of his youngest sister, "who was always adoringly at his side."

As Bucks County Judge Jeffrey Finley handed down a life sentence plus 18-36 years in prison, he told Kratz: "I’ve watched these families, see the pain on their faces … Then you sitting there vacant. You haven’t seen the harm, the pain, the impact your actions caused."