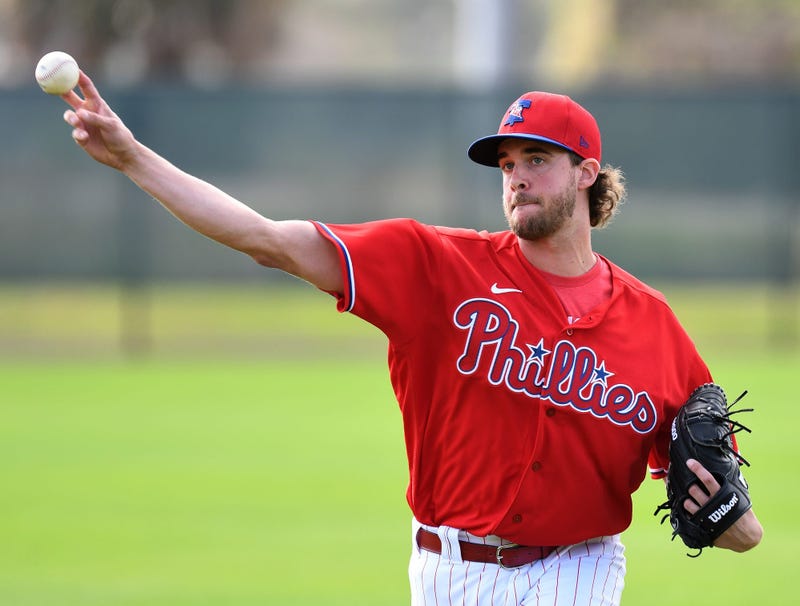 PHILADELPHIA (KYW Newsradio) — Tonight was supposed to be the Phillies’ 50th game of the season. When, or if, baseball starts up this year remains a mystery as MLB and the Major League Baseball Players Association negotiate on many things, including a schedule, safety procedures and money.

NBC Sports Philadelphia reported that if Spring Training 2.0 takes place, the Phillies will likely have theirs in Philadelphia — at Citizens Bank Park and maybe at fields at the Phillies Urban Youth Academy at FDR Park, if necessary.

“The key is to stay in shape,” Nola said. The pitcher has had people to work out with and throw with.

“It’s definitely different,” Nola said. “It’s different for all of us. It’s been a long time since a lot of us been where we grew up at this time of year not playing baseball. It feels like an offseason, which it kinda is right now, like an extended offseason.”

As far as how much time Nola thinks he’ll need to ramp up if the “extended offseason” ends, he said not that much.

“This time right now for us is crucial,” Nola said. “This is the time to ramp up for us, especially pitchers …. We know we’re not gonna go out there and first game we throw we’re gonna throw seven, eight, nine innings because we haven’t really done that, so just to stay healthy is pretty much the main key of all this.”

Nola isn’t sure what the season will look like if baseball is played, but he believes it will happen the way it should and for the right reasons. But, what if there aren’t fans in the stand, at least at the start, which is likely.

“That definitely be weird for sure,” Nola chuckled. “Haven’t played without fans in a very long time. The fans obviously bring out the best in you. They up your game level and we play hard for them. But, yeah it’d be different for sure, but … no matter what you’re there to win when you step on the field.”

While fans likely won’t be able to see Nola up close and in person until further notice, there are ways they can interact with him and meet him in the future.

Nola and Yuengling teamed up to start “Cheers PA,” a fundraiser that runs through June 19 to benefit the Hospitality Assistance Response of Pennsylvania, also known as HARP, so help can be provided towards hospitality workers, bartenders and waitstaff in Pennsylvania impacted by COVID-19.

Nola said he launched this virtual fundraiser, “to help bar and restaurant workers around Pennsylvania that who lost their jobs during this pandemic, during this COVID-19 virus and we wanna do something good for them. This is a weird time around our world and we don’t know when there’s a vaccine that’s gonna come. We don’t when this is gonna stop, so we wanted to get something done sooner than later, something good for the community.”

People can donate at Pledge It or Cameo, and when they do, they can enter to win prizes, including signed memorabilia from Nola, Bryce Harper, Rhys Hoskins, Andrew McCutchen, Scott Kingery, Carson Wentz and Zach Ertz. They can possibly win a Zoom happy hour appearance from Nola, have him visit your Little League Team or receive a pitching clinic from him.

“They can ask whatever questions they want,” Nola said of whoever wins the pitching clinic prize. “I’ll give them some pitching tips and some mental tips, how I handle things on the mound, in the weight room during my pre-start days, in between, give them a rundown of my routine and what I do and just to give them tips—whatever they want to know. And just to have fun out there. Have a good little pitching clinic. I’ve done a couple of them and they’re pretty fun. Just to get to know the people that are out there and just to get to mingle with them and form a relationship.”

Other prizes include a pre-game dinner for four with Phillies icon Larry Bowa, two meet-and-greet tickets to the next Roots Pinic or a three-night stay in Las Vegas.