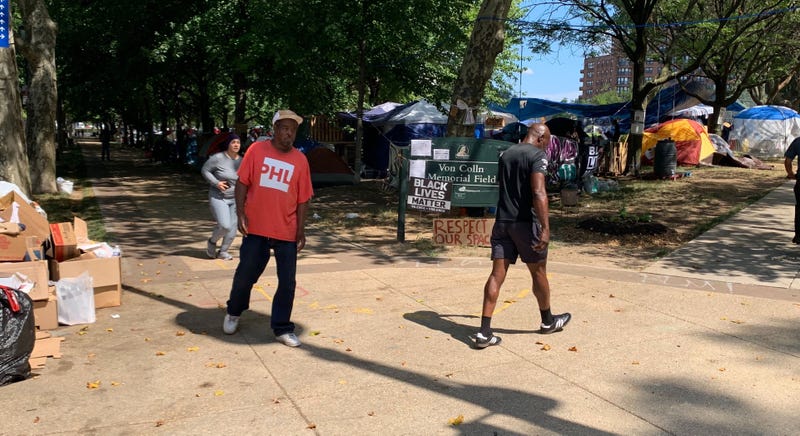 PHILADELPHIA (KYW Newsradio) — Philadelphia officials say they have posted a notice of closure at an encampment on the Benjamin Franklin Parkway that’s protesting the lack of affordable housing, after weeks of negotiations with the organizers fell apart.

“If it happens, it’s going to be with force and brutality because people don’t have anywhere to go,” said the spokesperson, Jennifer Bennetch.

Officials declined to say what they will do if the camp is still occupied next Friday.

Deputy Managing Director Eva Gladstein maintained optimism that the residents could be coaxed into one of the options the city is offering, which include COVID-19 beds for those in high-risk groups, treatment beds for people suffering from addiction, or shelter beds, along with services and permanent housing plans for everyone.

Gladstein said the encampment, on a community athletic field, is not safe or healthy for people living there.

“We will be out there with intensive services offered next Wednesday and Thursday,” she said, “offering housing and health services and we hope through that engagement people will be connected to housing or any other services they might need.”

“The options are not housing and they don’t lead to permanent housing,” she said. “Most of these programs are programs people have already left. They’re the same programs that have been insufficient.”

The encampment went up on June 10, after nearly two weeks of civil unrest over racism and police brutality, as a protest of the lack of affordable housing.

It was small at first, but organizers invited homeless people to occupy the site and it swelled to an estimated 200 people.

City officials say the organizers are not homeless — they go home at night to sleep and return in the morning — but they offered hope and community to people with real needs.

“We agree with them,” said Gladstein. “This is really an urgent issue and I think they’ve been successful in raising awareness more broadly about the urgency of the issue. This is something we work on every day but it’s not just the city, it’s the state and federal government that need to participate in this effort. We’re working right now on a tiny house village and expanding other permanent housing resources, but it’s not as simple as asking for it and it being created.”

Hersh added that she hopes the organizers stay involved after the encampment closes.

“One reason we’re so disappointed that we haven’t been able to make more progress and engage more fully with them is that we really appreciate and respect the leadership and the advocacy that their efforts represent,” Hersh said. “We need more voices like theirs in it and in it for the long haul to do the hard work. It takes time and dedication and what we still hope comes out of it is doing the really hard work of creating the political will to get the resources we need, not just locally but at the state and federal level.”

She said an outreach worker was struck while working with homeless people in the encampment Thursday.

Bennetch said organizers didn’t want outreach workers in the encampment because they feared it was a step toward eviction and they were trying to protect the camp.

If the city succeeds in closing the camp, Bennetch suggested a new one might arise elsewhere.

“These are living breathing human beings and they’re not going to just disappear,” said Bennetch, “so if anyone is bothered by that, they need to pressure their officials to come up with permanent solutions.”