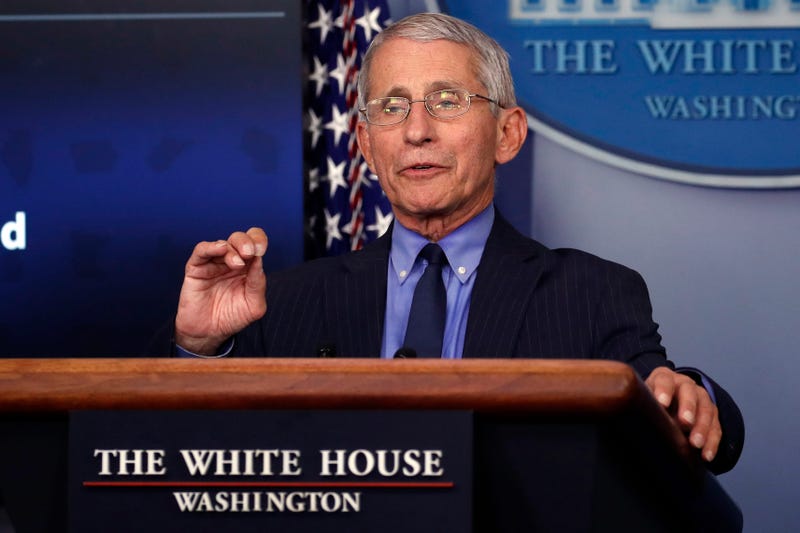 PHILADELPHIA (KYW Newsradio) — Dr. Anthony Fauci, the government's top infectious disease expert, says he's "cautiously optimistic" that a coronavirus vaccine may be ready by the end of the year.Fauci, the director of the National Institute of Allergy and Infectious Diseases, was among four top U.S. health officials who testified before a U.S. House committee on Capitol Hill on Tuesday morning about the Trump administration’s response to the coronavirus pandemic.

He said it's a matter if when, not if, scientiests develop a COVID-19 vaccine.

In their prepared remarks, which were made available by the House Committee on Energy and Commerce, Fauci, CDC Director Dr. Robert Redfield, FDA Commissioner Dr. Stephen Hahn and Assistant Secretary of Health with the Department of Health and Human Services Admiral Brett Giroir, said the pandemic is far from over and suggested it could get messier and more complicated during the coming flu season.

Their testimony before the Democrat-led committee comes as a variety of scenarios play out in the country. In the Philadelphia area, for example, where restrictions have been in place longer, infection rates and hospitalizations are way down from their peak during the pandemic.

In the same time, hot spots are emerging in other states, as Fauci acknowledged last week in an interview with CBS News.

Since Fauci's last appearance at a high-profile Senate hearing more than a month ago, the U.S. is emerging from weeks of stay-at-home orders and business shutdowns. But it's being done in an uneven way, with some states far less cautious than others.

Last week, Vice President Mike Pence published an opinion article in The Wall Street Journal saying the administration's efforts have strengthened the nation's ability to counter the virus and should be “a cause for celebration.”

Then President Donald Trump said at his weekend rally in Tulsa that he had asked administration officials to slow down testing, because too many positive cases are turning up. Many rally goers did not wear masks, and for some that was an act of defiance against what they see as government intrusion. White House officials later tried to walk back Trump's comment on testing, suggesting it wasn't meant to be taken literally.

Fauci has recently warned that the U.S. is still in the first wave of the pandemic and has continued to urge the American public to practice social distancing. And, in a recent ABC News interview, he said political demonstrations such as protests against racial injustice are “risky” to all involved.

Asked if that applied to Trump rallies, he said it did.

Fauci says there seems to be an anti-science sentiment leading some to ignore advice from public health and political leaders.

In the remarks, prepared by the National Institute of Allergy and Infectious Diseases: “The rigorous clinical testing required to establish vaccine safety and efficacy means that it might take some time for a licensed SARS-CoV-2 vaccine to be available to the general public.”

Fauci and the rest will be testifying in person, much different from their remote testimony before a Senate committee in May.

About 2.3 million Americans have been sickened in the pandemic, and some 120,000 have died, according to data from Johns Hopkins University.