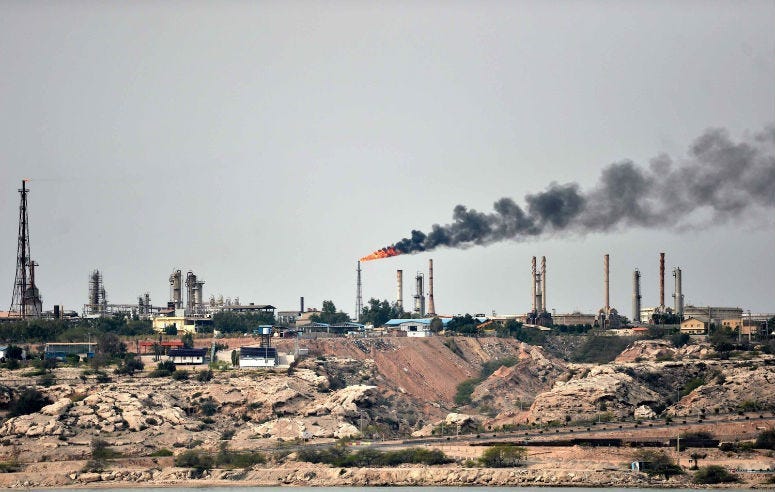 By Matt Egan, CNN Business
(CNN) -- US oil prices raced above $65 a barrel on Monday for the first time since Halloween after the White House pledged to deepen its crackdown on Iran.

The Trump administration vowed to bring Iran's oil exports to "zero" by removing the waivers that previously allowed some countries to buy crude from the OPEC nation.

The escalation adds to mounting supply concerns in the oil market. Venezuela's oil shipments have been wiped out by US sanctions. Violence is rocking Libya. And Saudi Arabia has slashed its output.

"The market will be under pressure and the prices will definitely react upward," said Iman Nasseri, managing director for the Middle East at consulting firm Facts Global Energy.

President Donald Trump promised in a tweet that "Saudi Arabia and others in OPEC will more than make up" the difference.

The oil market, however, signaled skepticism.

Oil is up 54% since Christmas Eve lows

US oil prices climbed nearly 3% on Monday to $65.90 a barrel. That represents a spike of 55% since prices closed at $42.53 a barrel on Christmas Eve. Brent crude, the global benchmark, surged 3.4% on Monday and touched $74 for the first time since early November.

Gasoline prices, meanwhile, continued to climb. The national average hit $2.84 a gallon on Monday, up from $2.61 a month ago, according to AAA.

"It's a bit of a conundrum," said Matt Smith, director of commodity research at ClipperData, an energy research firm. "We know President Trump wants to keep gasoline prices in check. But oil prices are gaining and that will only drag that retail gasoline price higher."

Trump first announced sanctions on Iran a year ago. Oil prices initially shot higher due to fears about the loss of supply from Iran, which was then the world's fifth-biggest producer of crude. Saudi Arabia responded by ramping up production to all-time highs.

However, the US administration, fearing an oil shock that would cripple the economy, granted waivers to China, India and six other nations. The softer-than-expected approach left oil markets oversupplied, contributing tolast fall's bear market in crude.

The White House announced on Monday that Trump decided he will not reissue the Iran waivers when they expire in early May. The move is aimed at blocking the Iranian regime from its No. 1 source of cash.

"We're going to zero, across the board," US Secretary of State Mike Pompeo said during a press conference.

Iran exported about 1.4 million barrels of crude a day in March, down by half from pre-sanctions levels, according to the International Energy Agency. And Iran's output is sitting at its lowest level in nearly six years, the IEA said.

However, China, Japan, Korea and Turkey have imported more oil from Iran than their waivers allowed them to, the IEA said.

"It's hard to see the exports go to zero. But you may roughly lose about half of it," said Matt Sallee, portfolio manager at energy investment firm Tortoise. He said China is unlikely to completely cease imports from Iran.

The good news for American drivers is that the United States is pumping more oil than ever before. In fact, America is now the world's leading oil producer.

That domestic production, which is expected to keep rising, provides a cushion against the situations in Iran and Venezuela.

"The United States is now a significant producer," Pompeo said on Monday.

However, not all crude is created equally. US shale oil is much lighter than the heavy barrels knocked offline in Iran and Venezuela. US Gulf Coast refineries are configured to run on a healthy dose of heavy crude. A shortage of those heavy barrels would make it difficult for refiners to produce as much gasoline, diesel and jet fuel as America's economy requires.

The Trump administration announced on Monday that the United States, Saudi Arabia and the United Arab Emirates are "committed to ensuring that global oil markets remain adequately supplied."

"We have agreed to take timely action to assure that global demand is met," the White House said in a statement.

However, no specifics were announced. Pompeo declined to go into details on any such agreement.

Khalid al-Falih, Saudi Arabia's energy minister, said in a separate statement that the kingdom will coordinate with other oil producers "to ensure the availability of enough oil supplies for consumers and to ensure global oil markets are not knocked off balance."

The end of the OPEC deal?

If Saudi Arabia wants to help, it would have to reverse its own recent moves.

Facing a collapse in oil prices, OPEC and its allies agreed in December to slash production. Saudi Arabia, OPEC's de facto leader, delivered the brunt of the output cuts.

Nasseri, the analyst from Facts Global Energy, said that Saudi Arabia and the UAE could potentially replace up to 1 million barrels per day lost because of the crackdown on Iran.

However, such a move would eat into the ability of Saudi Arabia and the UAE to respond to future supply shocks.

"They will end up having very little spare capacity left for any other emergency or any other crisis in the oil market," Nasseri said.

US imports from Venezuela have plunged to zero because of the sanctions Trump imposed earlier this year on PDVSA, the Latin American nation's state-owned oil company.

OPEC and its allies will need to decide next steps when they meet in Vienna in June.

"They will have a very tough OPEC meeting," Nasseri said. "That may be the end of the OPEC-plus agreement in its current format."