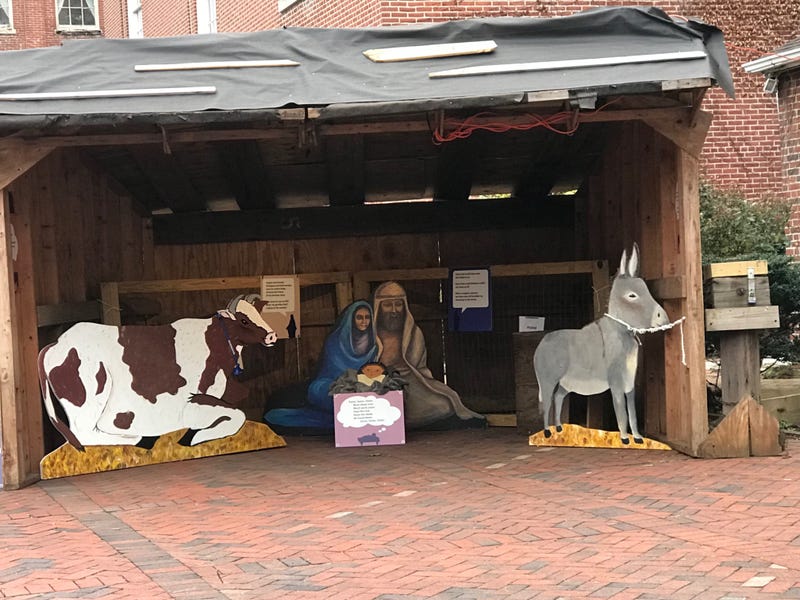 December 14, 2019 12/14/2019 1:16 am
PHILADELPHIA (KYW Newsradio) — A church in Old City known for its outdoor Nativity displays keeps it simple this year after the escape of a cow two Christmases ago.

Old First Reformed United Church of Christ at Fourth and Race streets has a Nativity display in its courtyard. This year, painted plywood figures of the Holy family and the barnyard animals, including a cow, are on display, and messages of reflection are posted.

"When you look around at all of the light shows and all of those kinds of signs of Christmas, there is often none of the religious story. We're a church, we think we can appropriately present the religious story that started it all," said Rev. Michael Caine, pastor of the church.

For decades, the church was known for it's live nativity displays, that was stopped last year after a cow named Stormy escaped from the pen and made its way up to I-95 two years ago.

The cow was safely caught, but there was a public outcry against using animals as entertainment, and the use of live animals was stopped.

An Old City Church is MOOOving away from a Christmas time tradition...opting for a simpler one. Stormy the cow has been replaced by Flat Stormy this year. Hear the story on @KYWNewsradio 5PM #ReportersRoundup pic.twitter.com/T9cIgfh6lv

A silhouette of the Holy family in a refugee tent was on display last year.

The only live animal used this year will be a donkey on Christmas Eve. Congregants dressed as Mary and Joseph will go around the neighborhood, asking if there is room at the inn. The rest of the story will be played out outside the church.