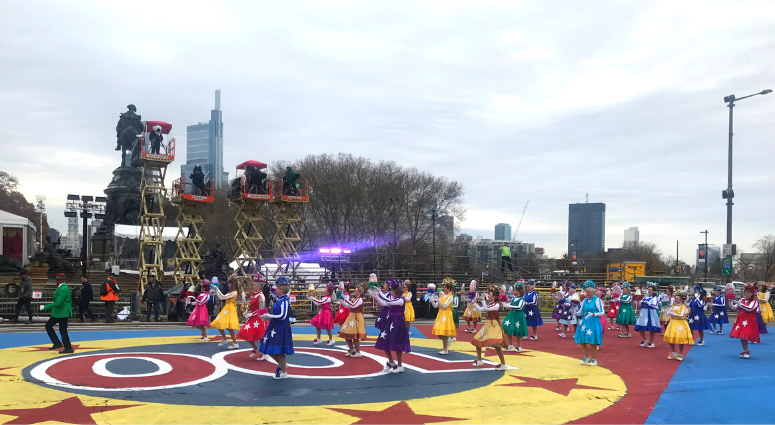 Although this particular parade has been a couple years in the making, they won’t make a final decision whether or not to fly the balloons until the morning of.

Todd Marcocci, co-producer for the parade, said they worked for two years to get special groups to the parade, like the Blazen Divaz from Idaho and the Lancerettes from Ohio.

“Any of these special entities this year, and also key marching bands,” he added. “We started that over two years ago because those were special invitations to be a part of this parade.”

The predicted winds remain a concern, particularly when it comes to the giant balloons like Underdog, or the new birthday cake balloon celebrating the parade’s 100th.

In addition to marching bands, choirs and dancers from around the country, parade supervising producer John Best said there is a long list of celebrity guests, too.

“Macy Gray, Aloe Blacc, Il Divo — so we are really, really thrilled to bring this to the people of Philadelphia,” he said.

Parade organizers are promising a bunch of surprises for the televised parade, but they're keeping them under wraps.

"I grew up in the Lehigh Valley so I’ve watched this parade since I was a little kid, and now I finally get to be a part of it," he enthused.

The founding Fab Five member and new gift-wrapping guru is prepared to brace the elements, if need be.

“I'll bring extra toupee tape and I think I'll be fine,” he joked.

Kressley’s excited to meet Gritty, too, even though he’s not totally up to snuff on the Philly sports scene.

“I've seen him, he kind of looks like a Muppet. I don't follow baseball but I do know who the Flyers mascot is,” he said.

Well, at least he matched Gritty with the right team.

The parade kicks off at 8:15 a.m. along the Benjamin Franklin Parkway. Wind gusts are expected to reach 40 to 50 mph.

After the parade, Kressley said he’s headed to his family farm in Lehigh Valley for a Thanksgiving feast.