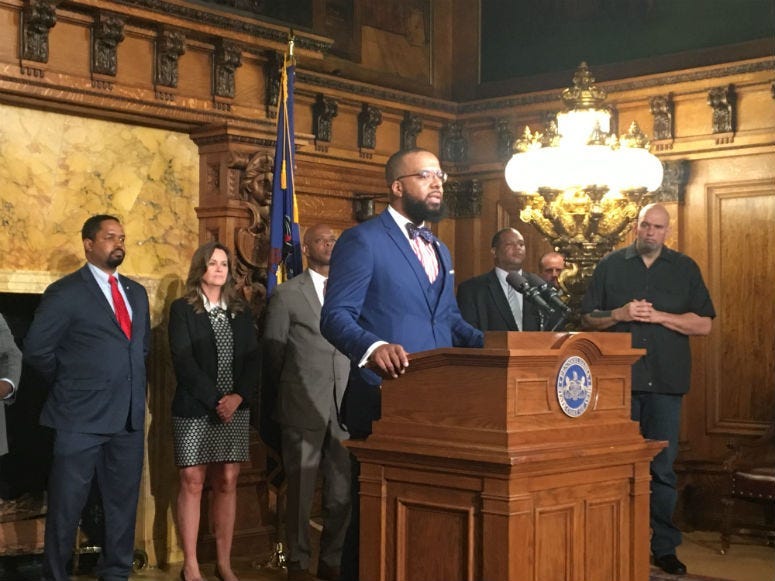 HARRISBURG (KYW Newsradio) — Pennsylvania's lieutenant governor appointed Brandon Flood, a political insider in Harrisburg and a former inmate, to be new secretary of the Board of Pardons.

"Many of you are just now learning about my criminal past, and I was deliberate in doing that," Brandon J. Flood, the new secretary of the Board of Pardons said, as he addressed the press and members of the Pennsylvania Legislature on Monday at the Capitol in Harrisburg.

He stood alongside a bipartisan group of lawmakers, who have joined forces to make comprehensive criminal justice reform a reality in Pennsylvania. He spoke to the lawmakers, but also those stuck in the justice system.

"Through me, not only do you have an advocate who intimately understands the clemency process firsthand, not only from a policy standpoint but also as an applicant," he said, "you have someone who understands what it's like to bear the burden of a scarlet letter on your sleeve."

Flood has held several government positions in Harrisburg, including as a policy and reporting specialist in the state’s Department of General Services and executive director of the Pennsylvania Legislative Black Caucus of the Pennsylvania House of Representatives. But before his time in government, also in the office of Pennsylvania lawmakers, he spent a total of nine years in prison over two sentences.

Flood, who is 36-years-old, was convicted of possession with intent to deliver cocaine at age 17 and for a firearms violation at age 22. During his second stint in prison at SCI Chester, Flood rehabilitated his life. He participated in programming by Temple University, moderated events on criminal justice reform and built a name for himself as a public speaker.

When he was released, an internship at the state House of Representatives helped him build connections. Eventually, Flood applied for clemency. The tedious process took three years, with Gov. Tom Wolf finally granting the request earlier this year.

The effort gave Flood an inside look at what it's like to apply for clemency and the various areas in need of reform.

"It literally cost me $1,500 to get my record expunged. For some folks, that's cost prohibitive," says Flood.

As is the new secretary of the five member Board of Pardons, Flood will oversee the pardons office, as well the meetings of the Board. His position is a non-voting one, but Flood will be responsible for processing all clemency applications, securing background checks for applicants and providing the information to the Board.

"The integrity process of the clemency process will not be compromised diminished in any way," he said. "We will continue to not only consider the impact on victims, but also live up to the restorative justice model."

Currently, clemency applications cannot be submitted online, and those who receive pardons must take the additional step of applying for expungements. All applications, whether seeking pardons for minor or major convictions, are processed in the same way.

Some of these processes can be changed by vote of the Board of Pardons, others may require legislative intervention.

"We have to streamline the process. And I think Brandon, especially because of his life experiences, makes him uniquely qualified for that role," Lt. Gov. John Fetterman said on Monday.

Fetterman said he decided to appoint Flood because pardons are the only remedy available for thousands of Pennsylvanians who are languishing in prison because of excessive sentences.

He says he hopes reforms will make the process more accessible.

"The process is daunting, there's bottlenecks, there's so many different processing involved," said Fetterman, "and what better example of a second chance than somebody who has taken that very same path and received that second chance."

Members of the bipartisan Criminal Justice Reform Caucus from both the Pennsylvania House of Representatives and the Pennsylvania Senate attended the press conference, applauding Flood's appointment.

"We need to do that for them. They have been through a lot to get the pardon done," said Sen. Camera Bartolotta.

"This is a great day for all of those who believe in criminal justice reform," said Rep. Jordan Harris.

For more on the Board of Pardons, click here.