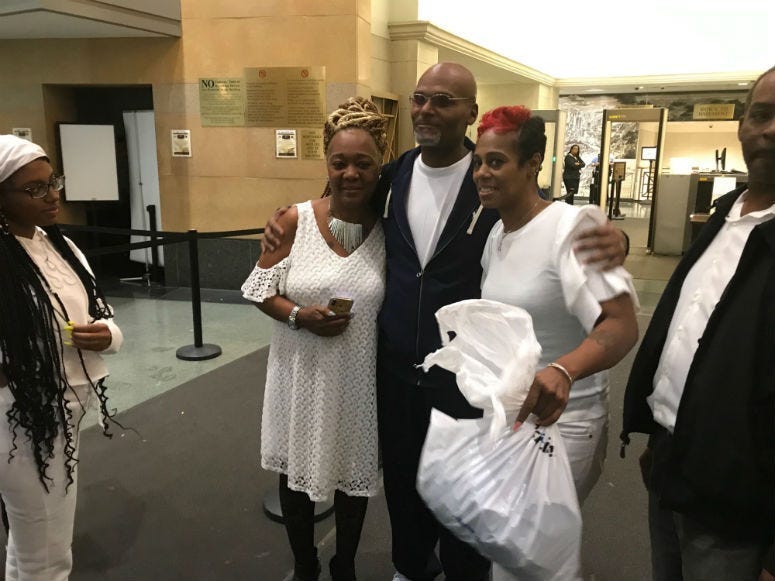 PHILADELPHIA (KYW Newsradio) — The Pennsylvania Innocence Project, which has helped 17 wrongfully convicted people find freedom, will celebrate its 10th anniversary Wednesday night at a gala at the National Constitution Center.

Prior to 2009, if you were wrongfully convicted in Pennsylvania, you had only a few avenues for relief: Represent yourself in court or hire a lawyer on your own dime, hope a generous advocate donates his or her time, or hope that an investigative reporter takes to your cases.

But for the most part, the innocent stayed in prison. That is, until two Philadelphia lawyers, David Richman and David Rudovsky, got together to change things.

Innocence Projects in places like New York were making a difference, and the hope was that the Commonwealth could offer similar relief. So, thanks to a one-time gift from Gerry and Marguerite Lenfest and donated space from Temple University, the Pennsylvania Innocence Project was born.

"The cases are very labor intensive," said Feyler, "yet we only have a staff of three lawyers."

Innocence Project saves money by working with interns — an estimated 1,300 in 10 years — plus legions of volunteer attorneys from law firms across the commonwealth.

The cases take legal analysis, investigation of facts, interviews with witnesses and more. It also takes time — anywhere from seven to 13 years to gain exoneration.

"It's easy to get into jail, but it's hard to get out," said Sher. "I can't imagine doing one night in prison for a crime I did not commit."

So far, the Pennsylvania Innocence Project exonerated 17 people under Marisa Bluestine, the founding executive director of the project.

"They've served a total of 395 years in prison, of lost years," added Feyler.

The names of the wrongfully convicted may be familiar: Eugene Gilyard, Kenneth Granger, Chester Hollman III, Donte Rollins, Shaurn Thomas and so many others.

Innocence Project's most recent victory took place this month when Willie Veasy, who spent 25 years behind bars for a murder he did not commit, walked free.

A jury convicted Veasy based on the testimony of a single eyewitness and a false confession, despite solid alibi evidence. Earlier this month, the Philadelphia District Attorney's Office won its motion for a new trial in the case after presenting evidence that the detectives in Veasy's case used coercion to get the confession.

According to data from the Quattrone Center for the Fair Administration of Justice at University of Pennsylvania, anywhere from two to eight percent of all cases return a wrongful result. So Wednesday night, PIP's exonerees, staff, volunteer lawyers and many supporters will celebrate a decade of hard work in the justice business.