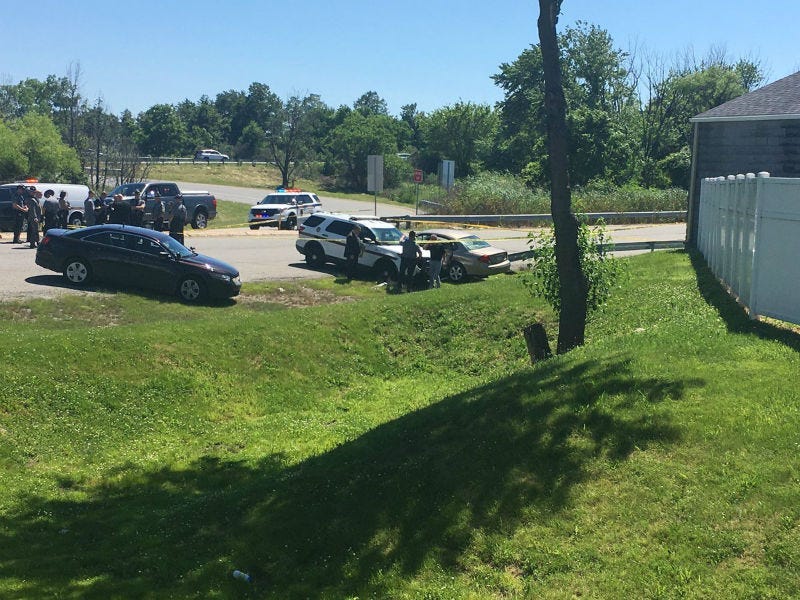 June 11, 2019 06/11/2019 11:21 pm
PHILADELPHIA (KYW Newsradio) — A man wanted for a probation violation is under arrest after leading state police on a chase near I-95 in Chester Tuesday afternoon. It all ended with the suspect being shot by a state trooper at the Highland Avenue ramp.

In a statement, authorities say a state trooper tried to initiate a traffic stop on a 2002 Ford sedan on I-95 southbound. When the vehicle didn't stop, a pursuit ensued. Authorities say that when the sedan got off the highway at Exit 3, the car went over the median and tried to make a U-turn. The trooper then used his vehicle to stop the sedan from going back onto the highway.

Both cars came to a rest, and the trooper "discharged his weapon, striking the suspect in the lower leg," authorities said.

At the scene, there was no sign of the male suspect whom an eyewitness said was taken out the car in handcuffs and put in an ambulance. Authorities said that the suspect was taken to the nearby Crozer Chester Medical Center.

The trooper was also not on the scene, taken away for a debriefing by investigators.

Videographer at scene captures image of bullet hole in windshield of sedan. Troopers not confirming any details at this point. Awaiting a briefing here. No timetable for that. Meanwhile ramps remain closed at start of rush hour.@KYWNewsradio pic.twitter.com/UtBWqo205J

Evidence technicians spent hours going over both vehicles before pulling the trooper's vehicle away.

It exposed the damage to the left rear passenger's door behind the driver's door, possibly from a collision involving the vehicles. And investigators using metal detectors searched for evidence underneath the car.

Finally, a wrecker arrived and the state police SUV was put on the top of the flat bed and the suspect's damaged vehicle was hooked and pulled from behind.

As plain clothes state police supervisors left the scene, they had nothing to say about the incident. Asked how the trooper and the suspect were doing, the investigator simply said, "everybody's okay."

State police were also involved in a car chase on I-95 south, which ran into Delaware where the driver of a 2006 Chevrolet truck crashed on Governor Printz Boulevard.

Officials say the driver will be charged for fleeing and eluding police.