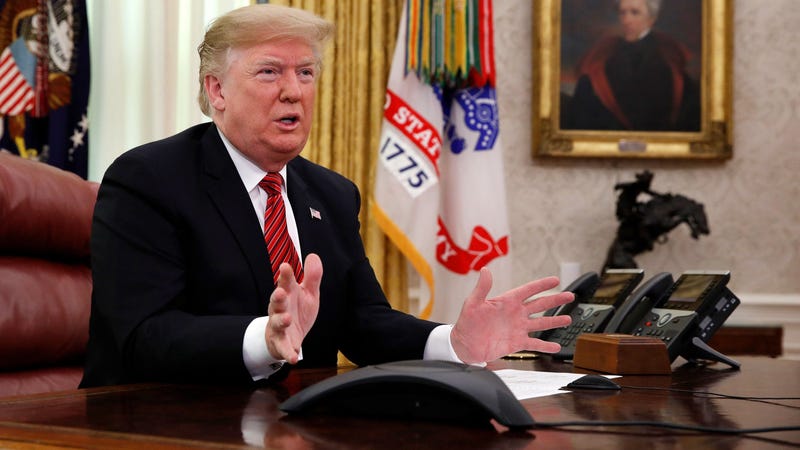 January 2, 2019 01/02/2019 9:04 pm
By Jake Tapper, Anchor and Chief Washington Correspondent
(CNN) — Pentagon officials told President Donald Trump that his order to withdraw troops from Syria within 30 days was physically impossible without significant risk to U.S. forces, multiple informed sources tell CNN, and the new 120-day timeline is not an example of anything but reality, logistics, and physics.

Despite this fact, Trump administration officials are casting the new timeline as a slowdown and an example of the president being reasonable after hearing pushback from the Pentagon and allies such as Sen. Lindsey Graham, R-South Carolina.

"I said, 'You know, I never said that I'm going to rush out,' " the president told Fox News Channel in an interview that ran on Monday.

The President will make sure any withdrawal from Syria will be done in a fashion to ensure:1) ISIS is permanently destroyed.2) Iran doesn’t fill in the back end, and3) our Kurdish allies are protected.

Administration officials told reporters that the president was now granting the military several months for the withdrawal while Graham told journalists Sunday, "I think we're slowing things down in a smart way ... I think we're in a pause situation where we are re-evaluating what's the best way to achieve the president's objective of having people pay more and do more."

In truth, the sources say, the 120-day timeline that's being reported as a slowdown is not a slowdown in any way, it's the minimal timeline the military needs to even execute the abrupt and sudden order in a safe and orderly manner.

The 120-day timeline is the military "trying to please the president and not get everyone killed," one Pentagon official told CNN. "They should probably take longer if you ask me."

The reality behind the schedule is just the latest example of administration officials reeling from a decision they believe to be a potentially devastating mistake, one that provoked a more negative response than the president had anticipated, including the resignations of his widely respected secretary of defense, retired Marine Gen. James Mattis, and the special presidential envoy for the campaign to defeat ISIS, Brett McGurk.

These sources, who would only speak on background so as to avoid the ire of the president and/or avoid further administration chaos, note that Trump's original decision was impulsive. On a phone call with Turkish Prime Minister Recep Tayyip Erdogan, the president suddenly said the U.S. would get out of Syria as soon as possible and then refused to reconsider when pressed to do so by advisers.

Pentagon officials came back and told him it was impossible to withdraw in fewer than 120 days, the sources say. The president then accepted 120 days but took to Twitter to say the troops were "slowly" being sent back home.

"The minimum period required to execute this reckless decision is now being portrayed as 'well thought out and deliberate' when it's neither of those things," an informed source tells CNN. "It's a total capitulation to Erdogan and an abandonment of the very fighters in Syria who are fighting ISIS and protecting U.S. forces. The military simply cannot get out safely in less than 120 days."

If anybody but Donald Trump did what I did in Syria, which was an ISIS loaded mess when I became President, they would be a national hero. ISIS is mostly gone, we’re slowly sending our troops back home to be with their families, while at the same time fighting ISIS remnants......

...I campaigned on getting out of Syria and other places. Now when I start getting out the Fake News Media, or some failed Generals who were unable to do the job before I arrived, like to complain about me & my tactics, which are working. Just doing what I said I was going to do!

Pentagon officials describe the withdrawal timeline as being 50 percent logistics and 50 percent security. The physical removal of service members from start to finish would only take about a month, but more time is needed to move equipment out of the theater and coordinate airlifts.

One source referred to the heavy amount of ordnance and ammunition the U.S. has in Syria that cannot just be left behind, nor can it be moved quickly.

Beyond the facts behind the order, military and intelligence officials continue to try to impress upon the president their view that the decision to withdraw will have dire consequences including causing a resurgence of ISIS.

Some officials have asked about the historical precedent for a declaration of victory and if a withdrawal like this has ever worked.

One outstanding item, of many: the Global Coalition to Defeat ISIS next meets in the coming weeks at the State Department, hosted by Secretary of State Mike Pompeo. He will no doubt face some tough questions from representatives of the 73 other member countries and five institutions such as the European Union and NATO, including explaining how the U.S. made such a dramatic decision without any serious input from allies and against the assessment of intelligence agencies.

It's not just partners who are worried. Officials at the Department of Homeland Security, a senior administration official tells CNN, are extremely concerned that the decision could give ISIS free reign to reconstitute and are alarmed about the impact it will have in the medium term on homeland security.

Administration officials are likewise skeptical that Erdogan and the Turkish military have the will or the ability to defeat whatever remains of ISIS. They add that Erdogan's real objective is to fight the very Kurds who have been fighting ISIS alongside American forces.

"Trump says the United States has been suckered for too long, but in this case Trump was suckered by Erdogan," the source, familiar with the deliberations told CNN. "He signed up to a program against the interests of the United States that nobody in his own military believes advisable or implementable."

"There's some very stupid stuff going on and it's a lie to say there is a plan of any kind," the source tells CNN. "There is no plan."