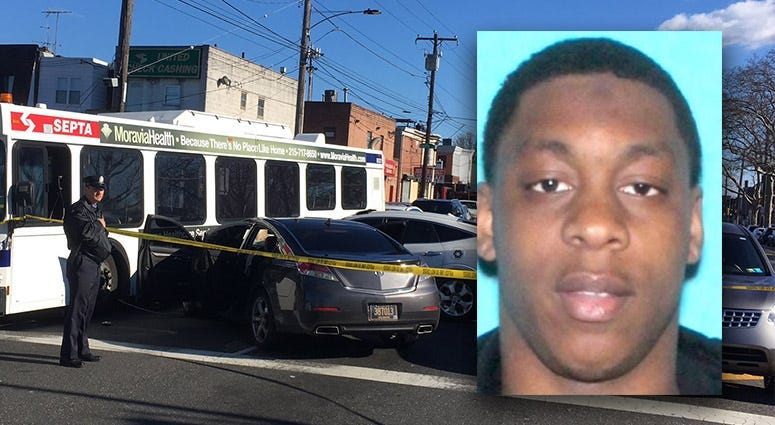 PHILADELPHIA (KYW Newsradio) — Police in South Philadelphia are hunting for the person of interest in at least two murders in Delaware. He slipped away after a pursuit with police that led to two crashes — one on I-95 near the airport, which left three officers hurt. He is still at large, believed to be on foot.
Philadelphia police say 20-year-old Dejuan Robinson is considered armed and dangerous. Police pursued him due to a parole violation for firearms.

This male is wanted for multiple homicides in the state of Delaware. He is believed to be in South Philadelphia in the area of Broad and Oregon, and is armed and dangerous. Details to follow. pic.twitter.com/eH3HQA7ugI

The Wilmington Police Department said officers were attempting to stop Robinson around 11 a.m. Wednesday in the area of East 12th Street and Rosemont Avenue in Wilmington. Robinson refused to stop, and he led the officers on a pursuit northbound on I-495.

While traveling north on I-95, between Philadelphia International Airport and the Girard Point Bridge, Robinson's vehicle rammed another motorist, which caused a collision with Wilmington officers and a Pennsylvania state cruiser.

Two Wilmington officers and a Pennsylvania state trooper are being treated at a Philadelphia hospital for nonlife-threatening injuries. They are expected to be released soon.

Three other Wilmington officers were not injured, but they are being checked out at Christiana Hospital in Newark, Delaware. The condition of the other motorist is unknown.

#TrafficAlAll Lanes of I-95 northbound is CLOSED at the Airport (Exit-13) due to an accident investigation, Use the Platt Bridge as an alternate pic.twitter.com/eSGE3D9eS1

After the initial accident, Robinson took off and later hit a SEPTA bus near the intersection of Broad Street and Oregon Avenue. He bailed from the vehicle and ran on foot. His whereabouts are unknown.

State troopers and Philadelphia police officers have surrounded the area, and SEPTA officials have also been alerted.

As @PhillyPolice hunt Delaware murder suspect Dejuan Robinson, South Philly High and 3 elementary schools are locked down. He bailed at Broad & Oregon, after slamming into a Septa bus pic.twitter.com/gPQGcebmAr

Several South Philadelphia schools were placed on lockdown during the manhunt: Jenks, Fell and Bregy elementary schools, as well as South Philly High School. The schools staggered dismissal times in the afternoon, each assisted by police.

As far as police know, he is still on foot.

"We have not observed him entering another vehicle," he added. "We are still investigating how he got into the Acura" — the car Robinson drove in the police chase. "That could have been a crime; we don't know."

Robinson served prison time from 2015 to 2017 after pleading guilty to a gun charge and gang-related activity.

He's escaped the law in the past. Four years ago, he kicked out the window of a juvenile correction van in Wilmington and jumped out while it was moving.