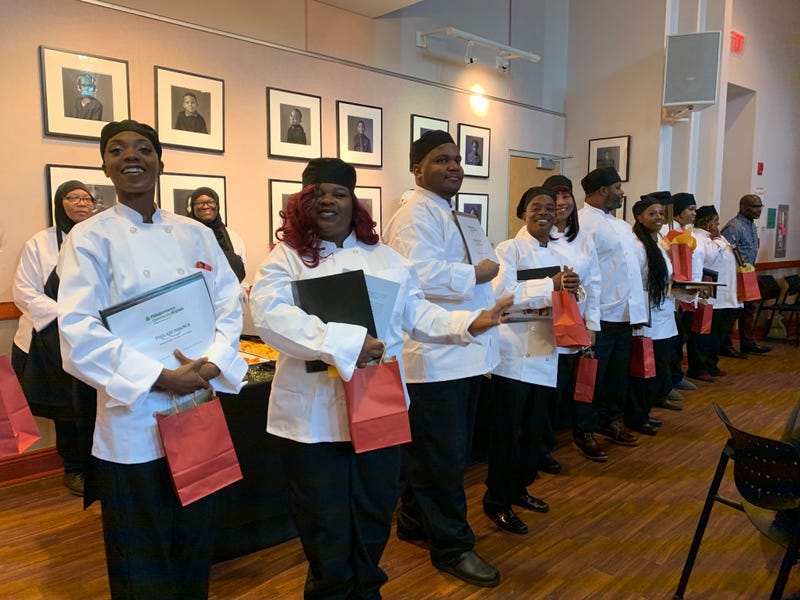 October 20, 2019 10/20/2019 3:54 pm
PHILADELPHIA (KYW Newsradio) — Philabundance sent their newest graduating class out into the world from a program that helps people go from poverty or homelessness to employment.

Almeada Lindsay was one of 16 graduates of the most recent Philabundance Community Kitchen vocational program. She had nothing but compliments.

"This program is the best," Lindsay said. "They just see something in everybody and they try their best to bring it out."

Department of Human Services Secretary Teresa Miller attended the graduation at the Honickman Learning Center. She said public officials need to do better about creating a safety net and offering help.

"There are lots of reasons that people experience poverty," said Miller, "and oftentimes, people have inter-generational poverty."

Deseree Neal with Philabundance Community Kitchen said that's why they take the whole person into consideration when teaching.

"Even though this is a culinary arts program," explained Neal, "the life skills is the secret sauce because we take the time to care about people and we do it through the vehicle of food."

Lindsay, who faced her own personal challenges while in the program including battling breast cancer, says she learned about handling obstacles.

"It's about yourself," she said. "But you don't get that until you are already into the program. About the 12th or the 13th week, you'll find out that it ain't about cooking."

Her husband Thomas Brown was at graduation to cheer her on. Her praised her, saying, "Instead of giving up she's still trying to accomplish new things in life. That's my baby, that's me hero, that's my queen."

Jewel Felder-James said watching her son Marquise graduate was a feeling that she couldn't put into words. She explained all his life, Marquise had trouble communicating and didn't speak until he was nine. Now, he seems to have found his voice.

"As I go on, growing up," said Marquise, "we go through challenges every single day and we always learn from those challenges."

Felder-James said her son put his mind to it and loves cooking.

For Lindsay, one of the lessons learned was that when you have people around you who care, challenges are easier to face. She said her classmates were like a real family.

"We cry together," she said, "we laugh together, we argue together, we fight together (in class) and we come back the next day like, hello!"