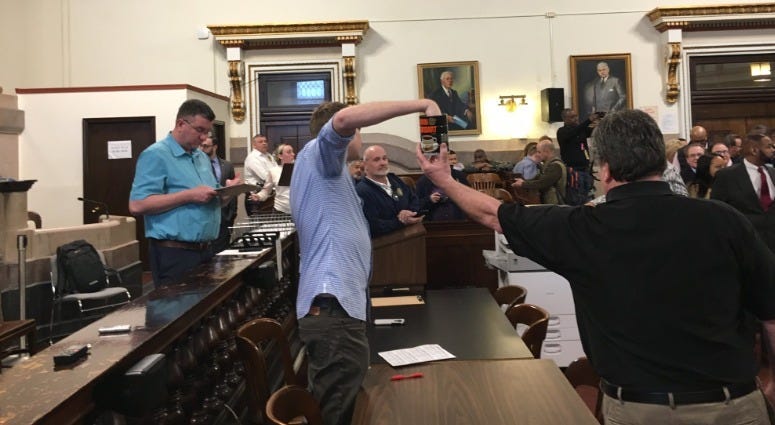 March 20, 2019 03/20/2019 4:20 pm
PHILADELPHIA (KYW Newsradio) — Candidates for Philadelphia city offices picked ballot positions Wednesday for the May primary the old fashioned way: picking raffle balls out of a Horn and Hardart coffee can.
But some of the candidates will still have one more hurdle to clear before getting on the ballot.

The picking of the raffle balls from ⁦@MrHornNHardart⁩ is underway pic.twitter.com/TSlPSQVxTt

There are an unusually vast number of candidates for City Council at-large, so ballot position will be very important. Late Tuesday, however, most of them learned they have another problem. In an odd move, one of the 34 candidates has challenged the nominating petitions of 30 of his opponents.

"I should definitely be successful in court," said Devon Cade, a former Licenses and Inspections employee. He said he used artificial intelligence to analyze the signatures of his competitors.

"My analysis that came out was that most of them were not authentic, were not genuine," he said.

This is a make-or-break move for Cade. He believes he has an air-tight case. If he’s wrong, he’ll have 30 very, very angry opponents.

"Once I got a copy of everyone’s filed petitions, I had it evaluated and looked at and it gave me a very, very accurate read out," he noted, "and that’s when I put the challenge in."

There were 17 other ballot challenges also to be decided, including challenges to five of the at-large candidates; three city commissioner candidates; to incumbent Register of Wills Ron Donatucci; and to several district candidates, notably City Council President Darrell Clarke.

The ballot position lottery goes on, regardless of challenges. The challenges will be heard by common pleas judges beginning Monday. Cade said he’ll ask for judges outside the jurisdiction, since he used to be a city employee.