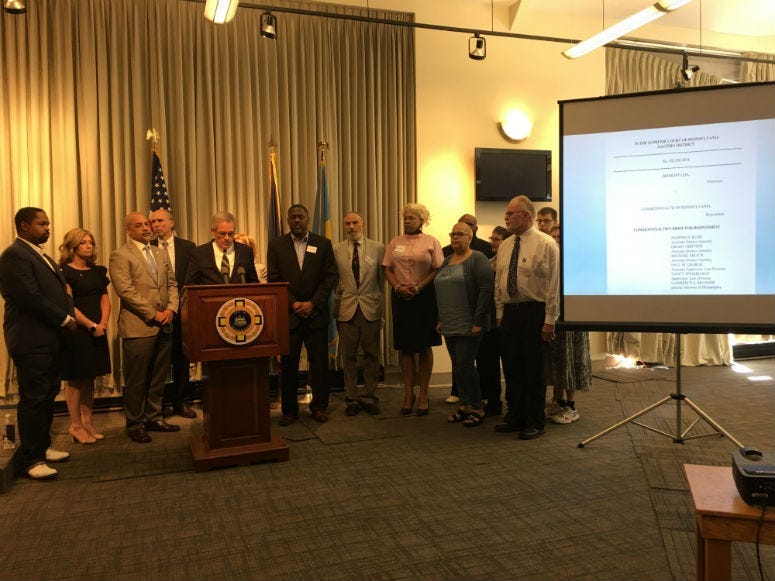 July 16, 2019 07/16/2019 7:00 pm
PHILADELPHIA (KYW Newsradio) — Philadelphia’s district attorney wants the state Supreme Court to rule Pennsylvania’s death penalty unconstitutional. He says it comes down to race and poverty, and he is using one Philadelphia case to advocate for the cause.

Surrounded by fellow prosecutors and community leaders, Larry Krasner said the death sentence is arbitrary and should be seen as cruel and unusual punishment.

"We are not always supposed to be the iron fist of government, we are supposed to stick up for what is right and what is wrong," Krasner said.

He filed a Kings Bench petition for the appeal of Jermont Cox, a Philadelphia man accused of murder and now on death row.

The motion would essentially allow the Supreme Court to rule over any lower court.

Krasner said Cox had ineffective assistance of counsel like most other death row inmates and that court-appointed attorneys, who are often given to low-income minority defendants, don’t do their job.

And he said they get a higher fee if they go to trial.

There are about 140 people on death row, according to a state website. Half are black, and the rest are a majority of white and Hispanic.

music
‘Dancing With the Stars’ producer reveals why Tom Bergeron and Erin Andrews were replaced
sports
US soccer legend's team walks off field after slur allegedly directed at gay player
music
'I was very hard on myself': Lady Gaga reveals the saddest song on 'Chromatica'
music
Stevie Nicks shares the last time she talked to Lindsey Buckingham
news
Hombre roba camioneta para 'ir a encontrarse con extraterrestres'
news
Everything coming to and leaving Netflix in October